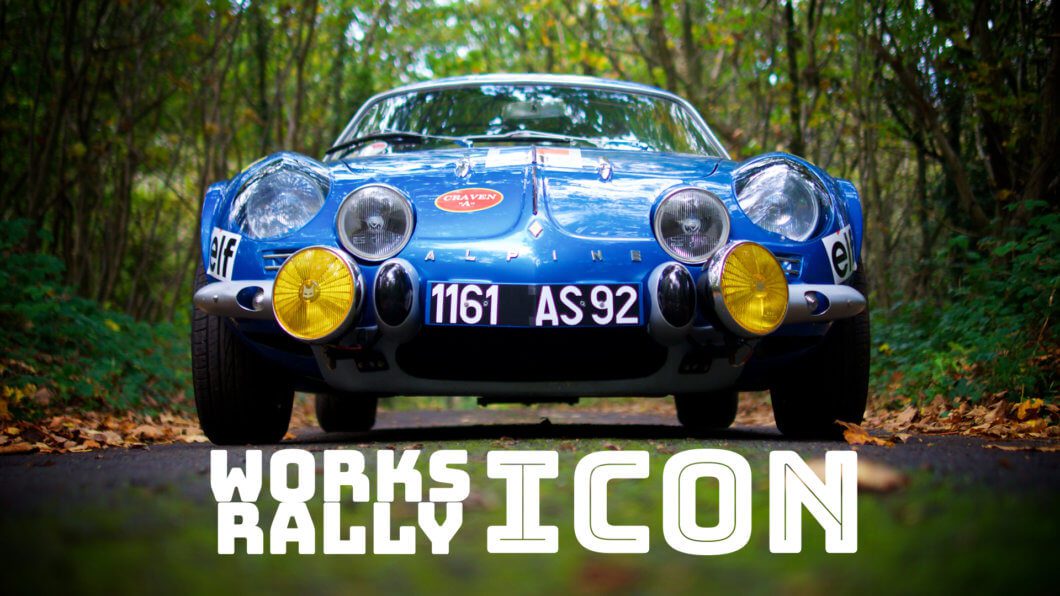 There are very few rally cars that you could say are beautiful. All were built with one purpose in mind. And that was to race and win. Aesthetics usually didn’t come into the design. However the legendary Alpine A110 is one of the very few that managed to combine purpose with beauty. And what a potent package it proved to be.

I first met Nigel Burgess at the St Christopher’s Car Show back in 2016. While doing my usual browse of all the cars on display at the show, I suddenly heard a rasping engine note coming from the show ground entrance. I glanced across the field and spotted a glint of blue moving down the track. I knew immediately what it was!

There is nothing more distinctive than an A110 in the traditional Alpine Blue. As Nigel’s car found a place to park I realised it also had the iconic racing livery one usually associates with the legendary racer. Right before me was the wonderous creation of Giovanni Michelotti and Alpine. It was love at first sight. Like a bee to honey, I made straight for it.

Alpine A110s are rare sights at UK car shows. Adding futher to the excitement was the fact that this particular Alpine was actually a genuine Works rally car, purpose built for the 1969 Tour de France Automobile. Nigel explained that the car was bought by Alpine Works driver Michel Vial. Alpine itself didn’t have the funds to enter a team for the 1969 race and Vial saw an opportunity to enter it himself. So he purchased the car and signed up French racing driver Jean-Claude Andruet.

Andruet was already familiar with the Alpine A110, having raced them in 1967/68 (his co-driver for three rallys in 1968 was non other than Jean Todt). With four wins under his belt in the little Alpine, Jean-Claude Andruet was a favorite to win the 1969 Tour de France Automobile with Michel Vial and his A110.

Unfortunately on the last day of the rally, with only a couple of km to go, the Alpine A110 suffered an engine failure. Determined to finish, Andruet jumped out of the car and started to push. The story goes that a couple of other Alpine A110s came to Andruet’s rescue, shoving him from behind. Then for the final km, he pushed the car up hill and crossed the finish line. Sadly for Andruet the stewards disqualified him from the race for recieving assistance. It was heartbreaking news for the Frenchman, who subsequently collapsed from exhuastion. And so came to an end Vial and Andruet’s attempt to win the 1969 Tour de France Automobile.

The car was then sold to a French couple who raced it in the south of France for a number of years. They later emmigrated to America where it raced for a few more years. It changed ownership once again and was acquired by a fast food businessman. He actually managed to snap up the car just as Nigel had agreed to buy it, the seller deciding that selling it on home soil was much easier than the hassle of shipping to the UK. However, a few years later and as luck would have it, Nigel got word that the car was once again for sale. And so in 1995 he acquired his Alpine A110. It clearly was meant to be!

When Nigel bought the Alpine it was a bit of a wreck. Decades of neglect had taken hold and he embarked on a long restoration, his aim to return the car to how it looked for the 1969 Tour de France Automobile. And what an honour that was. While the car didn’t win in 1969, it was a genuine works rally car with racing history and was driven by Andruet, who would later go on to win the 1973 Monte Carlo Rally. So it is pretty special.

And speaking of pretty… I mean just look at it… the Alpine A110 is the kind of car you could just stare at for hours. The lines and curves penned by Michelotti are just wondeful. But underneath all that beauty is a car of real purpose. The single spine chassis makes the car extremely light and allowed for the use of a fibreglass body. With an average weight of around 680kg, this was a very light car. Everything was pared back to save weight. For example the fibreglass was made much thinner than on standard road cars. It is wafer thin in places. And even the door hinges were drilled out in an effort to get the weight down.

Of course all that effort has to be backed up by a good engine and the Alpine uses the 1.3ltr R8 unit tuned by Gordini. With twin 45 DOCE Weber carbs, it produced around 125BHP, which is a lot for a car this size. All the weight was at the back with the engine sitting over the back axle. Adding to the rear weight bias was the 80 litre fuel tank… so you can see why they were brilliant at hillclimbing. Even standing still the car sits very squat at the rear, the sump guard just inches off the ground. Interestingly the engine in Nigel’s A110 appears to be a larger capacity unit, potentially putting it closer to 1.4ltr rather than 1.3ltr. This he believes is due to the stepped bores in the cylinder block which aren’t standard for a 1300 A110. So this makes Nigel’s car even more interesting and rare.

Firing up the compact four cylinder produces a fantastic rasping note. The whole car shakes and vibrates, the exhaust crackling and popping like an angry little fire breathing dragon. You can tell it is the kind of car that wants to be driven fast and hard. With twin Webers it just doesn’t like ideling as it coughs and splutters on tick over. But once Nigel pulled away, the engine started to sing.

Going up through the gears and pushing the engine hard, you could tell this is what it was built for. The Gordini unit loves to rev and at the top end of the rev range, the car feels and sounds wonderful. It’s like watching a Spaniel tear off in to the distance after it has been let off the lead. It darts forward, hugging the road with that planted rear end. And seeing in blast along the forest road, it really felt like a scene from a rally. All we were missing were legions of insane rally fans risking death as they cheered from the road side.

The raw experience that the Alpine A110 gives does have it limits in terms of comfort. Hopping in and out is a bit awkward and the noise in the cabin is ear bleeding. Especially on a long drive. I can see why Nigel said he wears ear defenders when driving for more than an hour. On the plus side though the windows do roll down the whole way, unlike other rally cars that love to roast their occupants. So at least you can feel cool whilst looking cool.

But that is the price you pay for owning a slice of rally history. It is one I would gladly pay to have an Alpine of this calibre in the garage. The Alpine A110 is one of the all time great rally cars, an icon from the world of rallying. And it is quite the looker as well!

Additional Photos of the Alpine A110

One of a kind Simca 8 Gordini heads French sale