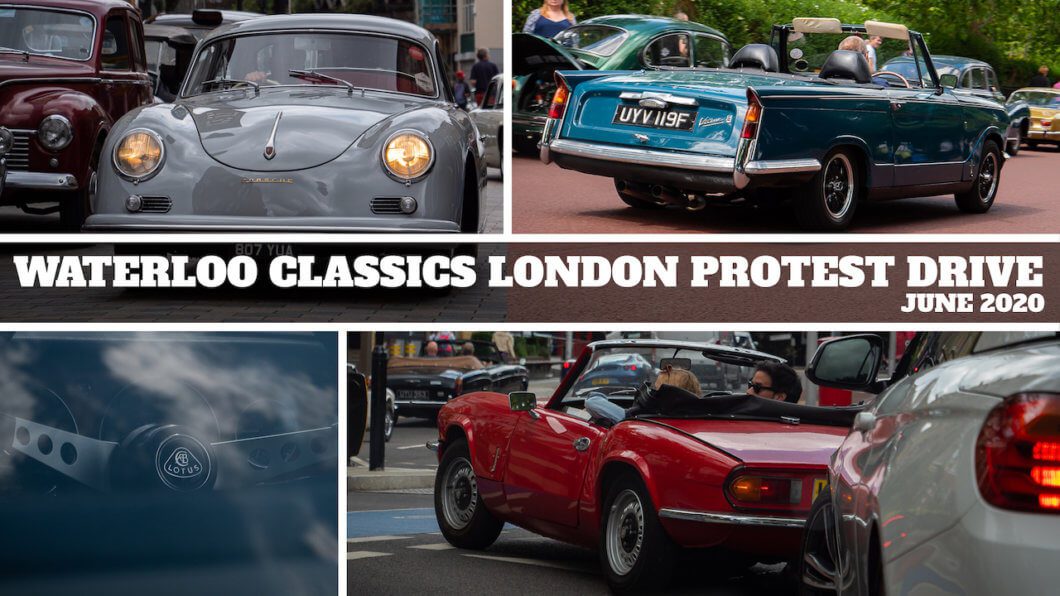 On Saturday 20th June the Waterloo Classics Car Club staged a successful protest drive through central London. The event saw over one hundred classics descend on the clubs monthly meet spot of Lower Marsh Market, which marked the London based car clubs first gathering since the easing of the COVID19 lockdown restrictions.

The protest was organised by Waterloo Classics founder Darren Sullivan Vince to highlight the planned closure of some of London’s streets, which will see non-essential vehicles banned from entering the city. These new car-free zones will prevent classic car owners and even supposed eco-friendly EV cars from driving in certain parts of London.

Commenting on the protest Darren stated: “Our protest drive was a huge success. People were able to drive through London for the last time. From Monday 22nd June, the vast majority of people are effectively banned from the centre. They say it is temporary, but we know that is not true. The changes to the street layouts show they want to keep cars out forever. I want to thank everyone who joined for putting up with the traffic and making the day a fun success.”

“When I began organising the day, I pictured 20 to 30 cars. The feedback I received made me revise that number up to 50. I was stunned to see well over 100 car! The majority of them made it to Regent’s Park which was fantastic.”

“I am planning another drive for next month. This one will be outside the centre where the streets are more clear. A park or a stately home will be the destination. I am thinking we can maybe even have a picnic!”

Indeed the gathering of classics cars on Lower Marsh road, which also falls into the ULEZ charge zone (a cost that even some classics are sadly not exempt from), was the largest the club has seen for some time. For many owners it was also their first opportunity to get their classic out and onto the road since the lockdown restrictions first began in March.

At the time of the protest, 2M social distancing measures were still in place, which meant attendees couldn’t gather around each others cars and have a bit of car banter as before. Despite the restrictions however, it was still a great opportunity to catch up with friends and their cars, even if it meant just waving and shouting greetings from open car windows.

As always the selection of cars that gathered at Lower Marsh road near Waterloo Station was impressive and the convoy that set off on the planned route through the city turned many heads. The drive had to contend with some last minute changes to the route due to other protest events taking place in the capital. Thankfully those other protests didn’t impact the convoy and the London Metropolitan Police helped advise on the clubs route.

Traffic in the city was quite heavy on the Saturday as the sunny weather brought out the crowds, with many anticipating an easing of the lockdown restrictions later in the week. A few of us got lost on the route (Take to the Road’s own Bertone x1/9 for example) but everyone eventually made it to the final destination of the protest drive which was leafy Regents Park. The gathering of so many classics caused quite a stir and transformed the typical mundane street parking into a much more visually pleasing spectacle.

With social distancing rules relaxed somewhat, here’s hoping that Waterloo Classics will be able to return to its regular monthly schedule in the not too distant future.