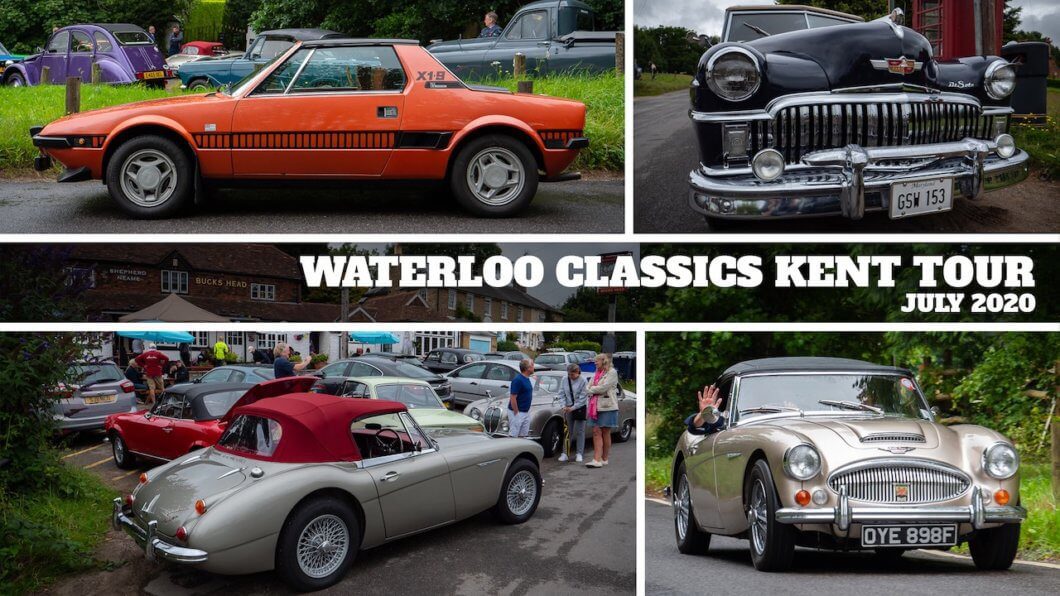 The Waterloo Classics Car Club held it’s first driving tour out into the Kent countryside on Sunday 19th July. As many as fifty classic cars of all ages and marques gathered in Blackheath for a leisurely drive to the Bucks Head pub in the sleepy village of Godden Green, just on the outskirts of Sevenoaks.

The driving tour was the clubs first event after the very successful Protest Drive in central London, which took place last month.

A blip in the fine summer weather last Sunday threatened to turn the drive into a complete washout but thankfully the worst of the rain held off, allowing club members to gather for a socially distanced picnic.

The country driving tour was a first for the London club, which has had to make the unfortunate decision to end its monthly meet at Lower Marsh in London. The decision by Transport for London to include that part of Waterloo in the ULEZ and Congestion Charge zones means that many classic car enthusiasts, who would have taken their car to Lower Marsh for the Saturday monthly meet, would have to pay these charges. Which would make it an expensive day out indeed. As a result club founder Darren Sullivan Vince has taken the decision to replace the meet with driving tours out of London, while the hunt for a replacement location for Lower Marsh, outside the ULEZ and Congestion Charge zone goes on.

The driving tour began at 10am on the Sunday morning in Blackheath, with cars gathering at the bottom of Price Charles Road to make the journey south into the county of Kent. The route chosen avoided as much of the motorway network as was possible, giving drivers the opportunity to explore the countryside and allow their cars to enjoy a more relaxed drive on the back roads of the county.

The destination for the tour was the quaint Bucks Head pub, located just a few miles south east of the centre of Sevenoaks. The club had booked ahead with the pub owners, which was open for take away lunches. As the tour arrived for lunch, the village green quickly filled with classic cars of all shapes and sizes, bringing a splash of colour and character on what was a cloudy and dull day. With so many venues closed due to the lockdown, the pub was more than delighted to cater for the arrival of a large group of classic car owning visitors, the boost in numbers was certainly very welcome for the business.

After lunch the tour headed north in the direction of London once again, with a final pre-booked stop at the picturesque Hever Castle. It was a nice end to a very good driving tour and a fitting way to get the club back to its monthly meet, in a slightly different, non static format.

Waterloo Classics Car Club will be hosting another driving tour soon and Take to the Road will be there to bring you the highlights once again.