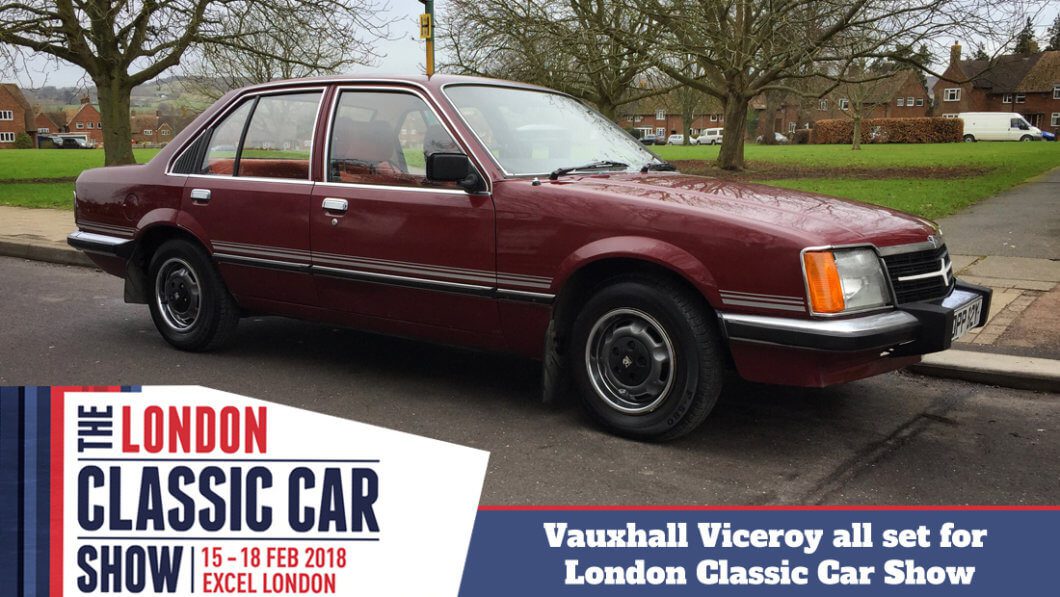 It’s been a bit of a close one but the rare Vauxhall Viceroy is finally ready for it’s big day out in capital! Yup! It is going to the London Classic Car Show tomorrow morning. As always with classic cars, if there is a deadline looming, it is going to come down to the wire. And this car pushed it very close indeed. I finally finished off prepping the big saloon this afternoon. It has been a bit of a marathon effort to get this car sorted. And at one stage last week I didn’t think it was going to make it! But it has… what a relief!

The past few weeks were touch and go as the Viceroy’s Zenith carb problems continued. I did mutter to myself at one point “why didn’t I just get a car with fuel injection!” It sure would have been easier. Despite the carb rebuild and the new starter choke, it still wasn’t running right and needed to be tuned. It was still hard to start, the choke flap wasn’t working the way it should and the Viceroy was running rich… very rich!

Thankfully the team at Four Ways Classics came to the rescue and they got the Viceroy running the way it should. It turns out one of their mechanics has been a Vauxhall guy for many years, so he knew what to do to sort it out. So now the big saloon starts first time, even on a cold frosty morning. And the idle issues, associated with the choke setup, have been fixed. So it is running as sweet as a nut, as they say.

I collected the car from Four Ways last Friday morning, which meant the pressure was on to actually get the car cleaned and presentable for the London Classic Car Show. The whole car needed to be detailed inside and out and since this hadn’t been done for many, many years, hours and hours of graft lay ahead.

On the plus side the interior just needed a good dusting and wipe down and just lots and lots of localised cleaning. And it sure did scrub up well. One of the cars selling points for me (apart from the story), was the interior. It really does look superb. All original and unmolested! Which makes this rare car that bit more special!

The outside of the Viceroy took a lot more work and this was down to the paint. Since pretty much every panel has oxidised, it made the task of cleaning a lot more time consuming. I deployed my usual method of a rinse, snow foam, rinse, another coating of snow foam before getting down to hand washing the car. All using the two bucket method of course (one for shampoo, the other for rinsing).

With the Viceroy’s body work washed it was now time for the decontamination phase. Which meant getting out the clay bar and slowly removing all the contaminants off the paint. And as the paint on the Viceroy was 36 years old, it was pretty mucky. After the time consuming but rewarding task of claying the car, it was now time to start polishing.

For this task I was testing the UF8 Dual Action polisher, which was kindly sent to me by Ultimate Finish (watch the video review here). As the paint on the Vauxhall Viceroy was badly oxidised, I needed to cut through the top layers of damaged paint with a cutting compound and then refine it with a fine polish. Working in very cold conditions and fighting the rain (the Viceroy takes up a lot of room in the garage so has to have one end stuck out the door… yup it is a big car!).

After 5 hours of toil on the bonnet, I came to the realisation that the paint on this car needs to be wet sanded. I managed to remove the oxidised layer, but what it then exposed was decades of swirls and scratches. Millions of them! It was then I knew I had no chance in hell of getting the Viceroy polished. I had simply run out of time! So all I could do was wipe the panels down and apply to wax to protect the paint. It was disappointing but as least the UF8 did a good job on making the bonnet look a bit better. I’m sure it will manage the wet sanding phase well.

So in all I have spent the past four days getting the Vauxhall Viceroy ready for the London Classic Car Show. The last few bits of cleaning, like the glass and tyre dressing was finished today, along with a wipe down of the cars original General Motors rubber mats. It has been a lot of work and not a huge amount of fun especially with the weather hovering around a real feel of 1 degree celsius! But the Viceroy is now ready for it’s big day at the capital’s largest classic car show!

If you are attending the show come and say hi to me and the big Vauxhall on the Waterloo Classics Car Club Stand. The stand number is CC10. I will be there Thursday, Friday and Saturday. It will be a fun few days and I can’t wait to see what the public think of my rare and interesting piece of British and German motoring.

Watch our exclusive interview with Jonny Smith of 5th Gear at the London Classic Car Show with ERS Insurance.