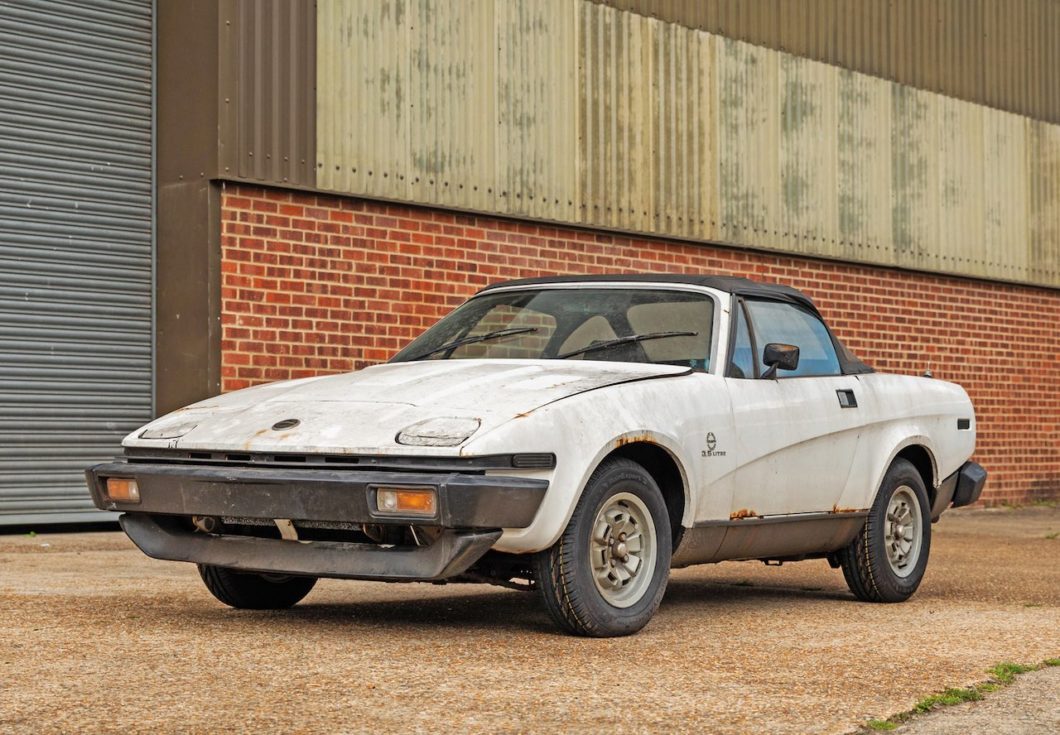 A rare and unregistered pre-production 1980 Triumph TR8 with just 73 miles on the clock will be auctioned by Historics on the 25th September at its Autumn Sale at Ascot Racecourse.

The Triumph TR7 was British Leylands answer to the very successful TR6, with the re-structured car maker pinning its hopes on its new coupe and later convertible. The coupe, which was the first iteration of the model to go into production, was unveiled in 1975 and was designed by Harris Mann. The new wedge inspired sports car was to lead the Triumph brand in a new direction, but divided opinion on its debut. The convertible, which was referred to as a drophead coupe, was penned by Giovanni Michelotti and arrived in the US market in 1979.

Indeed Take to the Road is very familiar with the TR7 having featured a very nice example of the British wedge in 2015. That very car has since gone on to be converted into a “TR8”, a transplant that has been carried out to numerous TR7s through the ages.

British Leyland always intended the TR7 to feature a V8 engine but it debuted with the Dolomite based 2.0 litre four cylinder engine, which produced 105BHP. More power was needed however, especially for the US market. British Leyland utilised the 135BHP 3.5 litre Rover V8 and renamed the car the TR8. The majority of examples were exported to the US, making UK market TR8’s very rare indeed.

The car being offered by Historics on the 25th September is one such rarity, a right hand drive TR8 convertible with a mere 73 miles on the clock. This particular car is one of 14 examples and was purchased new by the owner and never registered. The cars build has been verified with a British Motoring Heritage Certificate, which confirms it was built on 12th November 1980.

Finished in Pendelican White with a tan interior, the heritage certificate for this TR8 automatic convertible also confirms the cars pre-production status, or as the factory called it “method build”, which makes it very rare indeed, especially in RHD configuration. This essentially means the car was one of the first TR8 models created in order to work through build snags before going into full production.

The turbulent history of British Leyland has long been documented and this TR8 was caught up in the turmoil that befell the British car maker in 1980. Production of the sports car that was supposed to turn the firm around was cancelled in 1981 after poor sales. The car was sold during a factory clearout and was acquired by the present owner who subsequently put the car in storage. It would remain locked away and unused for 41 years.

While the TR8 has covered just 73 miles from new, it is not in as new condition with surface rust present on the body work. As a result it will need a full restoration to return it to its former glory. Given its pre-production status and the fact it was never registered, coupled with what could be described as “delivery mileage”, this rare TR8 convertible needs to be acquired by a national museum. The question is though, should this example be preserved as is or restored to its original factory condition? Perhaps a nut and bolt restoration could reveal some more details about British Leylands “method build” process. However there is a very strong argument for preserving this car as is. The chances of the other pre-production TR8 having survived are low, which means the example for sale is quite possibly the only un-restored pre-production TR8 in the world. Which in itself is significant.

What is certain however is the fact that this Triumph TR8 is a piece of British motoring history and will undoubtedly attract a lot of attention when it crosses the auction block. Will it be destined for the British Motor Museum or another private collector? Only time will tell.

More details on this 1980 Triumph TR8, which is being offered with no reserve, can be found on the Historics website.