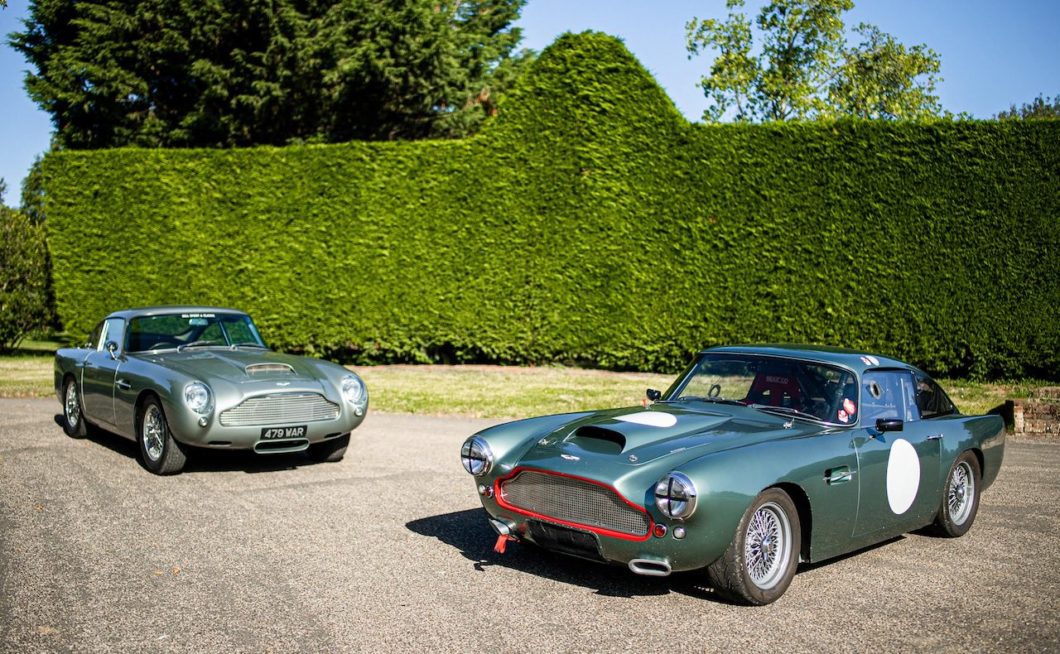 Bell Sport and Classic is offering for sale two outstanding Aston Martin DB4 models. Both car present one of the most desirable combinations of roadgoing and track-focused historic cars available anywhere in the world right now.

The first is an extremely rare and desirable 1960 Aston Martin DB4 GT ‘Recreated’, upgraded to full GT specification, just like the original lightweight limited-edition machine which first appeared in 1959. Supplied to its first owner as a standard DB4, the car was converted in 2002 with the work carried out by Goldsmith & Young, a renowned Aston Martin restorer in Wiltshire.

Like the original DB4 GT, which was a roadgoing sports car that enjoyed considerable success on the circuit, the DB4 at Bell Sport & Classic has enclosed headlights and a shortened wheelbase, doing away with its rear seats (instead sporting a vintage suitcase secured with leather straps), while the period correct GT-spec fuel tank is found in the boot.

However, whereas the original DB4 GT had a 3.7-litre or 3.8-litre engine, this car has an enhanced 4.2-litre engine with Cosworth pistons. The cylinder head is the twin-spark option correct for GT spec, working with twin distributors. Both inlet and exhaust manifolds are in line with GT specification, while triple Weber carburettors are recently installed.

The David Brown gearbox has been upgraded to accommodate overdrive, while the car also features aluminium brake callipers with a remote servo. The suspension is also uprated, giving a lower, sportier stance with adjustable linkages, while also included is a lengthy history with photos documenting the conversion process.

Joining the DB4 GT ‘Recreation’ in the Bell Sport & Classic showroom in Hertfordshire is a 1961 Aston Martin DB4, presented in full competition specification.

Supplied new to the UK market as a standard RHD car, the DB4 was used for sprinting and hill climbing throughout the 1970s and 80s, after which it was subject to conversion to lightweight specification, completed by RS Williams, Aston Engineering and Ian Mason – all acclaimed Aston Martin heritage specialists.

Subsequently sold to a Japanese collector, it was entered into events sparingly in the 1990s before being brought back to the UK. Upon its return to British shores, the car was bought by Irish peer, Lord Conor O’Brien, who raced the DB4 for 12 years from 2000, competing in 97 events and only failing to finish in three. The car changed hands once more with its most recent owner campaigning a number of Aston Martin Owners’ Club and other events.

Power comes from a 4.5-litre version of Aston Martin’s famous in-line six-cylinder engine producing in excess of 410bhp and with a full roll cage, racing seat and six-point harness, it represents the complete competition package and is ready to enjoy on the circuit.

Tim Kearns, Managing Director of Bell Sport and Classic, said: “These DB4s are presented in exquisite condition, representing two meticulously prepared takes on the theme of road and track. The DB4 GT ‘Recreation’ has been sympathetically and credibly upgraded to GT specification with the added bonus of an enhanced engine. Given the prices of original DB4 GTs and also Aston Martin’s recent run of continuation cars, this superb machine marks a unique opportunity to enjoy an authentic experience at a fraction of the cost.

“For those who want to take to the track, our DB4 racing car is one of the finest competition cars we have seen. It is ready to run straight away in any number of events. Without doubt, these two cars are arguably one of the most desirable pairings of historic Aston Martin models on sale in the world right now.”

More details on both Aston Martin DB4’s can be found on the Bell Sport and Classic website.