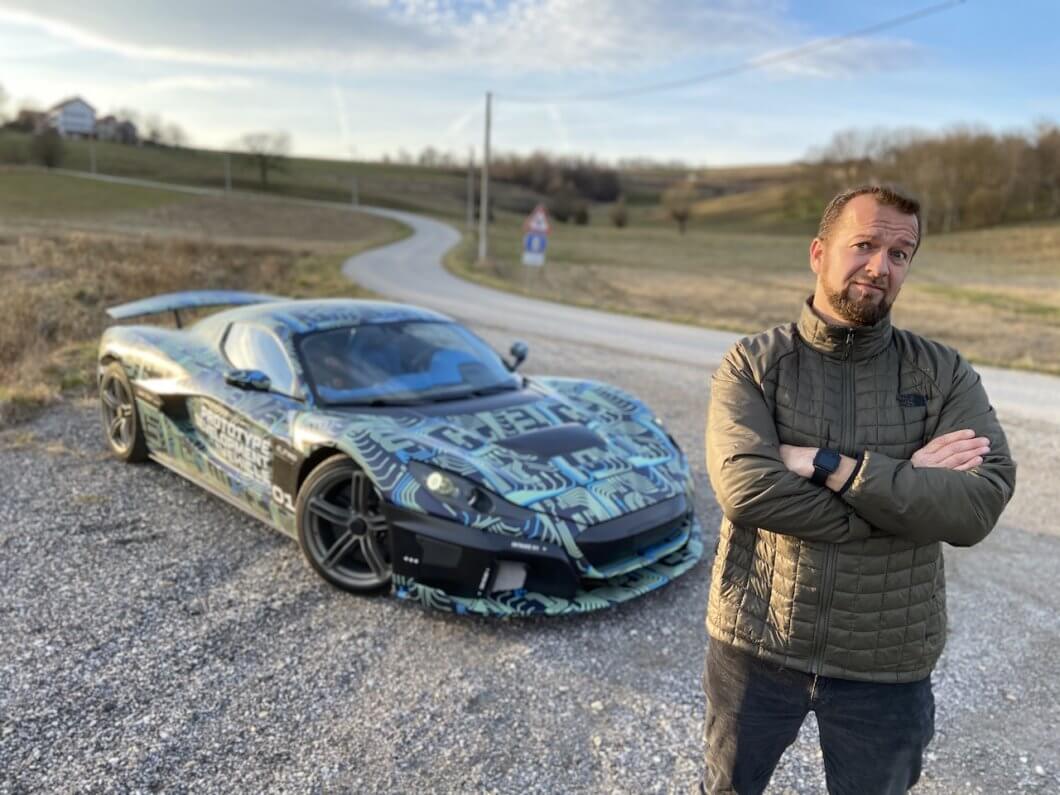 Self confessed petrolhead Tom “Wookie” Ford has landed on Motortrend with has brand new show Hard Cell. In this new series he takes a look at the electric car future to find out what is out there and what we can expect. Do EV supercars exist and will they have the same appeal of their petrol powered rivals? Take to the Road got the low down from Tom in this exclusive interview.

Your new show Hard Cell has now debuted on Motortrend (12th April). As a dyed in the “Wookie” wool petrolhead was the show concept a hard sell to you? (no pun intended)

Tom – Ha ha ha yeah… it’s not really as I’m into the tech and I love the optimisum of EV. Any new power train usually floats my boat. What I don’t like about EV is this sort of tribalism, the sort of “well I liked them 10 years ago so you have to like them now”, you know that sort of opinion. All EVs don’t have to Nissan Leafs or Renault Zoe’s, I mean I do deal with them in my other job with Top Gear. But please keep talking about these other EVs that are absolutely crackers! But no one seems to be driving them. So the idea of the show was to actually go and see whether these EV supercars actually measure up and come to it from a slightly cynical ask. So while we are into it, we’re not going to be fobbed off just because they are EV. And the idea was we’d go a look at a whole load of different types from adventure cars (off roading and mucky stuff), then super cars and motorsport. You know they all seem to have been coming for ages and I wanted to see if they had actually arrived.

Do you think EV Supercars are leading this new field as they have done for ICE for many decades and are the traditional players in the field playing catchup?

Tom – You’ve hit the nail on the head there! EV will murder ICE cars for performance. You can’t get away from that. And what I think it is going to do is it will push ICE cars into being more about ability and feel and about how they make you feel. Rather than about raw stats. There’s just going to be no point in doing 0-60 time comparisons. It won’t matter as it there will always be a car that is faster. People do worry that we won’t have any more Lamborghini’s. Well we will, but we’ll just have lots of different styles of car as well. EV will not replace everything. But they do make you smile. Like the Renault Alpine A110, it’s not the fastest car in the world but why has it been a success? Because it makes you feel stuff, it drives a certain way and its got character. But for super cars like the Pininfarina Battista, they are only making 150 globally… they are more like rolling tech art work really. It’s when we get an electric Alpine A110 or a Porsche Boxster, that’s when it will get super interesting.

The numbers for some of these electric supercars are scary. And given the engineering efforts its taken to get ICE V12s etc to deliver huge power, does EV make it look a bit easy?

Tom – It absolutely ruins Top Trumps! Ha ha! You know I drove a Lamborghini Aventador in one of the episodes around the hills in Italy, to try and figure out what a supercar was, you know as my datum point. And I was like you can’t do this with electric! This thing was spitting fire, it sounded like someone had set fire to the sky. It was amazing and it was theatrical, very stupid and not very good at somethings. But honestly I didn’t care. Then you go and jump in an electric supercar and it delivers its power in one great big tidal wave of torque. It doesn’t have the pull and push that you get with an ICE engine. So you drive it completely differently. Its not worse and its not replacing it, I can guarantee it.

The new Porsche Taycan looks like it will be a game changer for the firm. Will it be strange to not associate a Porsche with that legendary rear engine and the amazing history it created?

Tom –  That’s the thing really… how do you get Porscheyness into something that doesn’t have a flat six? So I got behind the wheel of a lovely old school Porsche 911, mainly because I just wanted too. And I drove an original 1953 911 and a 1976 911 Turbo, which was from the year I was born and then a Porsche 911 R. So it was a case of how do you get that Porsche feeling into a car with an electric powertrain? With every episode we did I wanted to pose the question of whether electric supercars actually exist. And the Taycan is something special.

Do you see EV as the future or just a stop gap until hydrogen because easier and cheaper to make?

I think we petrolheads just have to get over the thinking that EV is going to usurp everything. ICE is going to run alongside for a good while yet. And we should celebrate it and have a bloody good laugh. I mean I’ve road tripped in Hyundai Nexo hydrogen car across Norway and it depends on infrastructure more than anything for that sort of stuff. That’s the bit that needs to move quickly and oil doesn’t want it too. But the tech is moving quite fast which is what I like. Its a progression really, we need to people used to the idea of EV. But I’m just into cars man, I just really like cars.

Out of all the EV vehicles you drove on Hard Cell which one impressed you the most?

One or two… it would either be the Porsche Taycan as that’s the most sorted semi sporting EV I’ve driven to date. But there’s the Extreme E which is an off road buggy racer… its just an off road race buggy with twin motors and 550BHP! I jumped it off loads of stuff and it did great and therefore I thought it was amazing! Plus I managed to get one over on Ken Block with it. So that’s the one I’d take home.