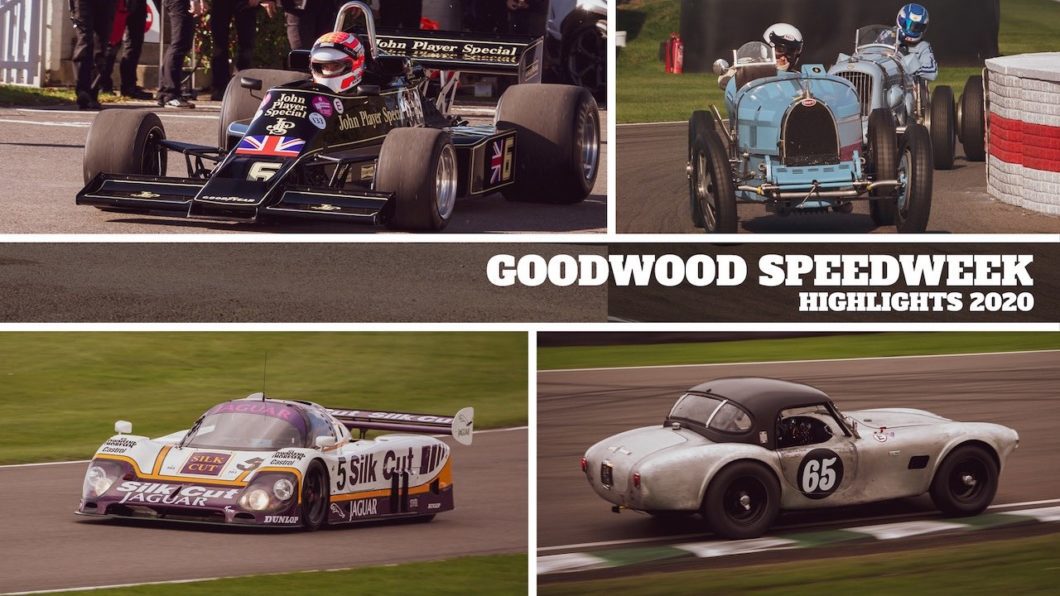 It may seem a little over dramatic to say that last weekends Goodwood Speedweek was a miracle. But given the way 2020 has turned out, with so many other automotive events cancelled or postponed, the very fact that Speedweek went ahead was miraculous. Which makes this new alternative Goodwood event worthy of celebration.

For devoted petrolheads Goodwood has always held an almost religious like significance, ever since the circuit was reborn back in 1993. It has become a place of pilgrimage ever since, welcoming hundreds of thousands of motorsports fans every year. So when at first the 78th Member Meeting was cancelled and then the Festival of Speed, it quickly became clear that the great Goodwood Revival itself was at risk. And as the weeks and days drew ever closer, the event to rescue the season, Goodwood Speedweek itself teetered on the very edge.

When the invite to attend the Friday and Saturday arrived in the inbox, it felt like a small victory. It was one that was tinged with a great deal of anxiety however, because despite the green light, the axe could fall at any time. Goodness knows how Lord March and his team must have felt, as the daily news reports confirmed COVID19 case numbers were rising rapidly across the country. It has been a very difficult year for the Goodwood team. That goes without saying.

Arriving on site then on the Friday morning, all those anxieties were swept away by the sound of race engines being carried on the gentle morning breeze. After collecting my wrist band, I made my way to the pits to watch the St Mary’s Trophy Part One Official Practice. Realising the significance, I took a moment to pause and drink it all in. Goodwood was back and it felt fantastic.

The motorsport action that took place on the 16th, 17th and 18th October was a superb “Best of Goodwood”, a jam packed calendar of racing that made the most of what the circuit has to offer. Never before has the Goodwood race schedule looked this busy, with the weekends action live streamed across the internet and social media platforms.

Plus there was the live coverage from ITV as well, so the fans watching at home were guaranteed a slice of the action. And there were plenty of celebrity presenters to report on the weekends action too.

The oldest racing on the calendar at this years Goodwood Speed was the SF Edge Trophy, which saw Edwardian era race cars (up to 1923) take to the track. The race is named after Selwyn Francis Edge, who was a keen racer and record breaker of the Edwardian era. Watching these fantastic old machines of all shapes and sizes fly around the track was a real step back in time moment.

It was a taste of what was missed at the Goodwood Revival, which was added to further by the Goodwood Trophy. This was a twenty minute race for Grand Prix and Voiturette cars that would have raced between 1930 and 1951. These wonderful machines added a real sense of beauty to the weekend, each one representing the pinnacle of motorsport engineering from the golden age of racing.

Wandering round the paddock in between the racing, the familiar buzz was still present. The lack of spectators meant it was a lot less hectic than usual on a race weekend, but it was still a hive of activity with mechanics beavering away on the cars, going through last minute checks before they headed to the track.

There were some familiar sights too with Ludovic Lindsay and his Faberge Ford Capri which featured on Take to the Road back on 2018. The original Works Capri would later see action in the Gerry Marshall Trophy.

Another fantastic addition to the racing schedule over the weekend was the St Mary’s Trophy. This saw two races with a brilliant mix of saloon cars from 1960 to 1966. It was a star studded lineup with the likes of Mark Blundell, Karun Chandhok, Tom Kristensen, Jochen Mass, Stig Blomqvist and Rowan Atkinson, to name just a few, all in action.

There was also a very poignant moment at Goodwood Speedweek with the Stirling Moss Memorial Trophy. Originally the Kinrara Trophy, it was renamed in honour of the late Sir Stirling Moss. And like the Kinrara, it too raced into the evening with the dusky conditions adding something extra magical to the special event.

Another star attraction at Goodwood Speedweek was the 70 Years of Formula 1 display which brought some historic legends to the circuit. Seeing and hearing these amazing machines fly around the Goodwood track was quite something.

There was also a mighty tribute to Le Mans over the weekend with some absolute legends of the worlds greatest endurance race on display. Icons from Porsche and Jaguar took to the track for a mouthwatering display of speed and power. Watching these monsters as they approached the sweeping turn at Madgewick really was an unforgettable moment!

A beautiful cross section of racing Jaguar’s were also on show, with a demonstration of Tom Walkinshaw’s greatest achievements as a Jaguar team boss. Thirty years on from his final Le Mans win, the Performance Demonstration showed off these amazing Jaguar’s in the best way possible.

Looking back over the two days at Speedweed, there was an overwhelming sense of relief that it went ahead. There is little doubt that the greatest sigh of relief would have come from the Duke and his team. They really are to be commended for staging a brilliant event under such difficult circumstances.

Speedweek suceeded in capturing the very essence of what makes Goodwood special. The diversity of the action and the machinery on show could not have been better. All that was missing was the spectators, whose absence was very notable in the empty stands and the viewing areas that line the circuit.

While the atmosphere and the buzz that the crowds bring to Goodwood was not quite the same, this latest incarnation of racing at the historic track was the compromise everyone had hoped for. Owners and drivers finally got the chance to get their cars out on track, blowing off much needed steam in the process. For fans, the live stream and TV coverage meant they could still enjoy the action. And for us press, it was both incredibly satisfying and fortuitous to be able to attend such a prestigious event.

So the sun has set on the very first Goodwood Speedweek. It was indeed a miracle… a long overdue tonic… the perfect outlet for pure petrolhead escapism. As compromises go it offered the best of both worlds. The spirit of Goodwood has endured and with the historic racing calendar now coming to an end, we can look back on the success that was Speedweek and look forward to 2021.