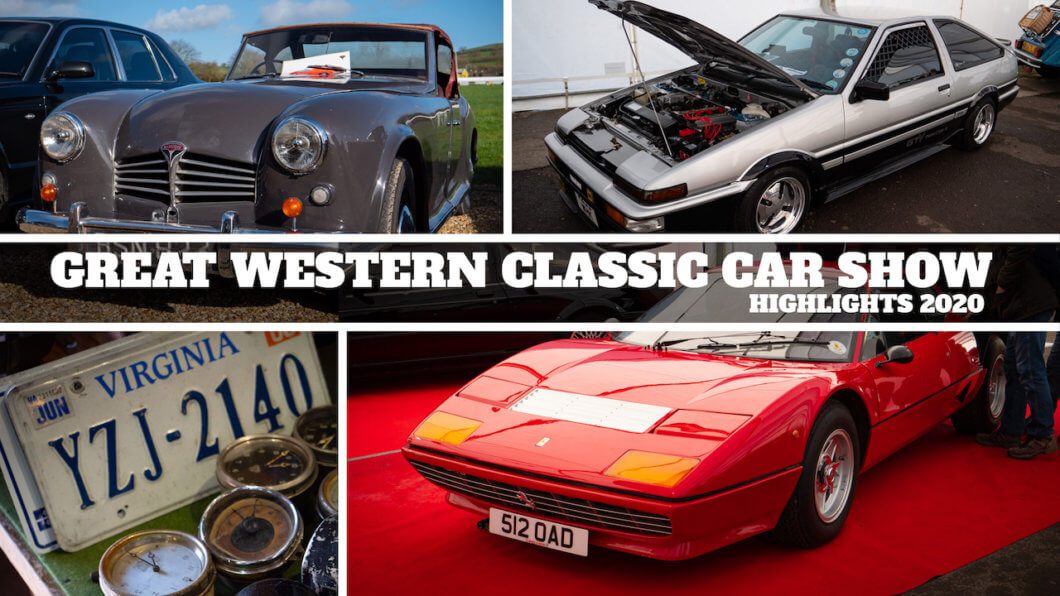 Crowds of classic car fans descended on the Royal Bath and West Show Grounds over the weekend for The Great Western Classic Car Show. The first major show of the year in the south west took place on Saturday and Sunday last weekend, with the majority of enthusiasts taking advantage of blue skies and dry sunny weather that luckily blessed Saturday’s attendees. Which was essentially the calm before Storm Ciara, which arrived in full force in the South West later on that evening. Take to the Road paid its first visit to the Show Grounds and here are some of the stand out cars that caught the eye. There were quite a few!

Attending a car show in winter is always a bit questionable thanks to the weather, with many owners simply refusing to let their pride and joy out onto the roads until as late as May. The Great Western Classic Car however didn’t disappoint as the number of classics on display was truly impressive. Cars from all eras flocked to the Show Grounds and wowed the crowds that came to see them.

The main display at this years show was provided by the Haynes International Motor Museum, which is based just ten miles away from the Show Grounds. The museum’s very own Ferrari 512BB and a Ford Sierra RS500 Cosworth formed the centre piece of the new 1980s marquee, with other notable cars from the 1980s taking pride of place alongside the Ferrari and the RS500 Cosworth.

The Ferrari 512 BB’s Boxer Flat 12 engine was rebuilt at the Haynes Workshop and Restoration Centre, after it was discovered to be consuming too much oil. It was completed in April last year and is one of the museums star attractions.

The 1987 Ford Sierra RS500 Cosworth on display was one of just 500 created by Tickford Engineering. Available in just three colours, black, white and blue, the RS500 cost £4,000 more than the “standard” Sierra Cosworth at the time. The Touring Car versions were tuned to a massive 500BHP, but the road cars were given a more modest 224BHP tune, making them one of the fastest production saloons of the late 1980s.

One of the other 1980s gems that graced the marquee was a rare and impressive slice of JDM gold, a 1983 Toyota Corolla Twin Cam hatchback. Imported from Japan in 2015, the current owner has carefully restored it back to original specification, with some mild custom tweaks here and there along the way.

Badged as a Toyota Sprinter Trueno in its home market, the AE86 series was powered by the same 1.6 litre engine as found in the Toyota MR2. These Toyota Twin Cam’s are a very rare sight on UK roads and are highly sought after, especially in two tone silver over black.

Another rare slice of JDM engineering to feature in the 1980s marquee was a super clean 1985 Toyota Celica Supra Mk2. This example looked stunning in black and is one of just 19 manual transmission Celica’s left in the UK.

It is a matching numbers car and has covered over 150,000 miles on its original engine. The current owner had it resprayed last year and its condition is a credit to its owner.

Wandering through the outside classic car display quite a few other gems were spotted. The stand out was an incredibly rare 1951 Marauder Tourer. Based on the then new Rover 75 chassis, the Marauder was created by George Machie and Peter Wilks. Both were ex-Rover engineers who decided to break away and form their own company. The fruits of which was a two seat sports tourer.

Just 15 examples were built from 1950 until 1952 and utilised the Rover 2103cc straight six and the four speed manual with overdrive. The cars existence was unfortunately short lived after rising costs and a new Government luxury car tax brought production to an end in 1952.

Other standouts from the car park display included a rare RHD VW Golf Mk2 Syncro 4×4, a very nice and equally rare Audi 80 GT two door saloon, plus another bright yellow saloon in the shape of a cool and very retro Hillman Avenger Tiger.

Also taking part in the weekends classic car gathering were Charterhouse Auctions, who had an interesting selection of classics up for sale on the Sunday.

There was also a great selection of traders in the main hall selling a vast selection of car parts, tools and accessories to satisfy the needs of most enthusiasts fixing up their classics. The Great Western Classic Car Show really was a great day out and the selection of cars on display were a credit to the owners, who likely broke their cars winter hibernation to show them off. Full credit to them!