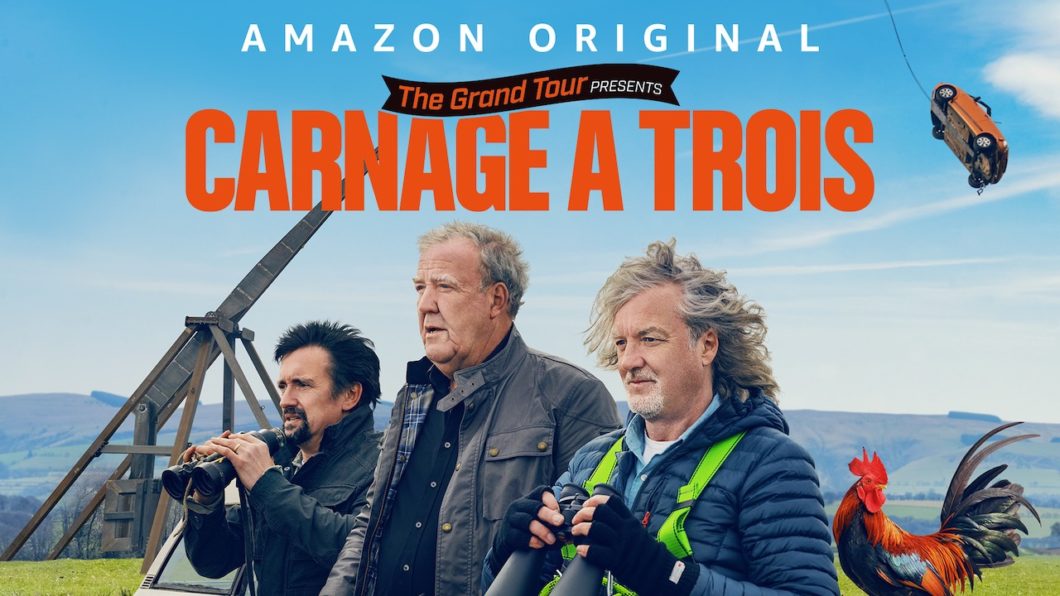 The Grand Tour Presents: Carnage A Troi, the latest special from the dynamic trio that is Jeremy Clarkson, Richard Hammond and James May, is arriving just in time to cheer us all up for Christmas. Landing on Amazon Prime on the 17th December, the new film sees them tackle a topic that has always been knocking on the door… and that is this… what is it with the French and their cars? Take to the Road sat down with the The Grand Tours executive produce Andy Wilman and star Richard Hammond to chat about the new Gallic flavoured adventure.

So Andy… The Grand Tour Presents: Carnage A Trois… as a title for the latest special, it pretty much does what it says on the tin. Tackling “The French’ with some cool cars and making the special fun in a sort of Monty Python-esque in a way.

Mr Wilman – I’m actually expecting this one to be a bit marmite. The French thread was very focused and I just hope it comes across as a love letter to the French, to what they do and their attitudes and their culture. Because we are jealous of it! So I hope people get that and don’t think its  a Nigel Farage fest. You see we four are staunch believers in this Anglo-French relationship, we are brothers for ever, even if we want to beat each other up at times. And when it comes to cars and motoring attitudes, we bow down to them. So I hope the show is a bit of a romp, its a bit Clive James in terms of we are looking at the culture of our neighbours. Plus its a fast film and is shorter than any other special we have done, because there’s no road trip so there’s less waffle from the guys. So I hope people see that it is more light hearted and less dramatic than say the Vietnam special.

Seeing Hammond drive the Leyat Helica was hilarious wasn’t it? The pilot flying the plane with no wings.

Mr Wilman – May has already got that job! Ha ha!

Richard, seeing the super rare and obscure Leyat Helica in the special was very cool. It is quite scary isn’t it in a mad scientist kind of way and it must have made your Matra Murena seem almost like a normal car!

Hammond – It is very scary and yes it did actually. The fact that the Leyat was clearly brought out with expectations that it would sell, it was extraordinary! It was one of those “Yup that’s what the worlds needs!” inventions… basically a gigantic death trap!

Given the Leyat Helica looks basically like an airplane with no wings, had you ever dreamt of being a pilot? But one that never got to take off the ground?

Hammond – Ha ha yes well actually I do fly helicopters, but I can’t fly fixed wing so yes, it not having any wings means its less likely to get airborne and then having to deal with the problem of landing it.

Andy, the cars in this special are actually quite special.

Mr Wilman – The Citroen SM… oh my God! So so beautiful! And the best thing you can do is stand and admire it as it must have broken down on us 2/3 times during filming! So yes stand and admire is the best position to be in really. I’ve never driven one and it will probably remain that way to be honest because very few people have managed it. So yeah when it does breakdown you can just look at it. I know Hammond is going to buy one… he is such a moron… he’ll buy one because its like another lost dog that needs rescuing and taking home. He was actually saying he was going to get one and convert it to electric which is actually one of his brighter ideas. You’d have that body, get rid of all that wiring and the Maserati engine out of it and then you just waft around in it all day. So lets see if he actually does it! But Jeremy and Richard were on form when they were filming that day with the SM. And that sequence is why I think they have such a big following. I don’t think any other pair could make a comment or evoke a feeling towards a car better than the way they did. With the SM, others can see why it is emotional.

Richard what was the greatest feature of the Matra Murena you drove? Apart from the steering wheel which you mention in the special is fantastic.

Hammond – It was a most excellent steering wheel as well! I think the 3 seat arrangement was quite fun. It is clearly a 2 seater car but then managed to fit 3 and it was very light. Typically French really… simple, light and surprisingly rugged actually. And it wasn’t ostentatious which are the qualities the French like about their cars. They want unpretentious cars basically.

And what was the most irritating thing about the car? The most French quirk that bugged you the most?

Hammond – The gear shift! Which was not a precision implement!

The French have demonstrated many times in the past that they can build truly exceptional cars. But then they create ones that are just dull and uninspiring. Do you think that is linked to what you discuss in the special? In that they don’t care and they just want “a car”.

Hammond – I’ve always loved how it is two extremes with the French, they can build something breathtaking like the Citroen SM we have the in the film, or something that is just a practical and utilitarian piece of kit that you buy with as much excitement as when you buy a new microwave or dishwasher. But the French have also been good at making cars that are not too pretty but are somehow rugged. Sure in the first year something drops off but what you are left with is a car to get around in, which is what they are after. Which hopefully is what comes through in this film! I actually worked at Renault in the press office when the new Scenic came out and it was a huge success for them. And if you aren’t bothered about washing it or getting the odd dent in it and if you are going to keep it throughout its entire natural working life, then fine… get on with it!

What I enjoyed the most about the special was how it shows that cars can really encapsulate a nations culture and get to the very heart of what makes them tick. You look at a French car and immediately make assumptions.

Mr Wilman – And more than any other nation! We all know Italian is supercars, American is muscle cars, the British is sports cars. But nothing is a starkly laid out or as strongly linked as French character, French car culture and French car design. It is the strongest and the most obvious of all those national identity links. I couldn’t agree more with you.

And following on from that on the flip side it is fascinating how the French can then make some truly dull cars like the ones you used in the challenges. The perfect A-B transport for people who really don’t care what they drive, as long as it gets them there without breaking down.

Mr Wilman – I agree with you because you’ve got this weird dichotomy where the French will give you the SM or a 2CV, both of which were the height of engineering thought. And then they are also catering to the masses, the French people who as you say just buy a car and run it into the ground and get another one. And I would thrown in that the French wouldn’t even consider a British car because they would have to think about it and they have more important things to do like have lunch. And for car nerds like us, watching those people who keeps cars for ever until they break, its fascinating with lots of interesting things going on. Its a massive tribute to the car and we love seeing that bond with something that is to them quite utilitarian.

Watch the trailer for The Grand Tour Presents: Carnage A Troi

Andy Wilman and Richard Hammond were talking to Niall Julian