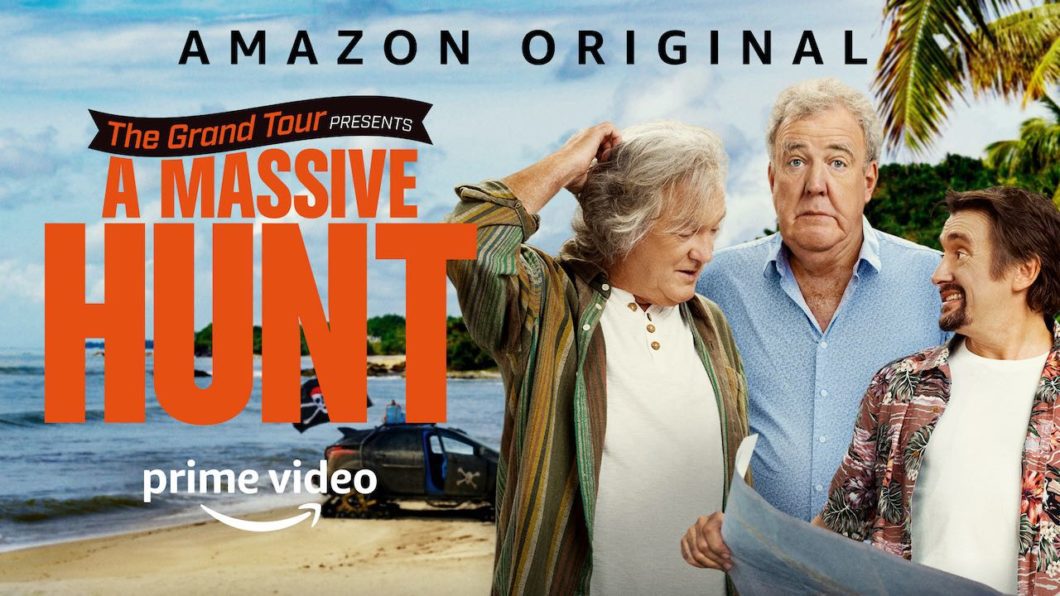 Continuing on their second adventure in a series of feature length specials, The Grand Tour trio Jeremy Clarkson, Richard Hammond and James May are back on four wheels in an epic return to cars hunting for treasure in a Madagascan adventure!

And now for the Exclusive Interview with Hammond, Clarkson and May…

Richard how did it feel to be back on the road again with your best mates?

Hammond – It always feels great. Because we are now doing these feature length specials, there’s bigger gaps between the trips so that highlights even more that first moment when we get back together. Its exciting! We don’t take this stuff for granted. You know we’ve been looking forward to it for months and when we first get going, that is a real moment! And its also when we realise, this is actually what we do! You know when you talk about people who’ve been together for ages finishing each others sentences, that’s what we do all the time. Which I think helps keep it feeling natural and real. So when we meet up, its not just us three, its the crew around us as well. They are always ready to leap out and capture things as they happen, especially when we break things. Which can happen… a lot!

The Ford Focus you drove in Madagascar performed really well. Were you surprised at how well it did drove and were you tempted to use the launch control to get through the mud and terrible roads?

Hammond – Yes well the launch control was of no help! The car though… I was staggered by how it handled everything. I think when you are taking any vehicle in the context of our shows and you are determined to get it to the end at all costs, it is astonishing the punishment they can take. I know that little Ford had a hard time because I was in it! It never ceases to amaze me what an apparent ordinary road car will take. And you know its part of the escapism of the show, getting to do this stuff in these types of cars that you wouldn’t do in real life. And don’t be under any illusion either, because we don’t either. You know I can’t go and live The Grand Tour live for the rest of the year because I’d be broken. Ha ha! So its a real privilege to be able to get out there and share the passion for cars and have a bit of escapism as well.

At what stage of the Madagascar expedition did you wish your Galleon present from Vietnam had survived?

Hammond – Ha ha yeah well it could have been useful! Honestly I don’t know what vehicle would be best suited to the road we took in Madagascar. But watching the locals drive there, you know they’ve grown up learning how to use these roads… they’d give the best off roaders and rally drivers in the world a run for their  money!

Jeremy were you surprised at how the Bentley Continental V8 performed on the rough roads? Given its a big luxury barge full of tech. It seemed to drive like a good old fashioned Nissan Patrol 4×4.

Clarkson – I mean I would just say what were Bentley doing making the Bentayga?! It was extraordinary! I know it used brute force to smash its way through things rather than over them. It had a very armour plated underside. The normal car would never have do it. Let me put it this way… apart from the Alfa GTV6 I brought back from Scotland, it’s the only car that was so special that I brought back to live with me. I just completely fell in love with it! It is just a fabulous piece of engineering. Absolutely fabulous!

James at what stage of the trip did you wish you had kept the hood on the Caterham? Given the amount of mud you were showered in.

May – Well yes there were a couple of occasions going through the mud, and by saying mud we’re actually being polite as there was definitely other things mixed in it… but the hood would have saved me a bit. But with the state of the roads and some of the puddles that looked small but were 10 ft deep, I kind of wanted to make sure I could get out of the car quickly. So as a trade off being out in the blazing sunshine etc, the escape capabilities were important. I did feel perfectly safe but you never know do you. Its a bit like riding your bike and you see a puddle and think “Oooh I’ll ride through that one”… what if its 20ft deep??!!

Watching you get showered in mud did make me wince and think that you probably would have preferred to have been at home in your new pub with a nice pint of ale and a crossword.

May – Ha ha yeah well at one point it did get pretty trying I have to say. Especially at the end of the day when I had to listen to the other 2 moan about how they had got a bit sweaty or their shoes were a bit damp or something. But it was a great adventure and I was so pleased with how my plucky little Caterham worked. I felt completely vindicated and it was worth it. I know if I get showered in muck or something the viewers love it and its our job to entertain them so you know… hopefully that’s what I did! Anyway it all showered off after a couple of months!

Hammond, Clarkson and May were talking to Niall Julian