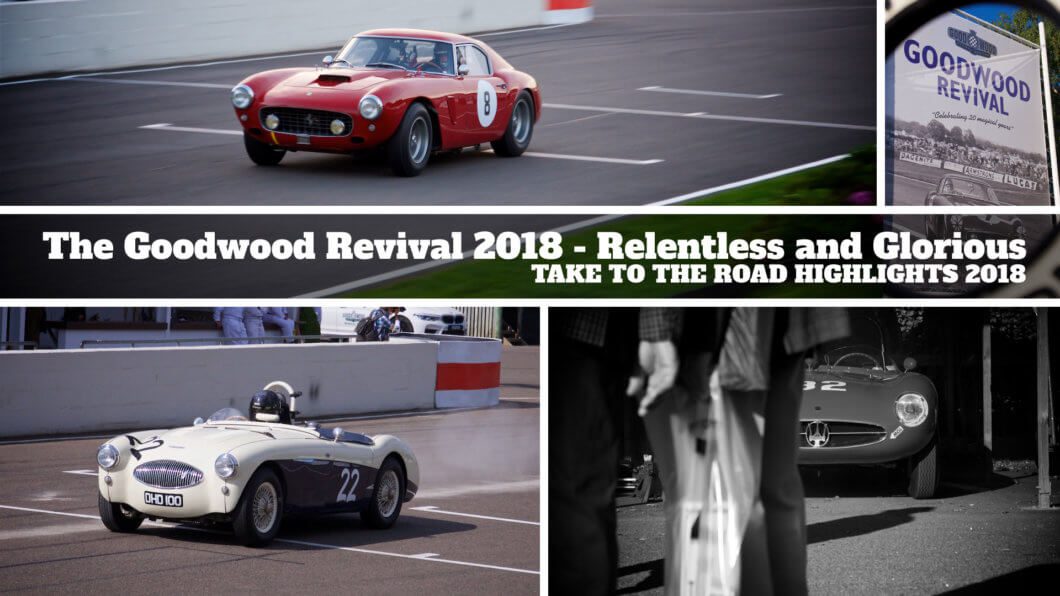 They say there is a first time for everything. It is a saying in the classic car world that carries a lot of meaning. For many of us petrolheads there is a long list of firsts. For me one of them was attending the Goodwood Revival. So when I was offered a ticket to attend the opening day of the Goodwood Revival 2018 weekend, I grabbed it with both hands.

Even though I hadn’t been before, I knew what to expect when I arrived in Chichester. First of all there was the site traffic which was queuing up well before 7am. Then there was the crowds, all of whom appeared to have just walked off the set of a vintage movie. It was just a tiny slice of the fevered excitement that hit me as soon as I walked through the gates of Goodwood.

While the Goodwood Revival is as much about the historic race cars, it is also a sense of occasion, harking back to a by gone era. The crowds that milled around the entrance were clothed in a fabulous array of vintage apparel. And a large locomotive billowing clouds of steam really made you feel like you had stepped back in time.

This all made for a splendid backdrop but the real focus of the mission were the cars. With luck my Goodwood Revival 2018 ticket also came with access to the Paddock. This really was the Golden Ticket, the holy grail so to speak as it meant I was able to get to the very heart of the event.

Row upon row of historic race cars lined the paddock shelters, mechanics working feverishly to get some of the worlds most expensive classic cars ready for racing. It was a hive of activity with the sound of roaring engines being test fired and warmed up, mixed in with a growing atmospheric buzz.

As the cars made their way to the track I took up position as close as possible. The beauty of the Goodwood Revival is the fact you get right up to the action. So close your ears take a hammering from the massive decibels these fierce machines produce.

Watching the Revival on tv or via a live web stream really doesn’t prepare you for the level of noise. It was loud and then some. And it was glorious!

It really is a wonderful feeling watching extremely rare, historic race cars roar past. It takes you back to the glory days of racing, when these machines were at their prime. Seeing them raced hard and fast shows that their prime is still very much in the now. It keeps the spirit of historic racing alive.

Some of these cars might be worth upwards of £30m each (which is conservative for some!), but they were all driven the way they were intended to be. Race cars have one task and that is to drive as fast as possible. It just so happens that all of them are breathtaking to watch. Breathtaking combined with a visceral assault on the senses.

The only problem I had was trying to be in two places at once. With so much to see from racing to the wide ranging paddocks, there is a huge amount to take in. I think next year will require a minimum two day visit. Just to make sure one can drink in as much of the atmosphere as possible.

When the final race brought the days action to a close, I left the track absolutely broken but smiling. I had survived Goodwood Revival 2018. The atmosphere, the energy, the excitement and the cars had sustained me on what was a day of relentless action. It really was glorious!