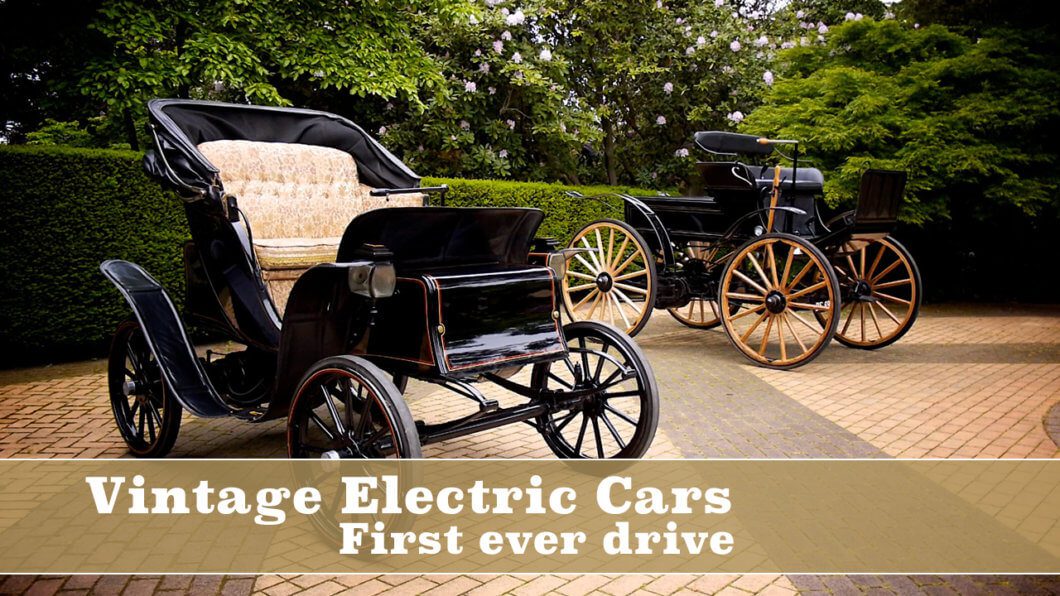 The automotive industry is currently going through its biggest evolution since the dawn on the motorcar in the late 19th century. I am of course talking about the rise of the electric car. With concerns growing over the environment and the use of fossil fuels, the car industry has realised that the future (for now), apparently lies with the electric car. Pretty much every major manufacturer is rushing to sell their own electric vehicle, attempting to gain a slice of a new and emerging market. So the public could be forgiven for thinking that the early part of the 21st century witnessed the birth of the electric car. And that doesn’t even take into account the infamous General Motors EV1 (launched in 1996) which impressed on its debut. But it was then cancelled under very controversial circumstances. It may therefore come as a bit of a surprise to many that the concept of an electric car is not at all new. And there are even vintage electric cars!

So it may come as a bit of a surprise to some but the vintage electric car was actually there at the emergence of the automobile industry. It is a fact that raises many questions, most prominent of which is “why did they not succeed?”

When I got the invitation from Historics at Brooklands Auctioneers to film two very rare vintage electric cars, I was not really sure what to expect. I’d never come across one before. Though I have seen plenty of vintage cars from the period and even filmed a few (see our review of the Regent Street Motor Show 2014 and 2015, our London to Brighton Veteran Car Run film and our Citroen 5CV film). Needless to say I was excited about getting the chance to drive both of these fascinating vehicles. And both of the vintage electric cars turned out to be surprisingly good cars to drive.

First up was the 1907 Victor High Wheel Runabout. On first impressions it looked just like any other horse drawn carriage that we’ve all seen in TV westerns. It had large wooden spoke wheels, the bench seat was very high up. There was even a large brake lever on the side, like the ones in the wild west movies.

The Victor High Wheel Runabout is quite unique in that it is the only known example ever built. The car was mentioned in the Standard Catalogue of American Cars 1805-1942 as being registered to a S.H. Bunshaw of Lincoln, Nebraska. However no further documentation has been found. So its history is unknown. It is believed to have been a prototype, which goes some way to explain why a traditional carriage was used as the test platform for the electric motor and drive train.

The Victor is powered by a DC motor which originally would have been powered by period lead acid batteries. Owner Bryan has upgraded the system to six Odyssey PC2250 high capacity traction batteries (all charged through a Vivian high capacity charging system). These provide a combined 70 volts and give the Victor a range of 65-75 miles on one full charge. Which isn’t bad for a vehicle from 1907.

What surprised me the most about the Victor, apart from the relative silence as we drove along, was how quick it was. Even with the weight of the carriage, the batteries and myself and Bryan as occupants, it had a surprising amount of power. This meant the car could attack hills at speed and could maintain its climb at an impressive rate. And even more surprising was the fact that on the down hill, the cars motor recovered some energy, effectively charging the batteries every time it descended. Bryan reckoned this only amounted to a few amps. But over a long, hilly journey, it certainly would help replenish the batteries a little. Who would have thought an energy recovery system would have existed on a car in 1907? Incredible!

The Victor continued to impress on the technology front with its differential, which helped take care of traction on the go. And while the suspension was a little firm, using just two elliptical springs, the designers did add torsion bars on the sides to aid the drive and gearing system. Clearly a lot of thought went into the design of the vehicle, despite its old fashioned appearance.

Another clever feature was the centre mounted tiller steering bar which allowed the driver to swap the controls to the passenger. So the car could be left hand drive or right hand drive, depending on the drivers mood or country of operation. The steering did take some getting used too, but it was pretty easy to control once I got used to it. The large wheels did require a bit of effort to turn up front and due to the size of the Victor, its turning circle wasn’t brilliant. But the motors controls and excellent braking meant it was very easy to manage, making the whole car very easy to drive indeed. Even though it was a vintage electric car, it was an impressive vehicle with interesting, modern touches.

Next up was the 1906 Pope Waverley Victoria Phaeton. Again this vintage electric car had a very traditional appearance and could easily have been mistaken for a horse drawn carriage. Though its small wheels and more compact appearance would have hinted at its automobile identity.

Like the Victor, the Waverley is fitted an DC motor with power supplied by the same six batteries as installed in the Victor, giving it a range of roughly 50 miles. The Waverley however doesn’t have the ability to recover energy on the down hill, perhaps reflecting the advancement in technology between it and the Victor. However its main advantages over the Victor were its compact size, retractable hood, front weather proofing for the occupants and electric lights. The Victor didn’t have any electric lights at all which meant it couldn’t be driven at night. The Waverley wins then on the practicality front.

The Waverley drove very similar to the Victor except its tiller steering was fixed to the left side of the car, making it a let hand drive car. This meant you controlled the tiller lever with your right hand, and worked the speed regulator lever with your left. Like the Victor it had a forward and reverse gear with the addition of neutral in the middle. Unlike the Victor, it’s braking system couldn’t be controlled by pulling back on the regulator. Instead two brake pedals helped slow the car down. These required a good shove to operate, especially when going down hill, but they did work.

Despite its lack of power on the hills, the Waverley performed very well on the flat and felt very swift indeed. The steering was easier to operate thanks to the smaller wheels and the turning circle was superb. And thanks to its compact size and slightly slower top speed, it felt more controllable. The lower seating position certainly helped there. It was also very comfortable as we were essentially sitting on a very fancy sofa attached to four wheels and an electric motor. It was brilliant fun.

What struck me the most after spending the day with these very rare vintage electric cars, was how easy they were to drive. I had assumed because they were old vintage cars, that they might be a lot more difficult to handle. But I couldn’t have been more wrong. The Victor and the Waverley are probably the easiest vehicles I have driven (and the oldest as well). And given the difficult reputation petrol cars earned form the same period (the Model T Ford was very hard to drive for example), it does make you wonder why these electric cars didn’t catch on. Mechanically both vehicles are very simple, requiring very little maintenance. There’s no clutch to have to learn how to use, or no gearbox to fight with. And there’s no wrist breaking crank handle to dice with either. Also the fact that both these vehicles could be trickle charged at home using a domestic power supply in the 1900s, draws fascinating parallels with contemporary plug in electric cars. It has almost come full circle.

So why didn’t cars like the Victor or the Waverley catch on at the turn of the 20th century? Perhaps it was easy access to cheap fuel that lead to the rise of the petroleum based car, coupled with the resulting rising power of the petroleum companies. Another thing to consider is access to electricity. It was not widespread in turn of the 20th century America. Only those well off enough could afford to have it, immediately limiting demand for electric cars with the wider population. It really is a great shame they didn’t take off, especially given their ease of use… anybody could have driven one.

Whatever the reason, the electric car eventually vanished and the same fate also befell the steam car (see our film with Bryan’s Stanley Model K steamer here). Leaving petrol the winner and it has dominated ever since. But as we all know that domination is starting to wain. We are now living in the era of the rebirth of the electric motorcar. It is therefore fascinating knowing that legacy of the Victor and the Waverley lives on, making both these cars a very interesting piece of early motoring history. They really are the forgotten vintage electric cars.

Both the Victor and the Waverley are coming up for sale at Historics auction at Brooklands on Sunday 11th June. Both vehicles carry an estimate of £30,000 – £40,000. This presents a seldom repeated opportunity to acquire two exceptionally rare vintage electric cars.

More details on the Victor can be found here on Historics website.

And more details on the Waverley can be found here on Historics website.