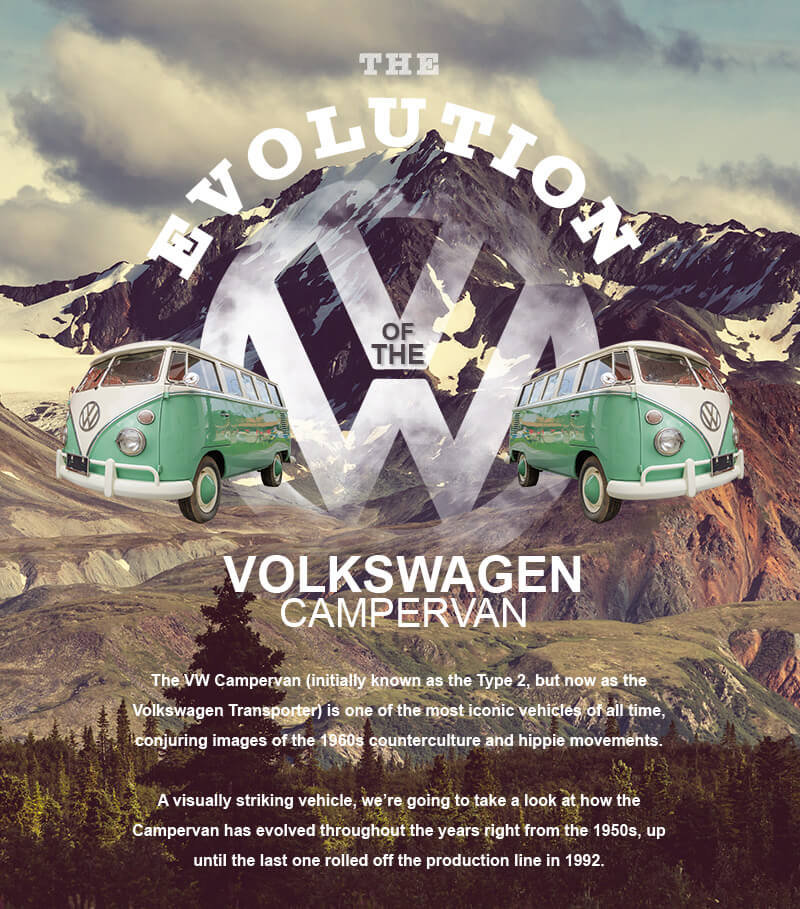 The VW Campervan is one of the most iconic vehicles of all time, conjuring images of the 1960s counterculture and hippie movements. Used by people around the world, from surfing trips to wedding cars, this timeless vehicle is one that still prevails today and looks to do so in the future…

Recently Volkswagen revealed their 2022 concept, the I.D Buzz, an electric, autonomous Campervan that echoes to the past and the future. With this exciting news, VW Motor Parts have decided to look back at the classic camper from it’s production in 1950 to the proposed 2022 concept.

Known as the ‘Splittie’ due to its split windscreen, the original VW Campervan was known for its rear mounted engine. And for its two-tone paint job and huge aluminium VW logo on the front.

Over 90 variations such as buses, pick-up trucks, ambulances, ice cream vans and more were developed during this time too.

Launched in 1967, the second generation VW Campervan (known as the ‘Early Bay’) was launched. It lost the distinctive split windshield, but added wind-down windows. Plus it took on a slightly different shape which gave it the nickname ‘the Breadloaf’.

A later version of the T2 (known as the ‘Late Bay’) introduced new squared bumpers, moved the front indicators up beside the grill and gave the option of a more powerful Volkswagen Type 4 engine.

Known as the T25 here in the UK, the third generation was bigger and heavier than its predecessor, with a much boxier and less rounded style.

It was one of the last Volkswagens to use an air-cooled engine before new water-cooled 1.6 L diesel and 1.9 L petrol options were available in 1981.

The nineties saw a significant shift in the production of the Transporter. The engine was moved to the front and front-wheel drive was adopted. The vehicle also took on a more traditional appearance.

Noted for its versatility and European sophistication and style, the T4 was marketed as the ‘Eurovan’ in the US.

The T5 was the first Transporter that came as a fully kitted out campervan (known as the Volkswagen California), complete with beds, sink and fold-up seat and tables.

The latest version of the Transporter was released in 2015. While on the face of it, it’s probably the version with the least notable upgrades from its predecessor. But Volkswagen claim there are no less than 6,000 changes!

The majority of these are under the hood. Things such as the engine, suspension and technology were upgraded. And the fact remains that this is the most complete VW campervan on the market!

While it’s not part of the Transporter range, VW plan to bring the iconic Campervan back with an all new electric model, the I.D Buzz. Its due to arrive in 2022.

Visually, it’s the closest we’ve seen to the original T1. But unfortunately, it won’t feature the famous split screen windshield. In the meantime, there are models like the VW Amarok that mimic the feel when venturing off-road. And as there are more than 20 trailblazers leading the way in VW Amarok lease options, this can keep us occupied until 2022.

See how far the Volkswagen Polo has come in 43 years