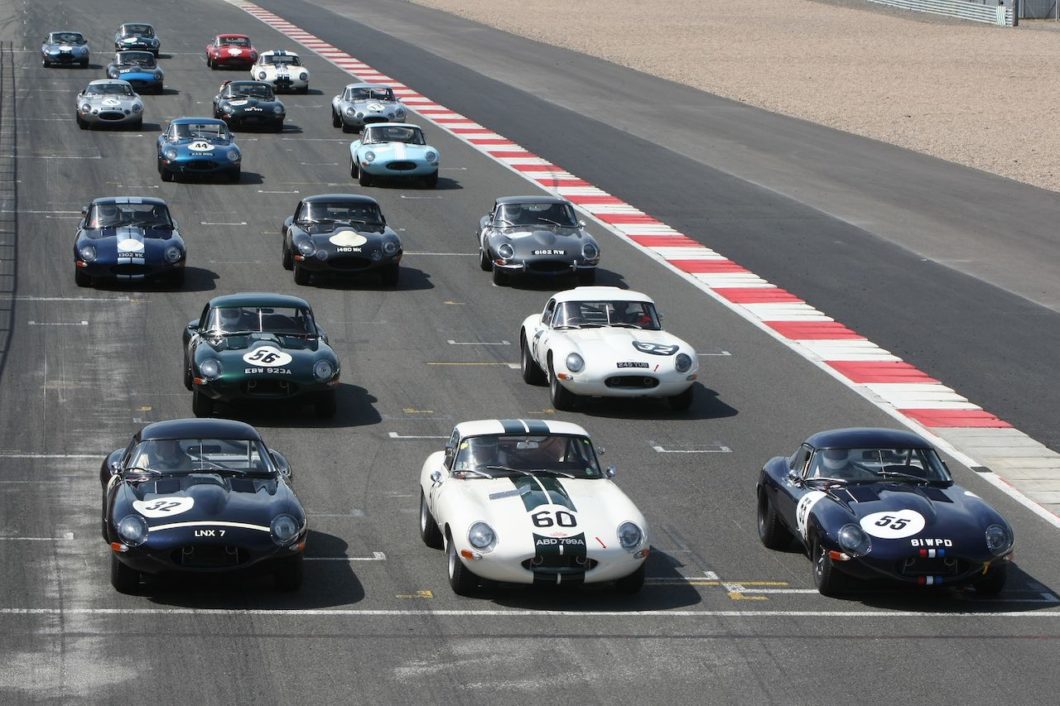 A decade on from celebrating the Jaguar E-Type’s milestone 50th anniversary in record-breaking style at Silverstone, The Classic 2021 will now be saluting the much-loved sportscar’s  60th birthday next summer (30 July – 1 August).

Back in 2011, the special revelries memorably included dedicated races and glittering displays plus an incredible track parade with E-types travelling from all around the globe to join what was an amazing party. The turnout packed the entire 3.7-mile Grand Prix circuit and set a new Guinness World Record for the largest-ever parade of Jaguar cars.

A whole host of celebrations are now being planned for the 60th anniversary, crowned by another unmissable race reserved exclusively for competition versions of the E-type – a show-stopper lauded on its launch in 1961 as ‘the most beautiful car in the world’ by none other than Enzo Ferrari.

Fittingly, the spectacular one-off showdown will be titled the ‘60th Anniversary E-Type Challenge’ and will run to a 45-minute format with a mandatory mid-race pit-stop to allow driver change-overs. Such will be the new race’s prestige, that a full-capacity 58 car grid of racing E-types is expected, topping the record 52 car entry assembled in 2011.

“We already have some amazing plans for The Classic’s own postponed 30th birthday party in 2021 and this unique ‘60th Anniversary E-Type Challenge’ adds to the anticipation,” enthused Nick Wigley, CEO of The Classic’s promoter Goose Live Events. “It will be not only a fitting celebration for one of the most idolised cars of all time but also yet another highlight on the unrivaled line-up of retro races at the world’s biggest classic motor racing festival.”

As one of the major attractions at The Classic 2021, the ‘60th Anniversary E-Type Challenge’ will take place on Saturday afternoon as part of the packed 12-hour race programme with qualifying for prized grid positions taking place on the Friday.

The stand-alone showcase is being organised by Motor Racing Legends, the historic motor racing specialist which boasts strong links with Jaguar having recently been appointed by the factory to run its popular Jaguar Classic Challenge in 2021.

“The Jaguar E-type is a true icon of 1960s motor sport history and there can be no better way to celebrate this major anniversary than with a dedicated race at the UK’s premier historic motorsport event,” Wiltshire said. “Motor Racing Legends has recently taken over responsibility for the Jaguar Classic Challenge and we are so pleased to be able to announce this special race for Jaguar E-types at such an important time”.

Other grids at the Classic masterminded by Motor Racing Legends include the combined Royal Automotive Club Woodcote and Stirling Moss Trophy for sports racing cars from the fifties and sixties, the Historic Touring Car Challenge plus the prestigious Royal Automobile Club Tourist Trophy for Historic Cars (pre-63 GT) – another of the festival favourites which also features early racing E-types as well as a host of magical Aston Martins, Austin Healeys, Ferraris, Lotuses and Porsches from yesteryear.

As originally planned for The Classic’s postponed 30th birthday party, the racecard at next summer’s eagerly-anticipated event will be a ‘Greatest Hits’ compilation starring crowd-pleasers from the past with the inclusion of this special E-type anniversary grid an added bonus to what was already an outstanding line-up.

Tickets for The Classic next year are already on sale and, for a limited time, purchasers have the chance to buy at last year’s Early Bird prices. Adult admission starts from £39 with the price of full three-day weekend tickets frozen at £105. Free admission is offered to accompanied children aged 10 and under while day tickets for those aged between 11 and 15 are priced from just £6. Car Club Display packages are also available as well as a special 30th Anniversary Celebration Package. Show-goers can book with confidence, too, as full refunds or ticket rollovers to the following year are guaranteed should UK government guidelines prevent spectator access.

All tickets will give access to both racing paddocks, open trackside grandstand seating and much of the fabulous family entertainment on offer. Full details of tickets for The Classic 2021 at Silverstone can be found at: www.silverstoneclassic.com.