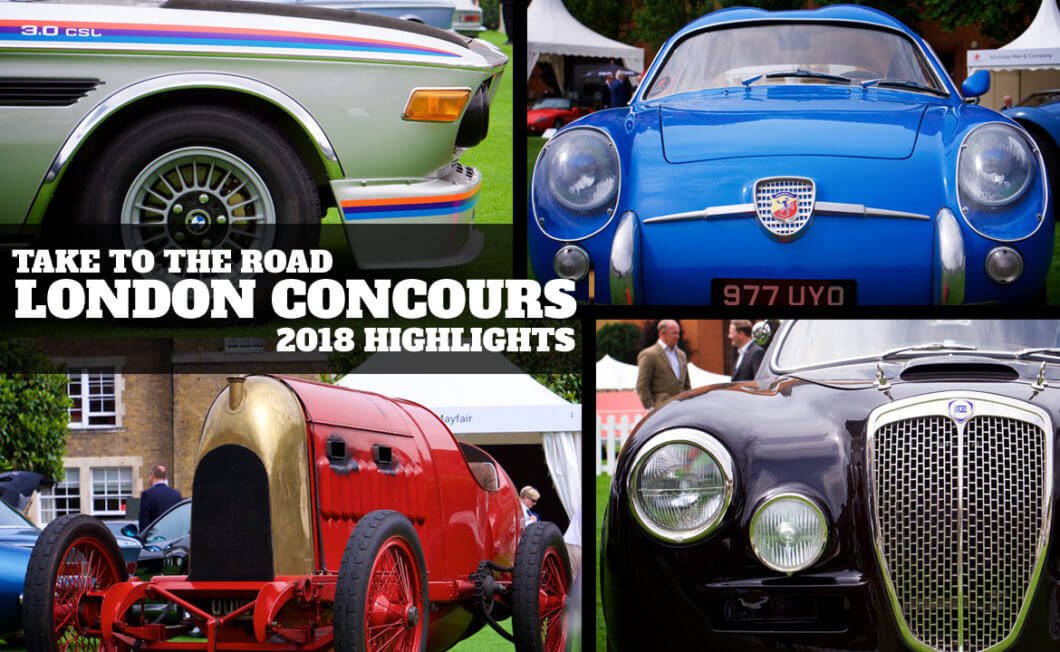 The London Concours once again graced the lawns of the Honorable Artillery Company in the heart of the capital. This years event took place over two days and provided a wonderful taster for the upcoming Concours of Elegance at Hampton Court Palace in September. Even though the London Concours is only in its second year (see last years highlights here), the quality of the cars on the display was exceptional. And Take to the Road was there to get a closer look at some of the rarest and most expensive classic cars in the country.

The setting for the event really is second to none. The lawns of the Honorable Artillery Company is a wonderful setting for an event, the well maintained grass setting off the cars against the towering city scape that surround the grounds. Approximately 180 cars were on display this year, an increase on last years numbers. As always with an event like this it is very hard to choose a favourite, such was the quality on display. Below is a selection of the cars that caught my eye on the day.

One of the cars that immediately caught my eye on arrival was the very hard to miss Beast of Turin. This was my first time to see the famous 1911 Fiat S76 and it was pretty exciting to finally get the chance to get up close and see the car in more detail. Although on this occasion the colossal 28.5 litre engine was silent, the sheer size of it was mesmerising.

Originally built by Fiat to break the world land speed record, the aptly names Beast of Turin produces 300BHP, an eye watering number for its era. It really is a marvel of early 20th century automotive engineering. I expect if it had fired up its massive engine, it would have shook every single window around the grounds.

Another eye catcher at the show was this stunning AC 428 Fastback. This is one of my favourite GT cars and combines the best of British, Italian and American engineering. Built by AC Cars at Thames Ditton in West London, the striking Fastback was styled by Frua, with power supplied by a Ford big block V8.

Also known as the AC Frua, only 54 were built making it a very rare and fascinating car. For me this is a sublime GT, combining exquisite Italian styling with a British built chassis and American V8 muscle.

Continuing with the Ford V8 theme, another stunner at the London Concours was this exceptional De Tomaso Mangusta. For me this is the most beautiful car ever built by Argentine industrialist Alejandro de Tomaso. He employed Italian design house Ghia and the master Giorgetto Giugiaro to pen the shape of the ultimate supercar.

Powered by a powerful Ford 5.0 V8, the Mangusta was noted for its unique ladybird like hinged engine covers. And it was also noted for being a bit of a handful to drive. While it may not have had the best chassis, the De Tomaso Mangusta is a significant classic supercar.

Another spot at the show was this delightful 1952 Jowett R1 Jupiter. This car raced at the 1952 Le Mans and won its 1.5 Litre Class with drivers Marcel Bequart and Gordon Wilkins. The win was Jowett’s third in a row at Le Mans, which demonstrated how effective the Yorkshire based firms Works team was.

When you imagine an old Le Mans racer this is exactly what come to mind. It is a fascinating car with fantastic period race history.

Following on from the charming blue Jowett there was another exciting spot. And this was a fantastic blue Fiat Abarth 750GT Double Bubble Zagato. This car is right up there in my list of top Fiat’s of all time. It is the combination of its cute and fun appearance, combined with a speed and handling that I find so appealing. The Double Bubble was built to race and it proved very successful with a 1-2-3 finish in the sub-750cc class at the 1957 Mille Miglia.

It is a superb example of Fiat and Abarth’s small engine focused race car designs of the period. And combined with its gorgeous Zagato styled curves, it just has bags and bags of quirky character. It punches well above it weight. Very successfully!

Other cars of significance at the 2018 London Concours