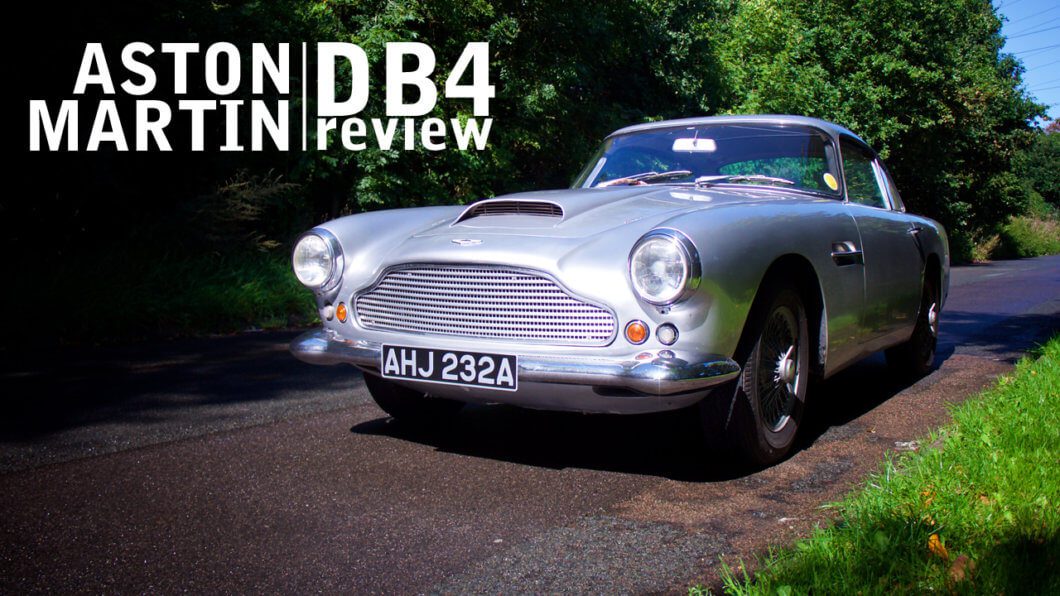 Of all the British automotive brands that have come and gone, there is one that is guaranteed to stir the emotions. And that is Aston Martin. It is a name that evokes style, luxury and speed. And of course a certain fictional spy. The Aston Martin DB4 was never a Bond car but its design laid the foundations for the legendary DB5. It is an image that I found I couldn’t shake (no Bond pun intended) as I drove the DB4. This made it all the more special.

Getting the chance to drive an Aston Martin is always a special moment and when that car happens to be an Aston Martin DB4, then you know you are in for a treat. The lines of the DB4 are classic GT touring car. Developed to replace the DB Mark III, the DB4 was launched in 1958 and was designed by Carrozzeria Touring of Milan.

The Milanese coachbuilders employed their famous lightweight superleggera tubular frame and alloy body, which allowed the DB4 to wear the distinctive Superleggera badge. The new DB4 was an instant hit combining European looks with British engineering.

The car I got to drive was an interesting take on the classic GT. It was no longer a matching numbers car, a fact that might put some collectors off. It is always a pity when an original engine is no longer with a car. But for this Aston Martin DB4, the non original engine is its appeal. According to the history file the car was purchased in 1988 in need of restoration. Works were carried out in 1989 and the engine was rebuilt in 1992. Then in 2000 the biggest change took place, which involved removing the original 3.7ltr straight six engine.

In its place was installed a bored out 4.2ltr DBS Vantage block along with triple SU carbs. The exact BHP figure for the upgrade isn’t known but in period guise, the 3.7ltr engine produced around 240BHP. With the triple carb setup and the over bore to 4.2ltr, this DB4 could be producing anything close to 290BHP (a rolling road test would determine the true figure of course). And it sure felt like it had all that extra grunt.

Aston Martin’s DOHC engines have always produced a very distinctive exhaust note. The noise from this DB4 was nothing short of epic at full chat, the addition of a stainless steal exhaust adding to the wonderful sound. The engine was very lively and under acceleration it pulled like a train. And the four speed gearbox was a joy to use.

I have heard (as one does on the automotive grapevine) that Aston’s can suffer from agricultural gearboxes, a slant in the direction of former owner David Brown’s tractor business no doubt. But the original factory four speed in this DB4 was ideally suited to the 4.2ltr unit. The ratios were close allowing for quick changes, enhancing the cars sporting feel. There was the classic 1950s era drive train whir but this simply added to the experience and was quickly drowned out by the roar of the Vantage block. It was a sound I found very addictive!

While zooming along in the GT, I was impressed with the clutch. It was firm but with a nice bite point and the brakes were up to the task of reigning in the car. The steering was a bit heavy and I can imagine parking in central London would work up a bit of a sweat. But on the open road and in the bends it felt good for a 1950s car. Plus the Mota Lita wheel was nice to look at, which is always a major plus.

What appealed to me most about this DB4 was the fact it was a driver. It was by no means perfect and had some bubbles and blemishes on the paint. The rear bumper was taken off the car (as it was rusty) but the de-bumpered look actually suits the rear of the BD4. Other details like the chrome beading around the windscreen and the paint on the wire wheels was starting to lift and peal. On the inside the interior was in good order, the dark red leather contrasting nicely with the silver exterior. There were some signs of wear here and there but nothing that detracted from the comfortable interior. It was a nice place to sit.

So all in all this 1959 Aston Martin DB4 was a solid driver. A stylish classic that you could use daily and not have to worry about its exterior. This car is far from pristine and is not a concours show car. Instead it is a DB4 that could be used and improved over time. It felt very honest and the upgraded engine made it a pleasure to drive. And while the Aston Martin DB4 was never used by James Bond on the big screen, there is nothing wrong with pretending you are James Bond as you blast along, the straight six playing its tune. It is a drive I will not be forgetting in a hurry!