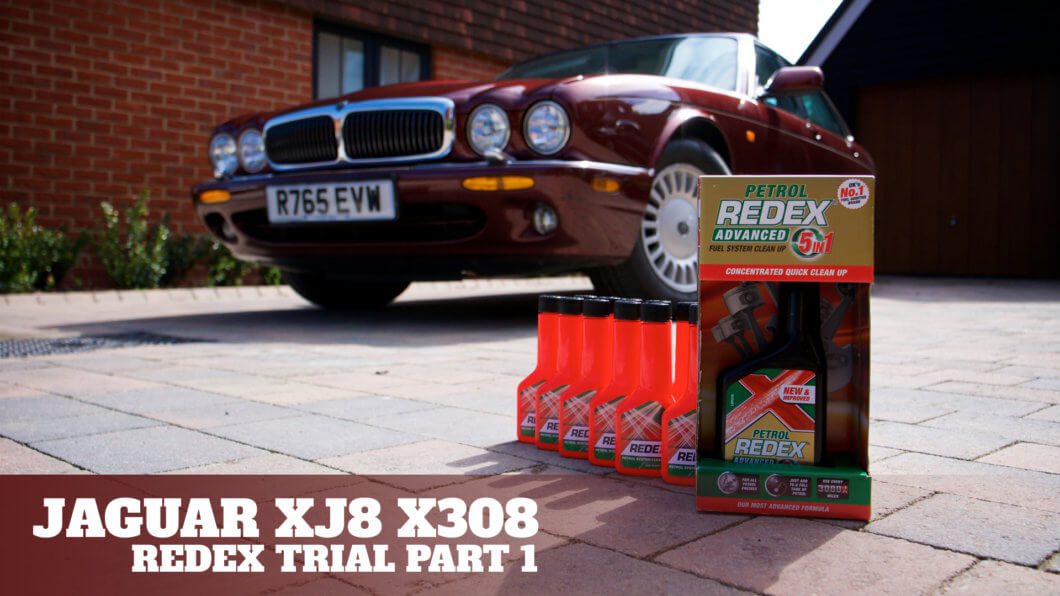 I am very pleased to announce that Take to the Road has been asked to take part in a trial with Redex. The purpose of this project is to test some of the companies products over a three month period and report back on how it performs. When I thought about which car to use for the trial I settled on my recently acquired 1998 Jaguar XJ8.

It was an obvious choice really. When I was doing my research on the Jaguar X308, one of the negatives found in most reviews were the running costs. And that was specifically around the cars MPG figures. Basically the Jaguar XJ8 likes to use fuel. The baby 3.2ltr V8 that resides in my XJ8 is actually frugal when compared to the larger 4.0ltr V8 and the range topping Supercharged XJR. But that still means averaging roughly 26MPG on a motorway run. Which you could argue isn’t too bad for a big saloon like the XJ8. The V8s thirst for fuel really hits home though when it is stuck in traffic. Around town I’ve seen the figures drop to 18MPG! Now that is low! And that observation is based on owning the car for what has been a relatively short period of time.

Looking back to when I owned my old Jaguar XJ40, I remember the 3.6ltr straight six performing a little better. Motorway runs returned MPG figures in the 30s. Town based use did drop below 20MPG but that was down to London traffic, notorious for its very slow average speed. So when Redex got in touch and asked if I would be interested in the trial, I knew the XJ8 would be the perfect test bed.

For the trial I have been supplied with one bottle of Redex Advanced Fuel System Clean Up. This is designed to be used every 3,000 miles and claims to help reduce emissions, improve performance and fuel usage. It also claims it can help clean a cars fuel injectors, which can build up deposits over time. In addition to the Advanced Fuel System Clean Up, I was also supplied twelve bottles of Redex Petrol System Cleaner. This is designed to be used with every fuel fill up and claims to help keep the fuel system clean with regular use.

So for the basis of this test I will be making regular updates on my website over the next few months. I will also be making a Vlog video series where I will record how the products perform. I will gather all my thoughts together at the end and put it all into one video, summing up how I thought the Jaguar XJ8 responded to using Redex. This will appear on my YouTube Channel at the end of the trial. Will I see an increase in the big saloons MPG figures? I’m looking forward to finding out!

To start the trial off I have run the XJ8 low on fuel. I didn’t let the fuel gauge go right to the bottom, but the range on the trip computer told me I had about 30 miles left. Which for me was low enough. I did this as I wanted to make sure the Jaguar had as much fresh fuel in the tank as possible, without running the risk of disturbing any potential debris in the bottom of the petrol tank.

After filling the Jaguar up with standard unleaded petrol (at a cost of £81.96 for 65.6 litres I might add!), I added the full bottle of Redex Advanced Fuel System Clean Up. I then reset the trip computer to zero and made a note of the cars mileage. The trip computer estimated it had a range of 319 miles, an optimistic number I feel. But it will be interesting to see how the fuel additives affect the range and average MPG.

Part 2 of Take to the Road’s Redex Trail