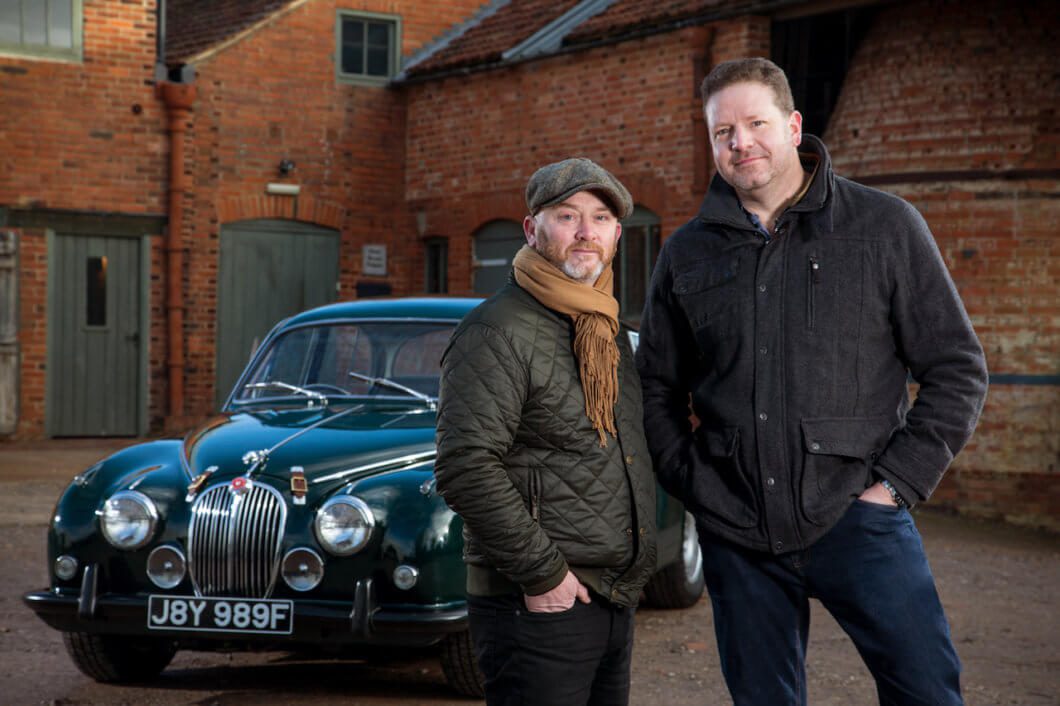 It’s been a great start to 2018 for petrolheads with the return of Wheeler Dealers and the upcoming new series Goblin Works Garage. And if that wasn’t enough to excite classic cars fans, another brand new car show called Salvage Hunters Classic Cars is about to hit our screens on Quest. This exciting new tv series brings together antiques expert Drew Pritchard and motoring guru Paul Cowland. They both share a massive passion for classic cars and have teamed up to bring that passion to our tv screens. Here is what they had to say about their brand new show.

What can classic car fans look forward to in the new series of Salvage Hunters Classic Cars?

Drew – We’ve made this show for classic car fans. This is for people who get it already, who are so deep into their hobby that there’s no getting out. They can follow me and Paul on the reality of buying an old car. Its about the fun and the excitement you get when you find an old car. And car fans can watch us go through all the work that has to be done, how much it costs, why we are doing it. Then the car goes out to a real world buyer. And I think the word real is everything that is involved with this show. Its taken us nearly a year to put these cars through, they aren’t rushed out. It really is a show made for petrolheads.

Paul – Reality television isn’t always that real. What you see with our show where we buy the cars, who we buy them from, how they are done and who buys them… plus the time scales… it is all real. Each episode has two cars in quite some depth and we tried to cover as much as possible. Loads of stuff really went wrong, but where some car shows overplay fake jeopardy, we actually under played it.

Drew, many people will be familiar with your antiques tv series Salvage Hunters. When did your passion for classics first start?

For as long as I can remember really. My earliest memory was of my fathers derelict MGC convertible in the garden. I used to sit in that and play and think I was driving. I used to spend hours in it. It was dark blue and had a big banjo steering wheel on it. I used to go to school in a knackered Jaguar XK120 or a knackered Aston Martin DB2. That one was literally rusting away. The 1954 Oval that my Mum used to me up from school. Also having my breakfast with a Norton International with its wheels off on the kitchen table… that helped as well. I drove my first car at eleven which was a 1924 Austin 12.

Since then I’ve owned nearly two hundred classic and sports cars. I now race them. It is something I love with a passion. For me both antiques and cars can be the highest form of art. Without the modernism movement we wouldn’t have the Mk2 Golf. Without the British airplane industry we wouldn’t the Mk2 Jaguar. And all of these histories that I trace back, I just love. It’s a lifestyle for me.

Paul you hit the tv screens in the car show Turbo Pickers and now you’ve teamed up with Drew. What was it like working with an antique furniture expert?

Terrible! It was an ordeal! No seriously, all joking aside we’ve had an awful lot of fun making this show. I met Drew about four years ago and we got on so well. And I helped him get his race license. We’re into some many of the same things. There’s a massive broad margin of cars in the middle that we both absolutely love. Then on the periphery there’s things I love that he hates. Also most people know Drew as an antiques expert but I don’t think they realise how into cars he is. We’ve both learned quite a lot of car stuff from each other. Plus what I loved was his insight into design. He sees things that I don’t see. And it’s nice to get that take on things.

In one of the episodes of the new series, you buy a VW Golf GTi Mk1 and a Lotus Elan 2+2. What made you choose those cars?

Paul –  We had to have a Golf GTi. We’re both Volkswagen nutters basically. Mainly air cooled but water cooled as well. I’ve got a Mk2 Golf race car, a Mk2 GTI Engineering and a Mk1 Rieger. So we had to have a Golf in the series. And a GTi came up locally and it was the right money. It was a really nice car. So it had to go in. And with the Lotus Elan, we actually wanted to do one and then we thought about the Elan 2+2. It’s more affordable and probably more usable than a standard Elan. And again it was a really nice car. Plus as a drivers car, as it has the slightly longer wheelbase, it handles a lot better.

Drew – We aren’t buying old snotters and trying to hold them together. We are buying the best cars that we can that we are able to then alter. The Mini was a really good car under the skin, so was the Lotus, the Porsche and the Jaguar. They’d fallen off the wagon and needed to be put back together properly. But they were unmodified original cars. And that’s where its at for us. Just subtly tweak them and make them better.

Did any of the classics you bought for Salvage Hunters Classic Cars throw up any nightmare problems?

Paul – I’m nearly twenty five years in the trade now. Although we had lots of problems, nothing was actually surprising or terrifying. We’ve been here before hundreds of times. But we had a Porsche 928 which we knew had electrical problems. We took the dashboard out to check the connections and found that mice had been there before. They’d had an orgy behind the dash and most of the wiring had been severed. They’d eaten all the way though. So we pretty much had to rewire that car from scratch. And even though its from 1982, it has a lot of wiring. We also took the relay board out from under the passengers seat and refreshed all the connections, spade terminals and relays. So we basically did all the electrics and its probably the only Porsche 928 in the world that doesn’t have electrical problems.

Did you have any major disagreements on any of the projects you bought for Salvage Hunters Classic Cars?

Drew – I wanted to paint the Mini black but Paul was having none of it. Plus I wanted to do a colour change on the Mercedes and Paul didn’t. And even yesterday he was saying it still looks awful in Gold. It’s actually the only car we haven’t sold yet. But it was the right decision. Trust me!

Paul – That was mainly it really. We disagreed on some minor aspects but on all the core jobs we do see things the same way. Drew is very design lead so it has to be this colour or that colour. To be fair when he changed the colour on the Lotus that was the right decision. It looked so much better. And that’s what sold the car. With the Mini we were going to do Old English White and then I saw one in the paint shop in Tweed Grey. Literally as it went into the booth we changed the colour. And it wasn’t one we’d thought of. We also sold the Mini because of the colour.

What was your favourite car of the Salvage Hunters Classic Cars series?

Drew – Mine was the Mk2 Jaguar. You know how they rust. This was a RHD Mk2 Jaguar that had never rusted! A year after it was bought it was shipped to California. So it was rock solid. There was a tiny hole in the boot and a tiny bit under the radiator but that was it. It was unbelievable. I had a very pure vision of what I wanted to do with this car. I’ve changed it and given it a whole different feeling, but still in period. Everything that we did to it could have been done in period. Nothing was incorrect. And it then sold very quickly to a guy who bought it because of what we’d done to it. What I wanted to get across in the car, he got it and bought it. The car looked cool as hell. And that made me very happy. It was so good, so good!

Paul – I can’t decide between the Golf and the Mini but I’m gonna say the Golf. It was a lovely 1982 Mk1 Golf GTi 1600. Which I think is the sweetest engine. It was a lovely car that had been slightly messed about with. We put it all back to standard. It now looks as close as you can get to 1982, walking into the show room, putting your money down and driving away with a Golf GTi. It’s so nice!

Drew you have the chance to buy a genuine Louis 16th chair or a Reliant Scimitar GTSE4 V6. Which would you choose?

Well that’s an easy one. I know a lot about furniture and it definitely wouldn’t be the French chair. They didn’t make their chairs very well I’m afraid. So I’d go for the Scimitar. I’d have more fun out of it. I’ve never owned one and I quite like the Mk1 Coupe which is quite rare now. But yes I’d have more fun with the Reliant than a rubbish French chair.

Paul you have the chance to buy a mint show room condition Isuzu Trooper 3.1D Turbo or a Citroen BX19 GTi. Which would you choose?

Citroen BX19 GTi! I love that car. In fact I tried to buy one last year. Plus I’ve got three Troopers already. I actually remember in 1985 when the BX19 came out. It was an amazing piece of design with a lovely suspension. So yeah… one of those… all day long! And it is very underrated.

Drew Pritchard and Paul Cowland were talking to Niall Julian