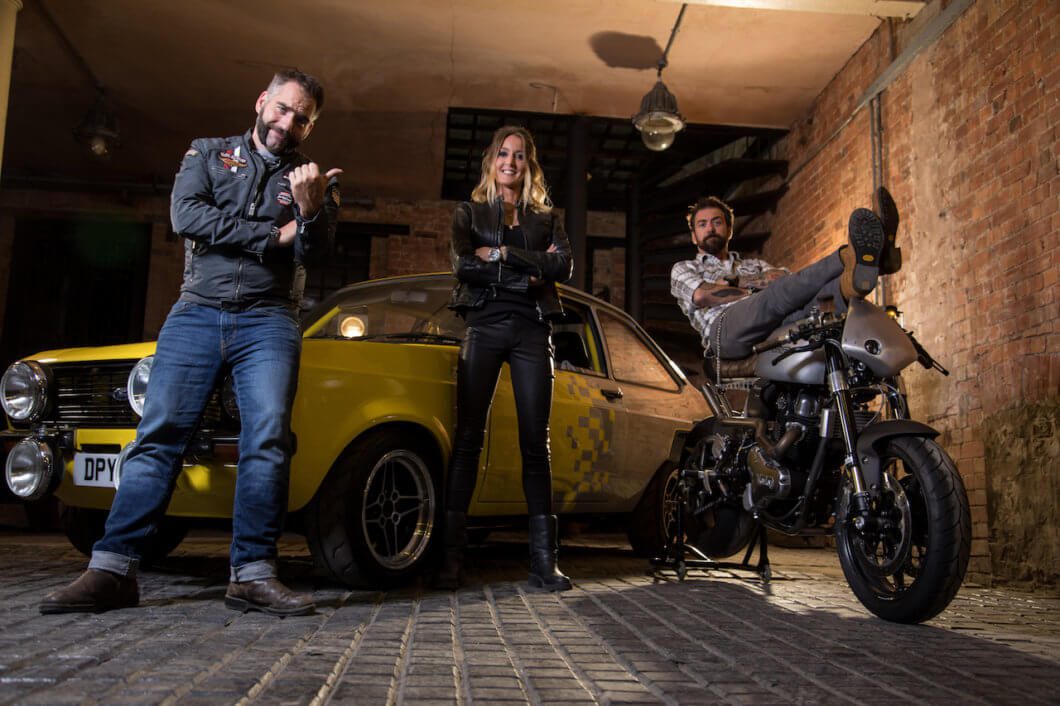 Classic car tv shows are all the rage these days, the result of a surging public interest in classic cars. One brand new show however stands out from the rest. And that is custom car and motorbike show Goblin Works Garage. Take to the Road recently got the chance to chat with the shows stars Jimmy DeVille, Helen Stanley and Ant Partridge about their new show.

Goblin Works Garage hits the screens in the New Year. What can car fans expect from the new show? And what is different about it compared to other classic car shows?

Jimmy – They can expect us to build cars and bikes that will mess with peoples conceptions of motor vehicles. It will give the British Motor industry a breath of fresh air, as we like to mix it up a bit. We even have a 94 year old grandma doing 150mph at Santa Pod.

Ant – There’s lots of blood and tears and swearing and me weeing on a car. And Helen crashes a car too! I don’t think the studio really knew what they were getting into!

Helen –  I think that’s what sets us aside from the others. We build custom bikes and cars and we are real petrolheads. We work in the industry and we’ve come together to create something really different and really mad. The show is as much about our passion as it is about the builds themselves.

Goblin Works as a name is a little different now to how some people will remember it. What is it like resurrecting an old British engineering icon?

Jimmy – They made lots of different things from vacuum cleaners to tea making machines. But they were also involved in the British fighter jet program doing top secret work. I was actually in a chicken shed in Norfolk and this guy had bought all the spares for the old V bombers. I was looking for a part for a jet engine I was building. And I found this part that had Goblin Works Surrey written on it. It looked pretty cool. I did some research and found that the company had gone. But I thought the name was really what we were about, doing things differently and using proper craftsmanship. It was one of those moments when I found the bits for my jet engine project but I also found something else as well. And here we are now.

Jimmy, with your background in extreme engineering, engine building and product design, what is it like taking that experience and working on classics?

I’ve been working with old cars for years. I own Land Rovers and you don’t get to own one without working on it. I’ve built cars for other tv shows so its something I have been doing, just not in the public eye. Now it is pretty much all my dreams come true. Living your passion should be what life is all about. I’m blessed to be able to do that.

Helen what is it like for you to bring your custom car build and mechanical know how onto the show?

Compared to these guys I’m quite new to the scene. I’ve always been a petrolhead but started my own custom shop in 2014. But I’m from a design background so I brought a different approach to the table. My role just fitted in nicely and we all compliment each other. I hope in general it gets more people to get into custom work. Back at school I was very creative and I’m really glad I gave up my old career as a visual mechandiser. It’s never too late to follow your dreams. I’m really happy now and that is the message I want to get across… if you really love cars just do it. It might seem daunting at first but just get stuck in.

Ant you are the shows motorbike guy. Do you find yourself torn between bikes and cars?

Not at all! I love bikes. Don’t get me wrong I love cars more now than I did before the show. But I will always take a bike over a car. You are more vulnerable on a bike, going round a corner with your head two feet off the ground and you’re doing 150mph. There’s no other feeling like it. But saying that I do love cars, I love the design and engines and petrol. I like loud vehicles and angry things. I enjoy pissing people off with the things that we do. If it upsets people I quite enjoy that.

Which of the six cars that you restored on Goblin Works Garage is your favorite?

Ant – They all have different elements that we love. It’s really hard to say. Driving wise I’m in love with the Escort. I just want to keep it and lose my license in it. Honestly it is the funnest car to drive. It’s just insane. The Ford Capri though is mental. If you have a large life insurance policy on your beloved and want to let them drive it and make some money, it’s a good car to choose! The Land Rover I hated when we started on it but I grew to love it. The Chevy pickup truck was great and the other two had no idea I bought it until I turned up with it. They’ve all got something we all love.

Helen – I’m a big classic Ford fan. So for me it was the Capri. It just spoke to me and it was pure evil. I loved it!

Jimmy – I’m a massive Land Rover fan and have owned them all my life. To do one that upsets the Land Rover purists, even though I consider myself to be one… I just love that whole debate that cars and bikes create. Doing one where I could easily stand on either side of the fence was just great. It ticks my boxes!

Not mentioning the little incident Helen had with the Escort, which was the toughest build on Goblin Works Garage?

Ant – Me and Jimmy struggled like hell with the Capri’s wheel arches. At one point we almost gave up and took a weeks holiday, just to get away from it. It almost killed us. And we had a few battles with the Land Rover. It was a struggle to get everything done. But we built six cars and four bikes in six months. And we are still friends!

Helen – There’s elements with each one. Trying to lift the suspension on the Chevy truck was a pain. We are a business at the end of the day and we have a budget to work too. As much as we like getting stuck in on the vehicles and do exactly what we want, we are trying to get them to a standard. And modify them as well! With all custom work there’s always going to be massive issues on what ever you do. Nothing is a simple project. Each one had issues. But as long as you are prepared for them, then you just have to adjust life accordingly.

Jimmy – The one that gave us the most tears was the arches for the Capri. They were a nightmare! The guy we got the wheel arches off, I’ve no idea what shape his Capri was but it didn’t match ours! It should have been easy and quick but it turned out to be a lot harder than we thought. We’d have been quicker making them by hand.

You’ve all got the chance to buy the ultimate classic car. Money no object. What would you go for?

Jimmy – I’d go with an old school Bugatti. Like really old. I don’t know which model as I never bother looking. But an old coach works Bugatti.

Helen – I’d go with an American Ford and a British Ford. I’d have a 1965 Mustang Fastback. But my ideas are always changing and I dream about them a lot. But at the moment I’d have a Sierra Cosworth as I love them. But tomorrow it could be a Transit van or something else. But definitely Ford flavored.