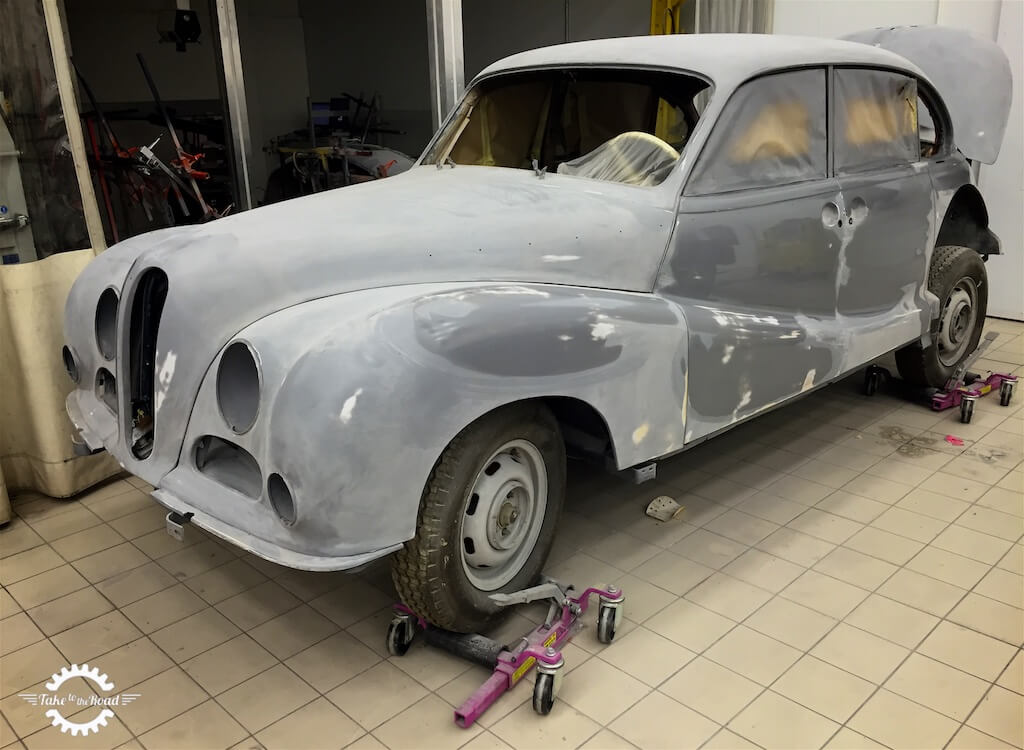 We recently got an invite from Waterloo Classics Club founder Darren Sullivan Vince to check out his BMW 502, which is currently undergoing a complete restoration. The 502 was the German marques V8 powered luxury saloon that was developed after the war, its lavish styling earning it the nickname “Barock Engel” or “Baroque Angel”. We’ve never seen a Baroque Angel in the flesh but we did feature one that required a full restoration back in April last year (read our feature here). So needless to say we jumped at the chance to see one for real.

Darren collected us in his restored Volvo P1800ES which we have to say was very appropriate transport for the day. We’ve been in a P1800S and it was of course the first car we featured on our YouTube Channel (watch the film here). So Darren’s example is essentially the more practical, shooting brake version of the Swedish sports coupe. It certainly was a classy car to arrive in at the body shop and we enjoyed the drive in the coolest estate ever made by Volvo.

Car body shops, especially ones that restore classic cars are a bit of an Aladdin’s cave for us enthusiasts. You never know what you will find being restored and the whole process of painting a car is one that requires a lot of patience, skill and a dash of magic. It’s quite exciting really. And we weren’t disappointed with what we saw inside.

In the corner of the shop floor sat Darren’s project. The BMW 502 body has undergone months of careful preparation and it now sits ready for paint. Even in blocked primer the 502 is an incredibly elegant car. The lines and curves are graceful and it is easy to see how it earned the Baroque Angel nickname, even without its chrome embellishments fitted.

Once the car is painted, Darren will take over and put it back together himself in his own workshop. The seats have been re-trimmed, the engine and gearbox are ready to go back in the car. There is still a lot of work ahead before the 502 goes for it’s first MOT. But we know it will be worth the effort.

Whilst we were there we checked out a couple of other cars that were mid restoration. These included a rare 1967 Chevrolet Chevelle Two Post (which basically means its not a pillarless coupe, which a lot of them were) and a MGB GT which has a Stage 2 tuned 250BHP Rover V8 engine. Basically, its a bit of a beast. Below are some photos plus a few other cars that caught our eye.