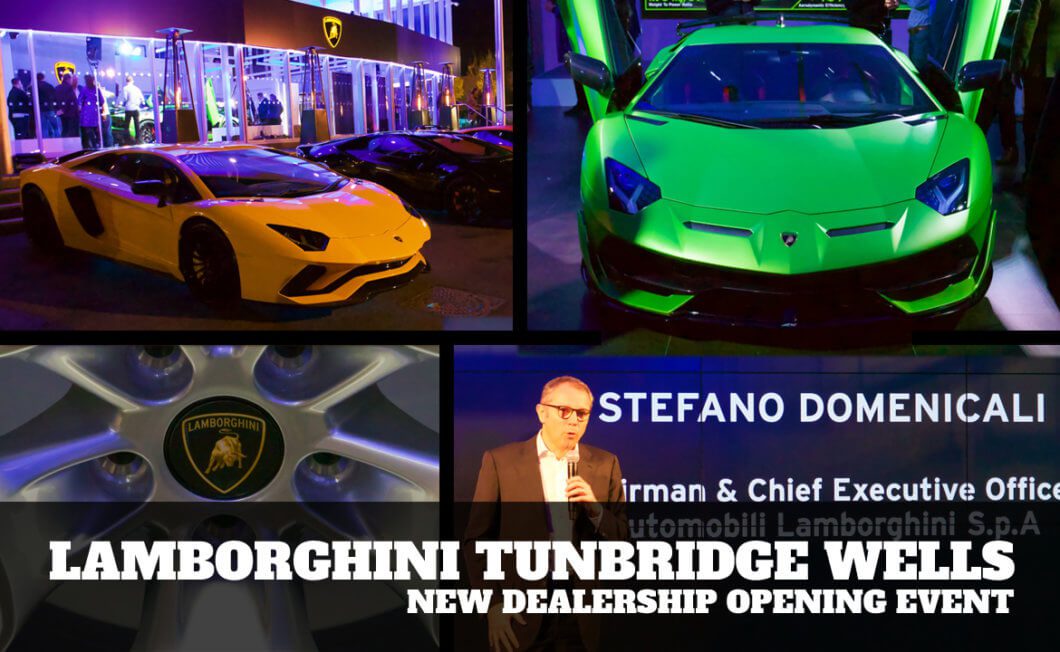 On Tuesday 6th November Take to the Road attended the official opening of the brand new Lamborghini Tunbridge Wells. The invite only event saw the unveiling of the new Lamborghini Aventador SVJ Coupe, which was introduced to the 200 plus VIP crowd by Lamborghini Chairman and CEO Stefano Domenicali.

The new Lamborghini showroom, the second opened by Cambria Automobiles PLC, was packed with fans eager to see the most exciting Lamborghini supercar to date.

“I am pleased to have officially launched Cambria’s second Lamborghini dealership following the successful opening of our Chelmsford operation earlier this year. It was an honour to host Stefano Domenicali in Tunbridge Wells last night and to give guests the chance to see our fantastic new facilities, along with an exclusive glimpse of the Lamborghini Aventador SVJ Coupé. We look forward to developing our relationship with this high luxury brand as it continues to produce cutting edge new models.”

“The UK is a significant and growing market for Lamborghini. The investment made by our partners in new dealerships, both here and around the world, reflects our brand’s growing appeal, particularly among a broader audience attracted by the new Lamborghini Urus. This new UK facility perfectly represents the marque, not only in terms of our corporate identity but most importantly, as an environment to present our expanding model line-up to a diverse and growing client base.”

As soon as the covers came off the crowd descended on the Aventador, with long queues forming as everyone took their turn to sit inside the cockpit of one of the worlds fastests supercars.

Such was the interest in the SVJ Coupe it took over an hour to get a seat inside. But it was well worth the wait.

So what was Take to the Road’s verdict on the Lamborghini Aventador SVJ Coupe? It is striking, especially in green! The Aventador is best described a weapon for the road, the sharp angles giving the supercar an aggressive look.

Yet details like the subtle almost double bubble effect in the roof, with the dip in the middle, are a nice nod to a design style once used by the great Zagato. This car is all about the legendary V12, but if you stand and gaze at the shape, you can really take in the details that Lamborghini’s designers put so much effort into.

There wasn’t a huge amount of time spent inside the car, such was the interest. It was literally a case of jump in, savor the moment and jump out again.

However in those few moments the interior looked stunning, with the seats incredibly comfortable and with side bolster support that can only enhance your confidence when taking this beast into a fast corner.

After a fantastic evening at the new Lamborghini Tunbridge Wells, the first task on getting home was to spec Take to the Road’s very own Lamborghini Aventador SVJ Coupe. To see what we chose take a look here. We think it looks awesome!