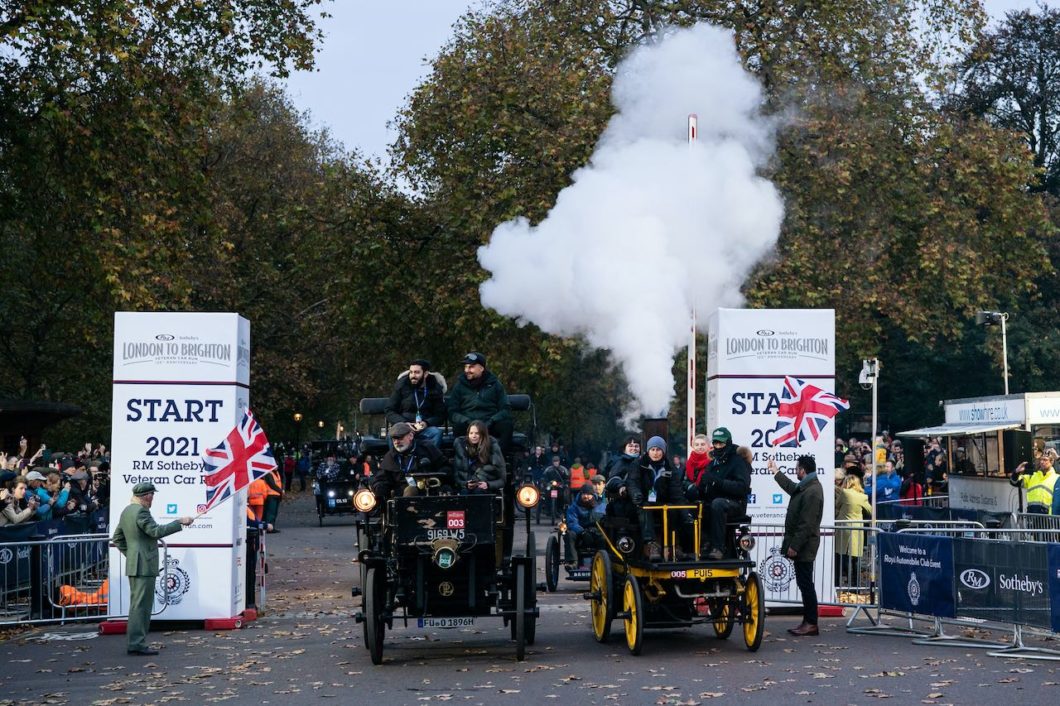 The London to Brighton Veteran Car Run reached its milestone 125th anniversary over the weekend, with 300 pioneering veteran cars and their drivers and passengers setting off on the annual pilgrimage from the capital to the south coast. Darkness still shrouded Hyde Park as the drivers and their participants gathered round their vintage vehicles on Sunday 7th November, the sun gradually making it appearance as the cars headed out of London.

As daylight arrived a collection of pre-1905 motor and pedal cycles left the start line, with the pair of brave-hearted penny-farthing peddlers attracting admiration as they embarked for Madeira Drive in Brighton. Then at 07:06am sunrise, the first batch of the pre-1905 horseless carriages was flagged away by Wing Commander Andy Green OBE and Ben Cussons, Chairman of the Royal Automobile Club.

The earliest of the Victorian ‘light locomotive’ vehicles lead the cavalcade as they phutted and hissed their way through Wellington Arch, down Constitution Hill, past Buckingham Palace, Admiralty Arch and Whitehall into Parliament Square. Here the 60-mile route split into two thus alleviating traffic congestion in South London.

Half of the plucky participants followed the traditional A23 route past Big Ben and over Westminster Bridge via Kennington, Brixton and Streatham Common. The other half journeyed via Lambeth Bridge and then through Vauxhall, Clapham Common and Tooting. The two routes then merged on the A236 just north of Croydon with the entire magical cavalcade reunited as it headed towards the challenges of the South Downs and eventually the Madeira Drive seafront in Brighton.

First to set off from Hyde Park was a single-cylinder, 4 bhp Lutzmann dating back to the dawn of motoring in 1896, which was followed by the world’s only Raynaud. Other early starters included the ever popular Salvesen Steam Car which is basically a road going steam locomotive, complete with a stoker shoveling coal into the boiler’s fiery furnace and a number of primitive motorised tricycles complete with riders and passengers sporting period costumes.

In total, 87 different marques ranging from Albion and Alldays to Winton and Wolseley were represented on this year’s entry – some, like Cadillac, Renault, Vauxhall and Mercedes, still well-known today, but the vast majority lost to history.

Having ably assisted with the tearing of the red flag and in complete contrast to his heroics when topping 760mph to break the sound barrier in Thrust SSC back in 1997, Green was driving his recently acquired 1904 Stanley steam car.

“I’ve been lucky enough to have been a passenger on past Runs but doing it in your own car gives you such an incredible sense of achievement,” said Green. “The most remarkable thing about this event, though, are the crowds. There are hundreds and hundreds in Hyde Park to wave you off, thousands more on the pavements in London and it’s the same story in all villages.”

“This is not just about a few people with some quirky old cars in November – this is much, much more than that. The Run delivers something that makes huge numbers of people smile and wave. I can’t think of any other event that brings so much happiness to so many people over 60 wonderful miles. It’s such a privilege to take part.”

Paul Cowland of TV’s Salvage Hunters: Classic Cars was also taking part in the 125th anniversary run. He was on board a 1903 Knox entered by specialist insurer and event partner Hagerty.

Maximising the spectacular weather the vast majority of the 286 starters completed the hallowed journey to Brighton well before the 4.30pm deadline to claim a coveted finishers’ medal.

The first car to reach a sun-drenched Sussex seafront was the 1902 Mors driven by Clive Evison – the French four-cylinder machine completing the journey from capital to coast in just under three hours. Another of the notable finishers was the ever-popular Genevieve – the 1904 Darracq from the fifties British comedy film of the same name starring Kenneth More and Kay Kendall.

While the London to Brighton Veteran Car Run is not a race, the A. Lange & Söhne Regularity Time Trial provided a competitive element with participants attempting to keep to a strict pre-selected average speed for the stretch between Croydon and Redhill. The winner was Austrian entrant Andreas Melkus driving an 1902 Curved-dash Oldsmobile runaround, who covered the 10.7 miles section in 35 minutes 45 seconds, just five seconds over his target time.

“The RM Sotheby’s Veteran Car Run embodies the true spirit of motoring and it is always rewarding to see that the passion and enthusiasm for these pioneer motor cars is as strong as ever,” said Cussons.

“The glorious weather has been really kind this year, which makes a big difference for these types of extraordinary vehicles, and I have seen lots of happy smiling faces amongst our participants, many saying this has been their best-ever Run.”

“I would, once again, like to thank all the people that have come together to make this 125th anniversary event so special. Thanks must go first to all those who keep these amazing cars going and then to all the marshals and volunteers who made it such a real pleasure to drive from London to Brighton.”

“My final thank you is to the astonishing numbers of spectators who, as ever, have lined the route from start to finish, offering fabulous support and encouragement to all of us following in the wheel-tracks of those incredible pioneers who first set out to Brighton 125 years ago.”