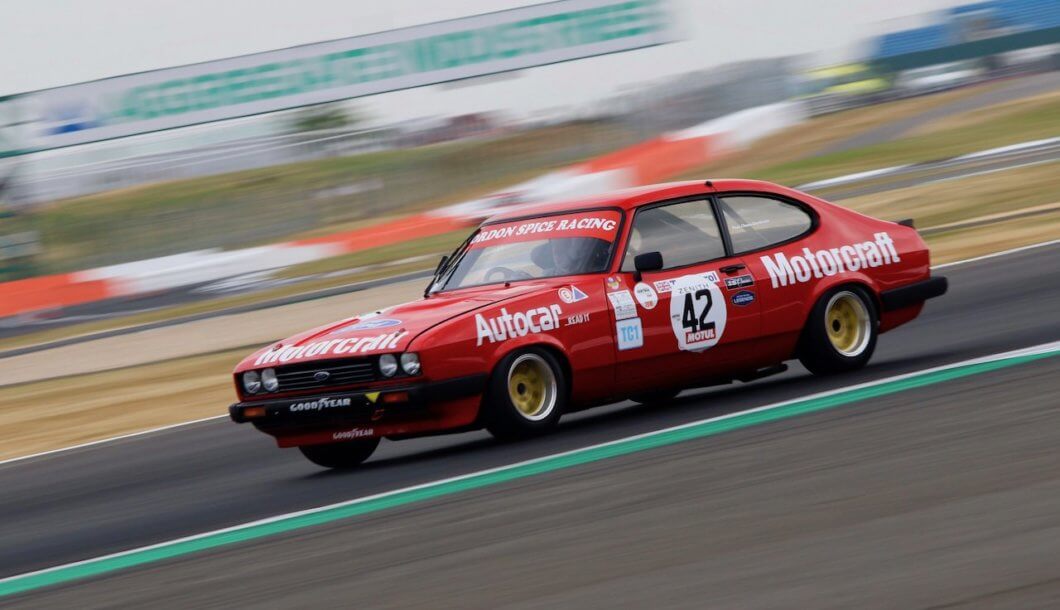 The world’s most successful Capri racer will lead the celebrations honouring the Ford fastback’s golden anniversary at this summer’s Silverstone Classic (26-28 July).

For five seasons in succession between 1976 and 1980, Gordon Spice took top class honours in the British Saloon Car Championship, taking the Mustang-inspired coupé to no fewer than 24 outright race victories (photo below bottom).

With the Capri turning 50 this year, the tin-top racing legend will present a special trophy to the top-performing Capri in the crowd-pleasing Historic Touring Car Challenge (HTCC) race at the Classic.

“The Capri was very important to me,” reflected Spice, who further proved his talent by lifting the Group C2 World Endurance Championship crown when racing a sports prototype produced and entered by his own Spice Engineering company.

“The Capri was by far the easiest car I ever raced. There was absolutely nothing complicated about it – the rear-drive chassis was simple to tune, so it handled really, really well. Just a brilliant motor car.”

First unveiled at the Brussels Motor Show in January 1969 and marketed by Ford as ‘The Car You Always Promised Yourself’, close to two million Capris were produced before the model’s demise at the end of 1986.

As well as finding huge favour in the showrooms, Capris were popular in motor sport – notably in Britain where they totally ruled the country’s premier touring car series after the bigger-engined American muscle cars were banned at the end of the 1975 season.

Despite facing fierce competition – mostly from rival three-litre Capris – Spice was very much the man to beat for the following five years, right up to the moment a subsequent rule change permitted the introduction of the larger-engined Rover Vitesses, thus ending the Ford’s domination.

Today’s flourishing HTCC features large numbers of Capris – including some actually raced by Spice in period – Rovers and other iconic saloon cars from that much-loved era, many adding to the memories by still competing in evocative period liveries.

Providing further spectacle, for the first time this year’s grid at the Classic will also permit official entries from a number of later-generation, flame-spitting Ford Cosworth RS500s.

In the past, the high-performance Sierras have raced regularly with the Super Touring field. However, due to diminishing number of cars competing in this grid and an already packed track schedule, the super tourers will be taking a break from the Classic this year.

Appropriately, though, the coveted one-off Gordon Spice Trophy will be presented by Spice to the first Capri past the finishing post.

“I’m absolutely delighted to have been given this honour,” said Spice, now aged 78. “I never miss the Classic; it’s one of my favourite race meetings of the year and it is always wonderful to see so many Capris still racing today – 50 years is a long time!”

To mark the occasion, organisers have also confirmed that they will be holding a celebratory anniversary parade for the Ford Capri on the Sunday of the event for those car club members joining in the festivities with their Ford Capris. This will be fronted by the last Capri to roll off the production line in Cologne – a limited edition 280 ‘Brooklands’ model owned by Ford’s heritage workshop.

Visitors keen to relive the heyday of seventies saloon car racing – as well as savouring all the other numerous on- and off-track attractions at the Classic – must buy their tickets in advance. All those purchasing before the end of March can take advantage of a money-saving Early Bird offer.

All tickets grant access to trackside grandstands, live music concerts on Friday and Saturday evenings, both racing paddocks plus the vast majority of the fun-fuelled family entertainment on offer at the ‘rocking and racing’ Classic.

Full details on general admission tickets, car club display packages, hospitality experiences and camping options – as well as all the latest Classic news – can be found at silverstoneclassic.com.