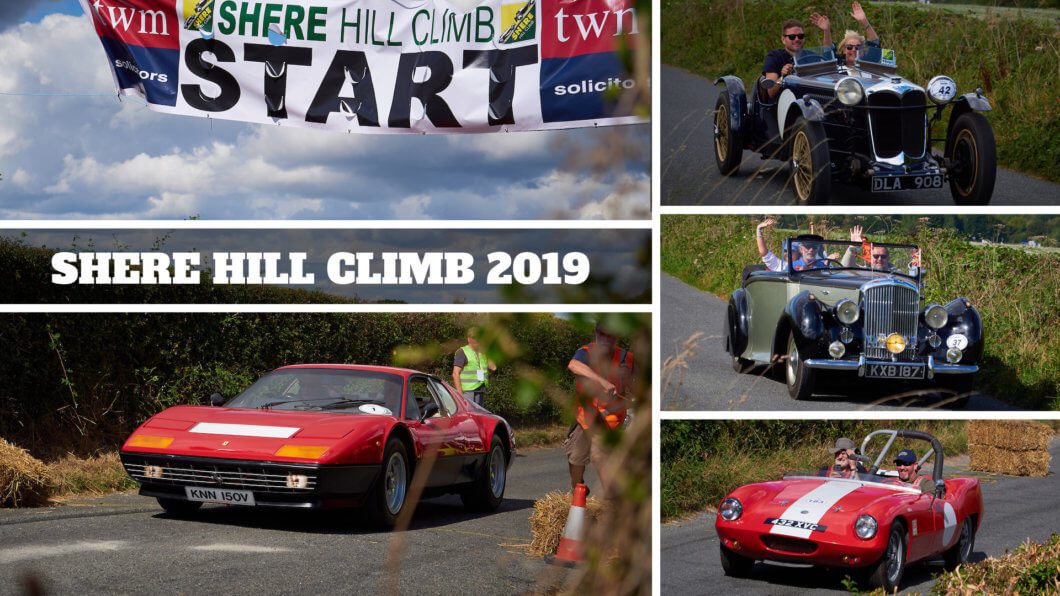 The sun has set on another fantastic Shere Hill Climb which took place on Sunday 1st of September. The weather couldn’t have been better, with large crowds flocking to the UKs premier classic and vintage car hill climb event. Take to the Road was there to soak up the atmosphere and watch some truly fabulous machines fly up the famous hill.

A record 193 cars from all eras and marques were entered in this years event and the caliber of vehicles taking part was exceptional. The organisers selected the most varied field yet, which is no mean feat, given the sheer number of applicants. Such is the popularity of Shere, places were snapped very quickly when applications for entries opened on the 1st of March.

Now in its seventh year, the course runs for roughly one mile on a closed public road. It may look to the untrained eye as just a typical leafy countryside tarmac road. But it is actually quite a challenging circuit, requiring skill from drivers who want to push their car to the legal limit.

However for those who want to just have some fun and soak up the atmosphere, they can simply waft up the hill waving as they go. Which only adds to the relaxed family friendly atmosphere of Shere Hill Climb.

As always with events of this caliber, it is very hard to pick a favorite car, such was the quality of the entrants. This years event was honoured to have the famous Napier Railton race car on display courtesy of Brooklands Museum. It’s shining aluminium coachwork gleamed in the sunshine and it drew quite a crowd of enthusiasts both young and old.

Walking through the paddock there was row upon row of automotive delights with some familiar sights from last years hill climb. These included the fantastic 1907 Berliet Curtiss Special which is a firm favourite at the show.

Another famous car that made it’s return to Shere Hill Climb was the Milla Miglia entered 1954 AC Rudspeed Ace, a superb example of 1950s racing pedigree.

The event was above all a day out with a huge emphasis on fun, with the proceeds for the day going to charity. Plus it was the final weekend before the school season started once again. Which meant a final summer holiday outing for lots of lucky young petrolheads.

The entertainment levels jumped even higher this year with a hilarious reenactment of a classic 1960s Cops and Robbers caper. This featured a group of very determined and unscrupulous bank robbers who did their level best to flee the crime scene in the criminals car of choice, a Jaguar Mk2 Coombs.

Who were of course chased down by the Police in a Jaguar S-Type. It was a fun addition to this years event.

The quirkiness of some of the entrants was topped by the amazingly cute 1948 Larmar Microcar, which was specially designed to fit through a standard British garden gate. It probably set the record the slowest climb up the hill! But it was smiles per mile all the way to the finish line!

Another familiar sight and a car well known to Take to the Road was the very rare and rapid 1966 Unipower GT, which was attending the hill climb for the second time. It flew up the hill like the pocket rocket it is!

Which brings to a close Take to the Road’s coverage of Shere Hill Climb 2019. This years event really raised the bar, taking the hill climb to new levels of both excellence and entertainment. The only downside now is the wait for Shere Hill Climb 2020!

More than just a Pocket Rocket – The 1966 Unipower GT