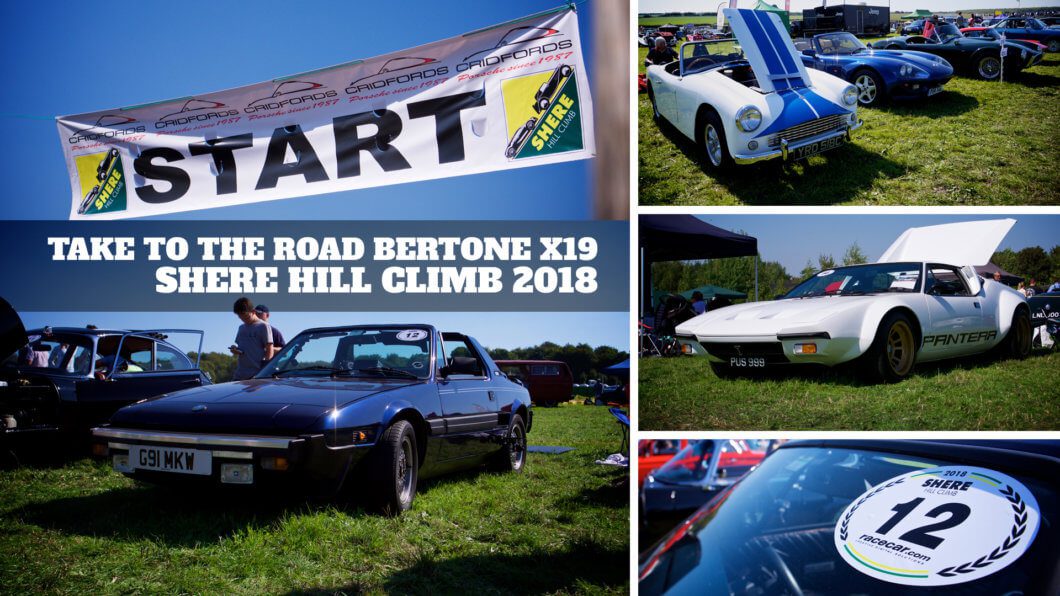 At the weekend Take to the Road took part at Shere Hill Climb 2018 in the Bertone x19 Gran Finale. This was my first time taking part in a hill climb event as a driver. Having been to many hill climbs over the years, I’ve always want to try it out. And after spectating at last years Shere Hill Climb, this time I was was able to get behind the wheel.

It was an early start last Sunday morning. All entrants had to be on site by 8am and I had the M25 to tackle en-route. The one advantage of an early Sunday morning start is hardly any traffic. So I was able to breeze along with only roads works and average speed cameras slowing the Bertone x19 Gran Finale down.

About half way to Shere I ran into trouble. The x19 suddenly didn’t want to accelerate and it felt like a boat anchor had been dropped on the back of the car. I had carb trouble and I really didn’t want to stop and get stuck on the hard shoulder. So I pressed on, stalling at roundabouts and traffic lights. The x19 felt like it wasn’t getting enough fuel. Despite the frustrating stalling I managed to make it to Shere Hill Climb 2018 at 7.30am, where the car promptly conked out just as it pulled into the field. I had made it… just!

I didn’t have any tools with me (mental note for next time!) so all I could do was stare inside the engine bay and look for possible problems. Thankfully one of the event grounds men saw my plight and let me take a few tools from his bag. It was very kind of kind him as those tools proved invaluable. My passenger for the day and friend Damon then arrived on site. With his mechanic background and knowledge of the Fiat x19 (he owns a 1300), we set about diagnosing the problem. He quickly spotted an airbox bolt buried down in the Weber carb. Not good! After digging that out the car fired up and sounded much happier. I quickly jumped in and made my way to Pit 12 which was my spot for the day.

The great thing about Shere Hill Climb is the variety of cars that take part. The organisers have a superb eye and selected some really special cars for this years event. My Bertone x19 Gran Finale felt very honoured to be taking part and with badge number 12, it was pretty close to the start as well.

After the drivers briefing the first run started at 9am, with a Ferrari Testarossa laying down a lot of rubber as it roared up the hill. We got in the queue and headed for the start line. In front of the x19 was a Jaguar e-Type V12 2+2 and behind was a Ferrari 308 GTS. Excitement was building and I have to say I was a little nervous. I’d never driven in a hill climb before so it was a new experience. The flag was raised and the Bertone x19 flew off the start line of Shere Hill Climb 2018.

The car felt good as it shot of the line. The course is one mile long and takes part on a closed public road. So a 60mph speed limit was still in force. As the x19 made its way through the chicanes and the bends I started to notice it didn’t feel right. I know how quick the car is and how it sounds when pushed hard. And it sounded a little off. Still though it flew across the finish line, both Damon and myself impressed with how it went. Then the engine spluttered. Oh great!

We made it back to the pits after a frustrating drive. It had started stalling once again with low revs. It was then we decided to make a quick trip to a local motor factors to get some carb cleaner and a new inline fuel filter, just to be on the safe side. Forty minutes later the new filter was installed and some blasts of carb cleaner seemed to do the trick.

Run number 2 started well. I got a bit more wheel spin this time and the Bertone wedge roared off the line. Again it felt good at the start but as I pressed on it started to complain again. And sure enough it wasn’t happy. It limped back to the pits where it stalled and had to be pushed back into its spot.

This time we took the top of the carb off, removed the jets and found a bit of dirt stuck in one jet. Then to my horror, Damon fished out a washer from the bottom of a float chamber! Oh my! It clearly was part of the air box bolt that had worked loose. I was shocked as I had no idea what was lurking in the carb. I was very lucky the washer hadn’t gone elsewhere.

After whipping everything back on and running the car on idle for a few minutes, we set off for the third and final run up the hill. This time I got more wheel spin and I could smell the rear tyres light up. The x19 charged up the hill but as we hit the first bend the car faltered. It wasn’t happy and this time round, it barely made it to the finish line. The acceleration was so bad the Ferrari 308 behind us actually caught up… oh dear! It clearly wasn’t the x19s day!

So it was a frustrating end to Shere Hill Climb 2018. But despite the problems and the stress and mild panic the Bertone x19 caused, it was still a superb day out. The weather couldn’t have been better. It was a fitting last hurrah of summer before the onset of Autumn. And to end on a positive note, the Bertone x19 drove back home 70 miles and didn’t miss a beat… classic cars eh??!!

See Take to the Roads Highlights of The Goodwood Revival 2018