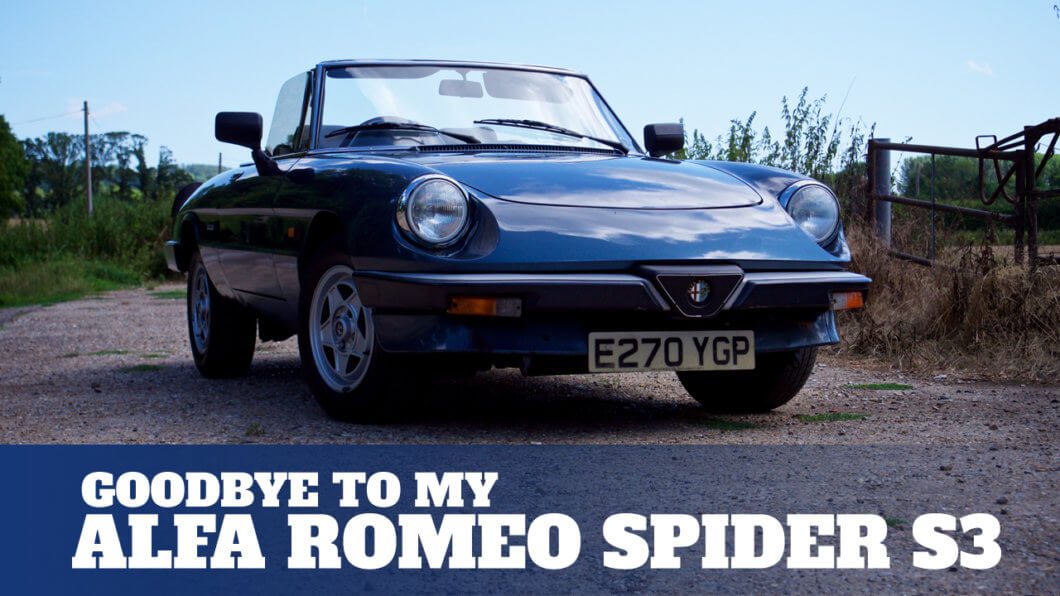 Selling a classic car is always a tough decision to make. For us petrolheads, we usual buy with the heart and not the head. So when the time comes to move your pride and joy on, it can be a hard pill to swallow. Which is how I felt when I decided to sell my Alfa Romeo Spider S3.

In the film I mentioned the phrase “If you are a petrolhead you need to have owned an Alfa Romeo at some stage in your life”. This is almost a given, taken from the proverbial petrolhead bible. The bible that has never been written, but one we have all read. I would actually go a bit further and say you need to add owning a Lancia and a Fiat to that statement. Not everyone will agree of course. But in April last year I scratched the Alfa itch when I bought my 1988 S3 Spider project.

Buying an Alfa Romeo project is always a gamble. Many would run for the hills. But when I viewed the 1988 S3 I could see the potential. Yes of course I was drawn in by the pretty body, the gorgeous five spoke alloys and the whole romance of an Italian convertible. Plus the warble from the twin cam was music to the ears. Yes the exterior was tired, the interior was very scruffy and work needed to be done in the engine bay. But I could see the potential. The rest was just details that could be addressed over time.

As I drove the seventy miles home that April afternoon, I felt excitement at becoming one of the Alfisti. Now I had another Italian to keep my Bertone x19 company. I had a lot of work ahead of me, that I knew. But I was prepared to get stuck in and give the Alfa Romeo Spider S3 the tlc it deserved.

So over the next year and five months, I slowly worked my way through the Spider. First up was sorting all the little gremlins in the engine bay. That involved a new starter motor to replace the old one that was slowly dying. Starting a car with a blunt tool does get a bit boring after a while.

With the new starter installed I turned my attention to the wipers. Old Alfa’s have a reputation for slow wipers, especially the Spiders. I found mine very slow indeed and after much investigating I realised the wiper motor was pretty worn. Despite installing a new one and giving the mechanisms a clean and re-grease, the wipers remained, well, slow… ah a good old Alfa head scratcher moment.

Next up I moved onto the electrical systems. A new distributor cap, rotor arm, ignition leads, plugs, coil and battery gave everything that made things spark a good refresh and a blank slate to start from.

After that it was on to the next task and that was the cooling system. A test of the coolant told me it needed changing and the colour wasn’t the best. Basically it was old and needed flushing out. So the radiator and the cooling system got a dam good flushing and it was treated to some nice fresh coolant.

While in that zone I replaced the engine fan and the radiator shroud. Plus I removed the very poor electric fan which was eating its own bearings and draining the battery. It was actually good to get the engine cooling back to stock. And it looked much better too!

With the cooling system sorted it was now time to turn my attention to the engine itself. Checking through the records it looked like the Spider was last serviced in 2016. So it needed an oil change. Duckhams very kindly offered me some of their new classic motor oil and along with a new oil filter from Classic Alfa, I set about changing the oil. Access wasn’t the easiest but I got the job done.

After going through the engine bay I then took the Alfa Romeo Spider S3 to my local specialist for a carb tune, gearbox oil top up and a diff oil refresh. It was really good to get all these items ticked off the list. The car was driving great and the twin cam sounding superb. The rare Columbo Tecni airbox (which I had cleaned and serviced earlier on) really did give the twin cam a lovely warble. A very addictive one I have to say!

My attention now turned to the interior. All this time I was using the Spider, I was having to put up with the very scruffy interior. Plus it smelled very bad too! Thankfully a previous owner had planned to redo the seats and had already sourced a pair of black leather covers. So a new drivers seat base and some new covers transformed the look of the interior.

Gone was the torn and old beige vinyl, which was well past its best. In addition to that I fitted new door cards to replace the old ones which were well past their time. And while the seats were out, I gave the carpet a good clean and wet vac.

With all that work done, I had achieved what I had set out to do at the start. Which was to make this Alfa Romeo Spider S3 a good driver again. All the work under the bonnet had done the engine a world of good. The twin cam felt lively, the gearbox was tight and the Spider just felt good to drive again. Plus with a refreshed interior it was a nice place to be again.

But after ticking off a long list of jobs I knew I had taken the Spider as far as I could. Realistically the bodywork would need around £5,000 spent on it to get the car up to a god standard. It was an amount I simply didn’t have available to throw at the S3 Spider. Plus with my VW Golf GTi, Bertone x19 and the Vauxhall Viceroy all needing work, I knew something had to go. And that sadly was the Spider.

So after one year and five months of S3 Spider ownership, I was no longer a member of the Alfisti. It is a shame to be no longer part of this special group of petrolheads. But it was the right move to make and the Spider has gone to a good home. It was a positive end to my journey with the Alfa Romeo Spider S3.

So now it is time to turn my attention to my other projects… they are going to keep me busy for quite a while!