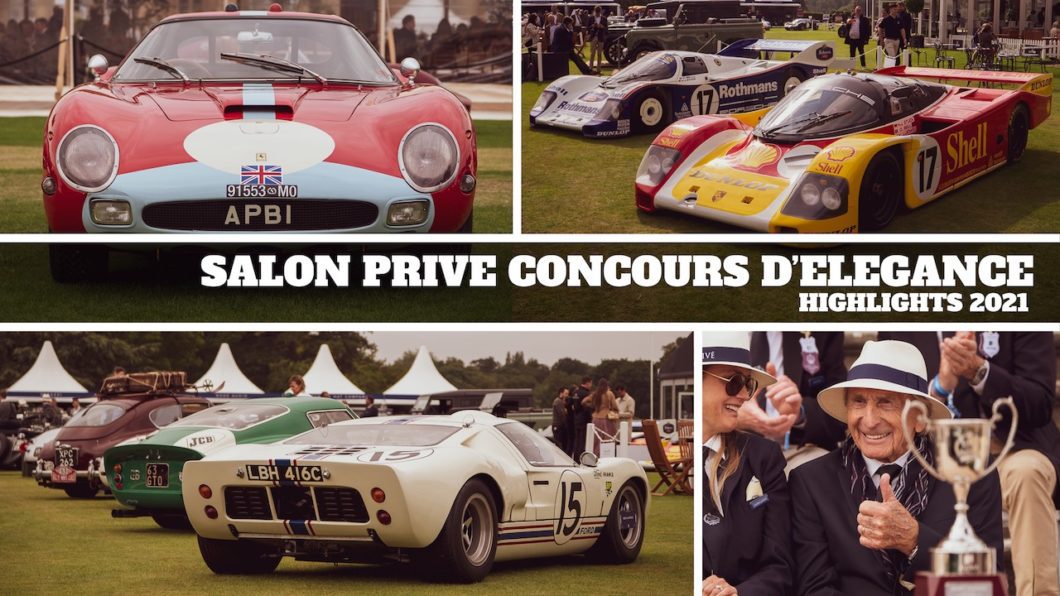 Salon Privé returned to Blenheim Palace on the 1st September for a five day celebration of automotive excellence. This years event included the prestigious Concours d’Elégance, which is a Partner Concours to the Peninsula Classics Best of the Best Award, wowed guests with a presentation of some of the finest collector cars in the world.

Once again the organisers of Salon Privé chose a simply sublime selection of entrants for this years event, with automotive gems of all ages enjoying their moment on the lawns of the palace.

One of the key displays was the Red Collection, which was presented on the historic Blenheim Palace cricket pitch. The centrepiece of this jaw dropping collection was the 1964 Ferrari 250 GTO, chassis 4399 GT.

This particular example was one of four that was rebodied by the factory ahead of the 1964 season and was upgraded to ‘Series 2’ body style. It was driven to victory at Goodwood and Silverstone by Graham Hill in 1964 and Mike Parkes won the Spa 500KM with chassis 4399 GT in the same year. It also finished sixth overall and second in class at the 1964 Le Mans 24 Hours with Innes Ireland and Tony Maggs at the wheel.

It was surrounded by a carefully curated selection of exceptional red cars, including a 1927 Amilcar C6, last year’s Best of Show 1931 Alfa Romeo 8C 2300 Monza Spider, the 1957 Maserati 250 S and the only original red McLaren F1 in the world.

Elsewhere on the lawns another red car caught the eye of Take to the Road and that of leading car designer and Salon Privé Concours Judge Frank Stephenson was the fascinating 1955 Pegaso Z-102B Coupe by Saoutchik.

Pegaso was noted for its striking designs and this super rare Z-102B Coupe with coachwork by Saoutchik is no exception. Originally painted black, its colour was changed to red. This was later deemed too much for the Coupe’s French coachwork and the decision was made to break this up with a grey lower half, which has resulted in its current intriguing colour scheme.

Alas there was no prize for the Pegaso at Salon Prive but both Mr Stephenson and Take to the Road agreed it was an exceptional looking piece of automotive design.

Moving on from the red theme, there were many other gems to be admired and studied, with some notable historic race cars taking pride of place in front of the palace. One of these was the 1967 ex-Ford France GT40. It was exhibited at the Paris Motorshow in October 1965 and it first raced in April 1966 at the Monza 1000km, where it finished in 6th place.

Alongside the GT Ford and adding a touch of the famous Ford v Ferrari rivalry was the Ferrari 250 GTO. This particular car, Chassis 3767 GT was first owned by British privateer racing driver David Piper.

Finished in its distinctive British racing Green, Piper drove his GTO to victory at the Kyalami 9 Hours in 1962. He also won with Chassis 3767 GT at the Angolan Grand Prix in the same year. Piper then sold the car to Ed Cantrell but continued to race it on numerous occassion.

On Friday there was a special moment on the Salon Prive main stage as the historic racing Ferrari was reunited with its former owner David Piper.

Also on display in front of the palace were two icons of Le Mans, the mighty Shell/Dunlop livery Porsche 962-010 Works which was driven by Derek Bell, Hans Stuck and Klaus Ludwig. It was built for the 1988 Le Mans 24 Hours, where it took pole, recorded the fastest lap and finished second overall.

It was joined by the famous Rothmans livery Porsche 962-007 Works, which was also raced by Derek Bell and Hans Stuck. It was built for the 1987 season and utilised the first ever water cooled flat six Porsche engine. It stormed to Le Mans glory in 1987.

A Concours d’Elegance wouldn’t be a concours event without a prize giving ceremony and the judges for this years event included the likes of David Bell, Ian Callum CBE, Yasmin Le Bon, Frank Stephenson and Fabrizio Giugiaro. The task of choosing between the winners and the runners up was quite the challenge, such was the quality of the entrants. Below are some of the cars and owners that received a coveted Salon Prive Concours trophy.

As always at a concours event, there is one over all winner and the car that took home the coveted Best of Show award was the 1938 Mercedes-Benz 540 K Cabriolet A Sindelfingen. This impressive example is one of the last five 540s built and it reflects many aspects of the special roadster. It boasts a 5.4 litre supercharged straight 8, which produced 180 hp and was capable of 110mph.

With Salon Prive over for another year enthusiasts won’t have to wait until next September for the next instalment, thanks to the exciting announcement of a brand-new Salon Privé event ‘The Chelsea Edition’, which is coming to London in April 2022. And Salon Privé itself will return to Blenheim Palace 31 August – 4 September 2022. Take to the Road will be there to report on both shows and can’t wait for the concours season to begin once again.