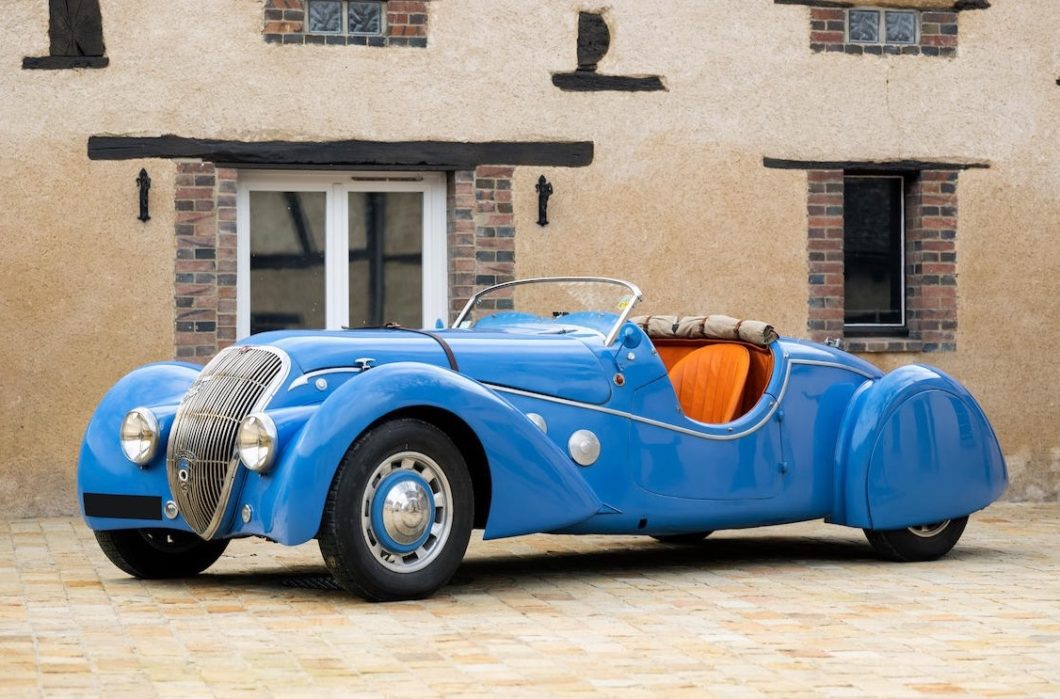 A super rare 1938 Peugeot 402 Darl’mat Special Sport is coming up for sale Bonhams Les Grandes Marques du Monde à Paris on 3rd March 2021. One of just thirty surviving cars, it is a fascinating example of the heady days of the aerodynamic sports car era of the 1930s.

The Art Deco era was responsible for some of the finest motorcars ever created. The distinctive style that the movement inspired naturally found its way into the minds of automobile designers, which resulted in some truly elegant concepts. Such ideas weren’t confined to road cars however, as they heavily influenced the aerodynamic principles that were used to make sports car go even faster.

One of the leading French designers of the period was Georges Paulin, who was responsible for a range of impressive coupes, roadsters and cabriolets. He worked with Carrosserie Pourtout which was founded by Marcel Pourtout in 1925 and with Peugeot distributor Émile Darl’Mat.

Darl’Mat was a champion of the Peugeot brand and convinced the firms top brass to let him create a limited run of sports cars that would honour the glory days of the 24 Heures du Mans. With the blessing of Peugeot, Darl’Mat based his creations on the Peugeot 302 and later the 402 chassis and collaborated with designer Paulin to craft 105 streamlined cars. The Darl’Mat prototype was first shown at the Paris Motor Show in 1936.

Paulin, who was actually a qualified dentist, had a very good understanding of aerodynamics and believed strongly that aerodynamic efficiency negated the need for a large engine capacity. The light weight 2.0ltr four cylinder 402 engine with twin Solex carburetors was capable of 70BHP, which was impressive for its era. The concept proved successful with a 402 Darl’mat roadster finishing 5th overall and 1st in class at the 1938 24 Heures du Mans.

The 402 Darl’mat Special Sports were noted for their high speed stability and handling in period, making them highly sought after by privateer racers. Plus the lightweight chassis meant they could run close to the much larger engine capacity but significantly heavier Delahaye’s and Talbot’s.

The 1938 Peugeot 402 Darl’mat Special Sport being offered for sale by Bonhams at its Paris auction is a very well preserved example that retains its original wooden body frame. It is one of just 30 cars remaining and was not registered until 1940. The cars history in the immediate years after the war is not known but it was sold in the 1970s. At that point the Peugeot was found to have lost its original chassis plate, so the then new owner chose one at random.

The auction description notes that the 402 Darl’mat Special Sport has been maintained by specialists and has benefited from cosmetic and mechanical work at a cost of €50,000. It is noted that the Cotal gearbox is not original and there is no mention of the engine being matching numbers. Most Darl’mat roadsters were fitted with a 4 speed Cotal pre-select gearbox so it is assumed this is what is fitted to the car.

The collaboration between Paulin and Darl’Mat produced one of the finest Art Deco race cars of the period. The streamlined shape makes the Peugeot 402 Darl’mat Special Sport look fast just standing still, the teardrop wings and tail echoing other French marques of the 1930s. It really is a work of art with wonderful details to behold.

It is a fascinating reminder of what was achieved by Paulin and Darl’Mat and is arguably one of the most beautiful Peugeot’s of all time. It combines wonderfully the aerodynamic genius of Paulin with Darl’Mat’s lightweight coachwork and it would make for an very interesting addition to any car collection.