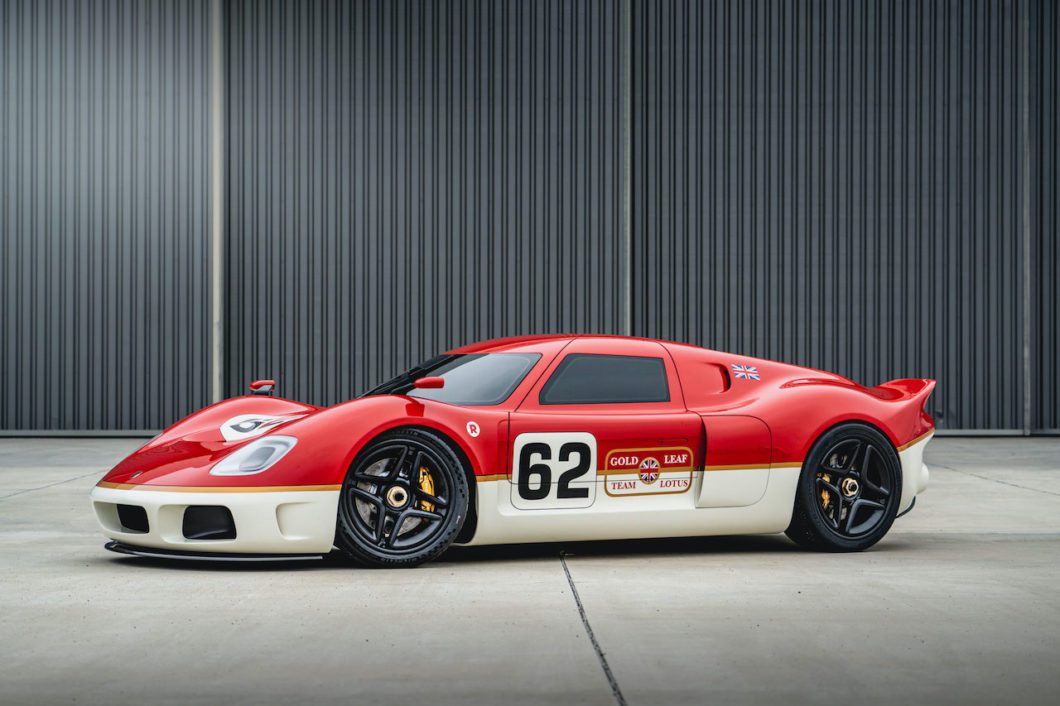 Radford has unveiled its very first sportscar, the Type 62-2 at a star-studded event at the Lyon Air Museum in Orange County, California. The Lotus inspired Type 62-2 will be the first modern coachbuilt Radford and production is limited to just 62 examples worldwide.

Each Type 62-2 will be created precisely to its individual owner’s desired specification and the marque is currently accepting applications for build slots for the ultra-rare coachbuilt car.

Radford first announced its return in May this year with the very first images of its new sports car released later that month. Radford reborn promises to take the famous British coachbuilders name into the 21st century and build further on the coachbuilders rich legacy. The venture is the brainchild of leading designer Mark Stubbs, broadcaster and motoring specialist Ant Anstead, former F1 World Champion, Jenson Button and acclaimed business adviser and lawyer Roger Behle.

Radford’s first new model of the modern era is built in partnership with Lotus. While the mid-engine two-seater coupé takes inspiration from the revered 1960’s Lotus Type 62, it utilises the Hethel marque’s latest technologies to deliver the purest possible driving experience. The Radford Type 62-2 is engineered for a pure mechanical feel, exceptional engagement and uncompromising poise.

The global premiere is the first time the elegant lines of the exterior have been shown, and the highly luxurious interior will be revealed at a future date. The car’s design has been led by preeminent automotive designer Mark Stubbs who has taken the project from a sketch to the production-ready car revealed today. Stubbs’ design for the Type 62-2 evokes the spirit of Lotus and the original Type 62 as a homage to the marque’s illustrious motorsport history.

With support from Radford’s engineers, Jenson Button has fine-honed the response of the Type 62-2 to ensure a superb driving experience. Commenting on developing the cars driveability, Jenson Button stated: “Creating a car that is simultaneously luxurious and comfortable, and great to drive, is a tough challenge, but the first Radford of the modern era delivers. Type 62-2 is a driver’s car at its heart – when you see the design, it looks just like a 70s Le Mans car. And when you sit behind the steering wheel and look through the curved windscreen, you can see the front wheel arches – something you just don’t experience on road cars today. With such a low centre of gravity, the car’s body doesn’t roll. The chassis exhibits all the hallmarks of a beautifully set up race car for the road – gifting the driver supreme confidence to extract maximum enjoyment every journey.”

The Radford Type 62-2 is powered by a 3.5-litre supercharged V6 engine. Keeping to the Lotus race and road car philosophy, it is mid-mounted low to the car’s unique tubular rear subframe behind the driver, delivering an optimum centre of gravity and exemplary road holding.

The mid mounted engine in the Classic Type 62-2 produces 430bhp, and with a predicted dry weight of under 1,000 kilos, it will deliver an impressive power-to-weight ratio in the region of 430bhp per tonne – which is right up there with many modern supercars. The Type 62-2 is being offered with either a six-speed manual gearbox or a seven-speed dual-clutch transmission and is mated to a limited-slip differential.

The new Radford’s chassis and body utilise a blend of carbon composite and aluminium for lightness, which will ensure the car retains the lightweight ethos of the legendary 1960s Lotus.

Ant Anstead added: “When you look at Lotus models from 1948 to today, each of them is numbered from Type 1 right up to the current day, our car is part of that historical lineage, meaning it will take its place in the history books forever. Only 62 Radford Type 62 models will ever be built. No two will be exactly alike, and each will be an exceptionally rare sight on the world’s roads.”

The new Type 62-2 promises to deliver a thrilling sportscar experience, but without sacrificing comfort or practicality making it an everyday drivers car. The car’s door design which pays homage to the original Type-62 also incorporates part of the roof, and was chosen specifically to enhance the ease of ingress and egress. The sill of the aluminium chassis sits low to the ground, and the flat cabin floor is free from obstructions across the width of the car. An optional lift for the front suspension is also available, allowing it to easily clear speed bumps and other road furniture without damaging the car’s bodywork.

Commenting on the launch Mark Stubbs stated: “In many ways, it’s a real challenge creating a tribute to a historic vehicle – because nothing is quite the same as on a contemporary car. Inherently, the wheels are bigger, the overhangs are longer, and the cockpit and engine position are different. The Radford Type 62-2 was always intended as a homage, not a copy – to deliver that successfully means translating the essence of the original Type 62 into the modern world – which is something that I am confident we’ve achieved with the first Radford of the new era.”

Radford Type 62-2 is available in ‘Classic’ and ‘Gold Leaf’ specification and each one will be customised to meet the specific owners requirements. Owners will also have access to a global service network catering for the sale and service of Radford models.