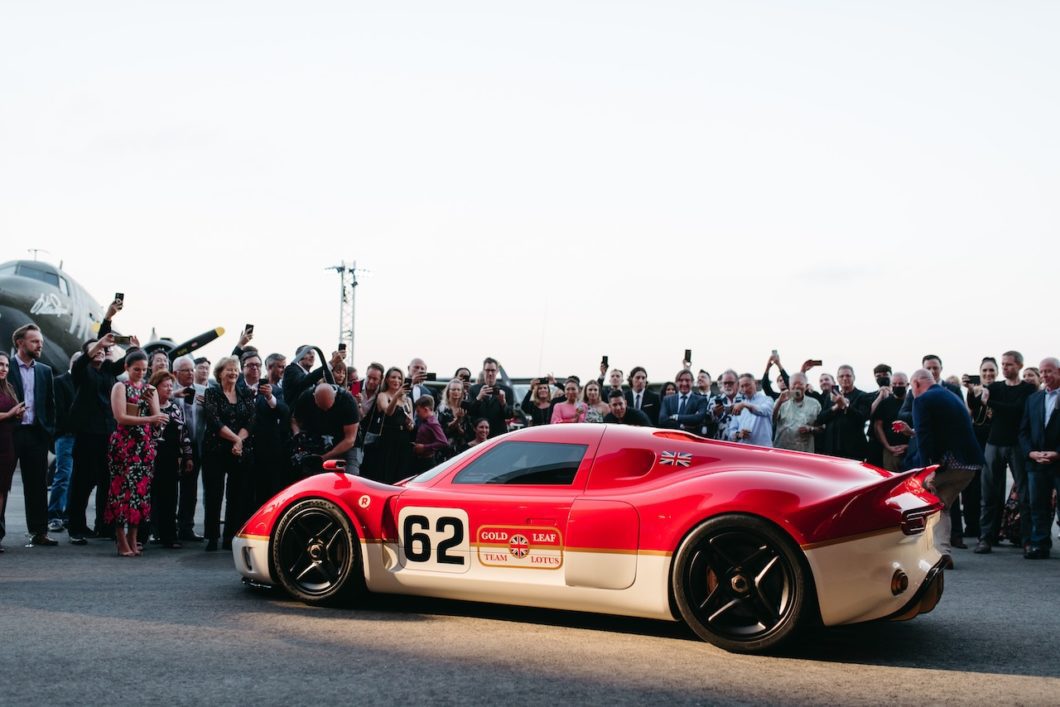 The new Radford Gold Leaf Type 62-2 has made its public debut at Quail Lodge in Monterey California over the weekend. The first images and renders of the new Radford sportscar were released last week, with the reborn British coachbuilding firm choosing the prestigious Californian automotive extravaganza as the location for the very first public reveal of its Gold Leaf livery car.

The Gold Leaf Type 62-2 ‘Quail Edition’ is the most extreme version of the Gold Leaf liveried car. It is the first time it has been seen in public, and it sits alongside the ‘Classic’ version, which provides subtle design cues to the original Type 62 Lotus car.

The Quail Edition wears a modern twist on the iconic Gold Leaf livery, which is one of the most famous and significant racing car liveries ever to grace a Formula 1 car. Its legendary red, white and gold colour scheme was applied after Colin Chapman signed a huge deal with Gold Leaf, and is most well-known on the Type 49B raced Graham Hill raced during the 1968 season. The colour scheme also featured on the famous Lotus 72 F1 car raced by Emerson Fittipaldi and Jochen Rindt in the 1970 season.

Commenting on the first public unveiling of the new car, Mark Stubbs said: “The Radford Type 62-2 in Gold Leaf guise, is a really special car. From a design perspective, the Gold Leaf car with these bespoke additions really stands out, with larger diffusers, and wheels. And sporting one of the most iconic racing liveries ever to grace a Formula 1 car, gives the car a real presence and sense of occasion. We’re only making 12 of these iconic cars, meaning they are already one of the rarest cars that money can buy. And most of them are already allocated to their owners.”

The design of the Gold Leaf Quail Edition is a demonstration of Radford’s modern coachbuilding capabilities. In every area of the bodywork the car is more extreme than the standard Gold Leaf car. At the front, the splitter is more pronounced, providing a race car stance, while at the rear, the diffuser is again more extreme, extending further out for increased aerodynamic downforce.

Also attending the launch was project co-founder Ant Anstead, who added: “The Gold Leaf Type 62-2 that we’re showing at Quail is at the more extreme end of Type 62-2s that money can buy. It is low, sleek and powerful and sports one of the most iconic racing liveries ever created – one of the liveries that the heroes of Formula 1 such as Emerson Fittipaldi and Graham Hill used to race with, in the cars that started my passion for cars.”

“The Gold Leaf Type 62-2 is light, fast and nimble and will hold its own among even the most accomplished of supercars. Naturally, it is also embellished with all of the high-end touches you would expect of a bespoke coachbuilder such as Radford.”

The new Radford is the result of a technical partnership with Lotus, taking inspiration from the revered 1960’s Lotus Type 62. The newly launched mid-engine two-seater coupé has already met with great success with over half of the 62 build slots already filled by eager customers.

The public premiere of the Gold Leaf car at the Quail is the first time the elegant lines of this ultra-exclusive version of the Type 62-2 exterior have been shown, and the luxurious interior will be revealed at a future date. The car’s design has been led by automotive designer Mark Stubbs, who has taken the project from a sketch to the production-ready car revealed today.

Stubbs’ design for the Type 62-2 evokes the spirit of Lotus and the original Type 62 as a homage to the marque’s illustrious motorsport history. With support from Radford’s engineers, former FIA Formula One World Champion Jenson Button has fine-honed the dynamic response of the Type 62-2 to ensure a superlative driving experience.