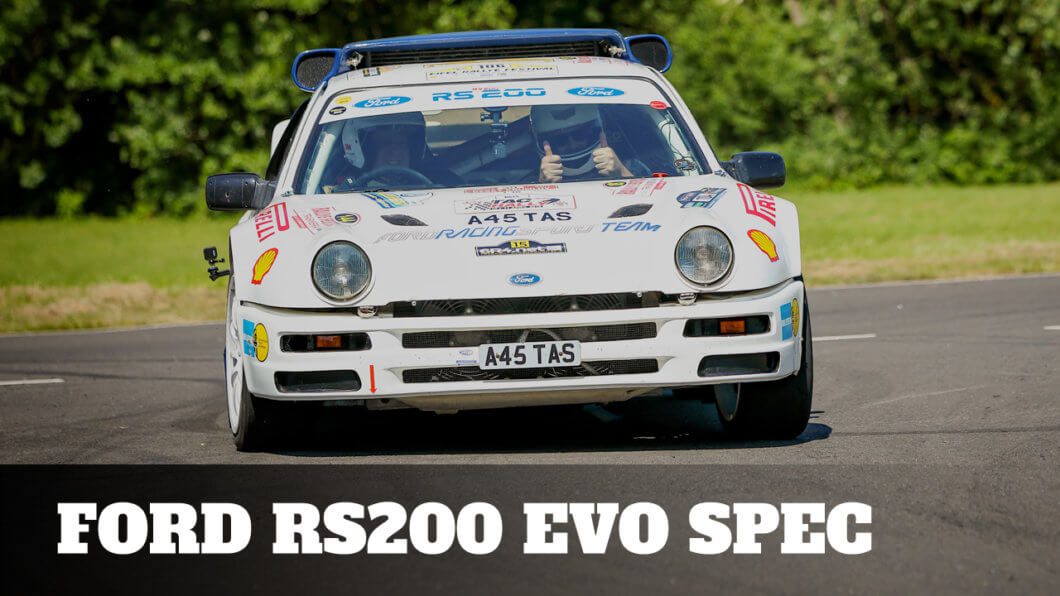 The Ford RS200 is a rally car that needs no introduction really, especially for fans of the crazy Group Rally days of the 1980s. The RS200 was Ford’s attempt to take on the other manufacturers on the rally stage. With the aging MKIII Escort needing replacing, Ford Motorsport set about designing a new Group B challenger. The end result was the Ford RS200 and I was very lucky to get a passenger ride in one at the 6R4.net track day at Curborough Sprint Course.

Earlier in the day I went out in the Audi Quattro, so I was fascinated to see how the Ford RS200 would compare to it’s four wheel drive rival from the same era. Chatting with owner Nigel, who has owned this RS200+ for 12 years, he said it was currently running around 300BHP. Or a little over that number. So it was roughly 100BHP down on the Audi Quattro. But the RS200 did have an advantage. And that was its mid engine configuration and the use of lightweight plastic fibreglass body panels. So the Ford could just edge the Audi. On paper anyway.

Jumping into the RS200 the first impression was how compact it is inside. Space, especially head room is pretty tight and I was forced to put my helmet on inside the car. Putting it on outside would have made entry impossible.

On the inside the bare and functional interior reminded me that this was a serious rally car. There was no Ghia level trim refinements in this Ford!

When Nigel launched his Ford RS200 off the start, it briefly lit up the rear wheels before the four wheel drive system dug in a catapulted the car forward. The sensation of speed was phenomenal. Thanks to its very low centre of the gravity the RS200 feels planted to the road. A bit like and limpet. Which is exactly how it feels.

The Audi Quattro felt like it was going to tear the place apart, whereas the Ford felt a lot more restrained and smooth. And I have to stress how smooth it was. It actually felt sublime and conveyed that feeling you get when you drive a car with superb poise and balance. It actually felt more driveable and it didn’t assault my senses like the Audi did. But of course they are both very different beasts.

Then there was the noise from the turbocharged 2.1ltr straight four engine. It sang as Nigel accelerated hard on the straights and it pulled like a train out of the corners. The fourwheel drive system just gobbled up the tarmac and the brakes did a good job of slowing the pocket rocket down.

Did I enjoy my ride in the Ford RS200? Hell yes! Would I like to drive one some day? That is also a definite yes! I suppose the real question is would I choose this over the Audi Quattro? Well you see that is a difficult one to answer as both of these cars have very different characteristics. In an ideal world I’d have both. But that would mean buying shares in an petroleum refinery and a tyre manufacturer. Needs must as they say!

Thanks to owner Nigel for the Ford RS200 experience. Thanks to Dan Ellmore and Nicky Lindon for the 6R4.net track day. And thanks to Aspection Photography for the drone footage and on track photos.