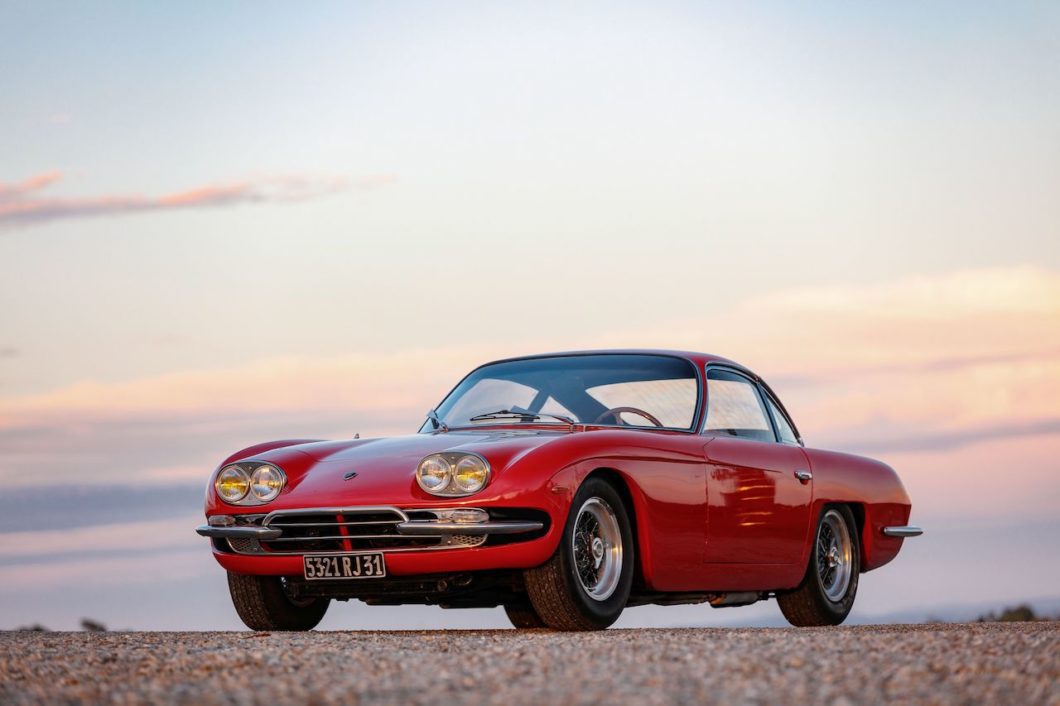 Leading French classic car auctioneers Artcurial are offering a stunning 1967 Lamborghini 400 GT 2+2 at its upcoming sale on the 13th September. Part of the André Trigano Collection, this remarkable Lamborghini 400 GT has had one owner from new and has covered a mere 33,800km. It was purchased new by Mr Trigano himself, which is confirmed by the Polo Storico Lamborghini, the marques certificate of conformity.

The successor to the Franco Scaglione styled 350 GT, the Lamborghini 400 GT 2+2, which was launched in 1966, was the Italian marques second production model. It followed the same luxury focused principles as the 350 GT, with refinements and improvements that further enhanced the appeal of the Lamborghini GT.

At its heart was the mighty 4.0 litre 320BHP V12 engine designed by none other than Giotto Bizzarrini, which was mated to a chassis crafted by Gian Paolo Dallara, with assistance from Paolo Stanzani and test driver Bob Wallace. Such great names signify the intent of Feruccio Lamborghini to establish his still new automobile business and it was the success of the 400 GT that laid the foundations for the celebrated Italian marque.

This particular 1967 Lamborghini 400 GT 2+2 was dispatched to Parisian dealer Paris Monceau on the 23rd November 1967. It was ordered in red Amaranth with a mustard leather interior and included options such as a tinted windscreen and a rear demister. It was purchased by new by André Trigano to replace his Lamborghini 350 GT. It is stated he made the decision to upgrade to the 400 GT as soon as he heard the new model had the option of 2 rear seats. No doubt the idea of a practical 2+2 continent crossing GT was a deal breaker for many buyers in the 1960s.

Trigano’s 400 GT is said to be in remarkably well preserved condition. It has been the subject of a repaint in red, but retains its original interior which is described as being flawless. With the clock reading just 33,745 km, the condition of the interior reflects the GT’s amazingly low mileage. That translates to just over 20,968 miles, which works out at a mere 395 miles per year since 1967. To say the mighty V12 is barely run in is an understatement!

Given the rarity the Lamborghini 400 GT (just 247 examples were built between 1966 and 1968) the fact that this is a one owner car from new with such low mileage is pretty much exceptional, making it highly sought after for the discerning collector. With the market tending the favour the iconic Miura, the 400 GT tends to live in the shadow of its successor.

While this is understandable given the impact the Miura had on the the supercar market, the significance of the 400 GT should not be discounted. It hails from a very different era and is a far cry from the supercar/hyper car approach taken by later Lamborghini models. Ferruccio Lamborghini’s intention was to create the ultimate gentleman’s GT, with an emphasis on luxury and effortless performance. This something he achieved with the 400 GT having laid the foundations with the debut 350 GT. The Carrozzeria Touring styled coachwork is simply beautiful and very much holds its own against the often lauded Miura.

The Lamborghini 400 GT is a model that rarely comes to market and to find one with just a single documented owner and with such low mileage, is very hard to repeat. It is clear that André Trigano adored this car and the fact it has been with him for over 50 years signifies that. With an estimate of between €400,000 – €600,000 this 1967 Lamborghini 400 GT 2+2 is bound to attract significant interest and bids when it crosses the virtual block.

More details on the Lamborghini 400 GT can be found on the Artcurial website.