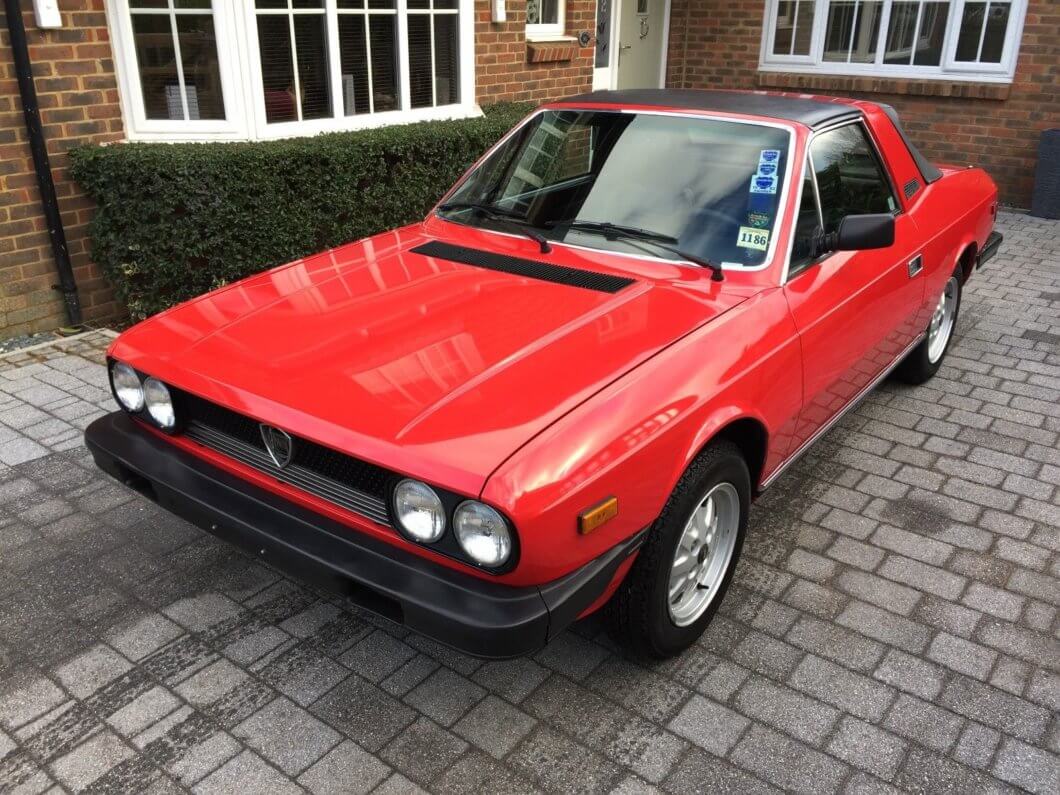 Of all the Fiat/Lancia models from the late 1970s and early 1980s, there is one car that stands out and get us Italian car fanatics all excited. And that is the Lancia Beta Spyder Zagato. It may come as no surprise then that this weeks Market Pick Monday is a close relation to my Bertone x1/9. So you can see where the influence has come from.

Now mentioning the name Lancia Beta to anyone in the UK usually returns the following response…. “Rust!” Indeed it has long been commented that the one car that killed off Lancia in the UK in the 1980s was the Beta. Such was the models apparent rust woes that the whole saga turned into a marketing and PR disaster for Lancia UK. And this was at a time when their rivals, both foreign and domestic were doing a pretty darn good job of rusting away themselves.

Nowadays hindsight and the mists of nostalgia have allowed us to see the beleaguered Lancia Beta for what it was. And that was a cleverly engineered car with an ingenious independent rear suspension and lively double overhead cam engines. The mid engine Montecarlo Coupe and the front engine Beta Spyder brought style and sporting pedigree to the Beta model lineup. And they both looked darned good too! Built from 1973 until 1984, the Lancia Beta Spyder itself was styled by Pininfarina but was actually built by Zagato. In fact all 9,390 Spyders were built by Zagato.

The Lancia Beta Spyder for this Market Pick is a 1981 LHD car that is said to be a one owner car with just 29,300 miles on the clock. It is described as being all original and includes such items as the jack, tools, spare wheel, tonneau covers, original service book and manual. The seller notes that the underside is as good as the top and that the car is supplied with a new service and a years MOT. It is also UK registered. The seller also provides additional photos in the listing which is always nice to see.

What attracted me to this Beta Spyder, apart from it being a Beta Spyder, is that it looks seriously mint. If the photos are to believed, this is one of the cleanest and tidiest Lancia Beta Spyder’s I have seen for some time. Everything from the paint to the wheels and the trim looks clean and sharp with no visible marks. It sure presents itself very well and has clearly been looked after.

The interior is particularly impressive with the seats and carpets looking very fresh indeed. The targa top roof and the rear hood also look sharp. One could suggest that the rear hood looks almost as good as new!

As the window stickers suggest, this car is an American import and appears to have spent some of its life in and around North Carolina. Other details like the handbooks and the fact that this is a fuel injected Lancia Beta Spyder, confirm that this is an American market Lancia. Only the US received the 120BHP 2.0ltr fuel injected Aurelio Lampredi designed engine, with everyone else getting the carburettor version. Indeed the car was referred to as the Spyder Zagato in the US, to help differentiate it from the Alfa Romeo Spider.

Moving onto the mechanicals, the compact transversely mounted Fiat engine also looks very clean with no visible rust in the shock towers or around the scuttle panel/windscreen surround. All of which are noted rust prone areas on the Lancia Beta (and the Fiat x1/9 as well!). Of course a thorough inspection of the body work is recommended. It’s standard procedure when considering any 1980s Italian car!

What I love the most about this Lancia Beta Spyder is its styling. It is a cool and practical 2+2 sports car, a real head turner that is just perfect for summer drives. Plus it has that fantastic Fiat 2.0ltr engine which is both lively and perfectly suited to the Spyder. It is also a very rare sight on UK roads. Which leads me to the price. The asking price of £14,995 is a little on the strong side in my opinion. Especially for a LHD Lancia. But if the condition is to be believed, then this could very well be a rare opportunity to acquire a very original Lancia Beta Spyder. And with a little work I reckon it could become a very nice show car. It sure would look good parked next to my Bertone x1/9!