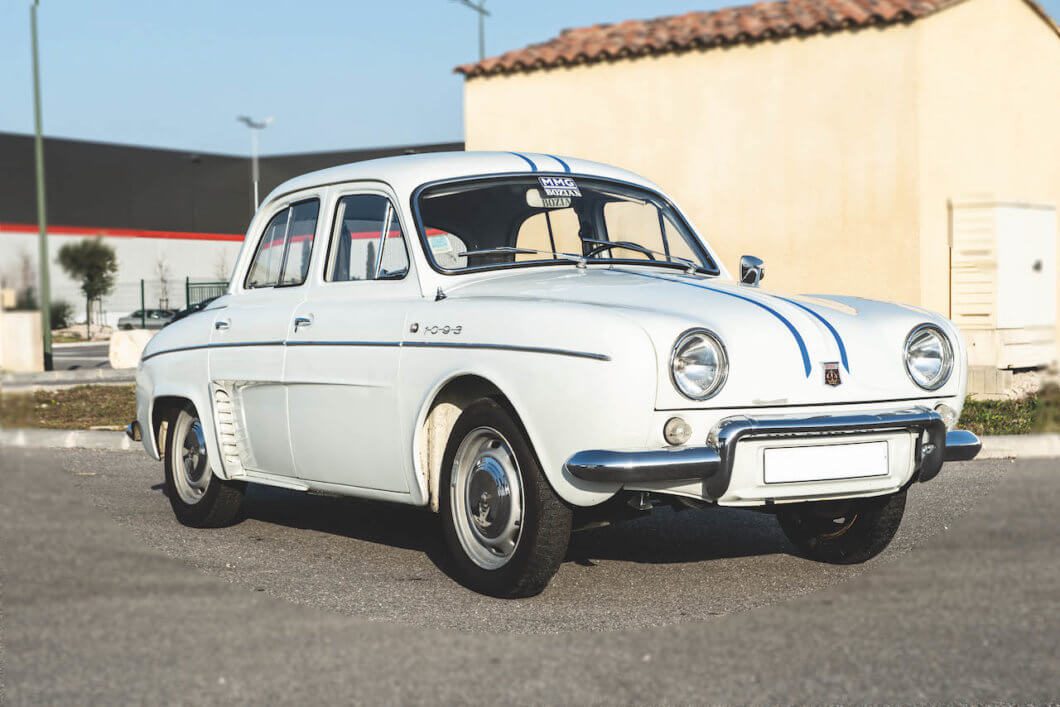 Take to the Road is continuing it’s French themed Market Pick Monday with this stunning 1963 Renault Dauphine. Like the 1966 Renault 8 Gordini that we featured earlier, this Dauphine is also being offered for sale by Leclere Motorcars on the 24th March at the Avignon Motor Festival.

The Renault Dauphine was unveiled in March 1956 and replaced the smaller rear engined 4 CV sedan. While the 4 CV proved a success for the French firm, selling over 500,000 units, the Dauphine would go on to trump that number, selling a staggering 2 million units. It helped lay the foundations for the modern European car industry and proved to be a formidible rally competitor, despite its modest power.

One particularly efficient race prepared Renault Dauphine won the Monte-Carlo rally in 1958 in the general classification with the crew Monraisse / Ferret. As a result of the cars success, Renault decided to approve a special version, matching the characteristics of the rally car. This became known as the Renault Dauphine 1093. One of the Dauphine 1093’s most successful victories was in the 1962 Tour de Corse, with Orsini and Canonicci driving their car to victory.

Available only in white Réjane (Valentine 305) with two blue stripes in the center of the bodywork, the 1093 had many specific modifications over the standard family sedan. It featured a special Gordini tuned motor which pushed power to 55 hp. Other upgrades included a 12 volt battery, Jaeger counters, Autobleu exhaust manifold, Cibié 180 mm headlights, a firmer suspension, a Ferodo reinforced clutch and a four-speed box (borrowed from Renault Florida). And on the inside the dashboard of the 1963 models was finished in black.

This 1963 Renault Dauphine 1093 belongs to rally driver Jean-Pierre Nicolas, former director of Peugeot Sport. He was part of the famed “musketeers” with Jean-Luc Thérier and Jean-Claude Andruet, who won the first World Rally Constructors’ Championship with Alpine in 1973 (and who drove the 1969 Alpine A110 featured here on Take to the Road).

This very rare Dauphine is an authentic 1093 example and was maintained in the workshops of Multi Motion Garage, directed by Julien Nicolas, the son of Jean-Pierre. The car is described as being impeccable in all its aspects, mechanically sound and an ideal addition to any historic rally.

While the Renault 8 was seen as a progression of the popular 3 box design philosophy of the period, the Renault Dauphine is a much prettier car, with softer lines and more gracious curves. This very rare 1093 looks stunning in white with the distinctive and subtle blue strip hinting at its special identity. And with a connection to the famous French musketeers of rally, this 1093 has incredible provenance, which is going to be very hard to replicate.

Like the Renault 8 Gordini, the Renault Dauphine is another French classic that would certainly make it into Take to the Road’s dream automotive garage.