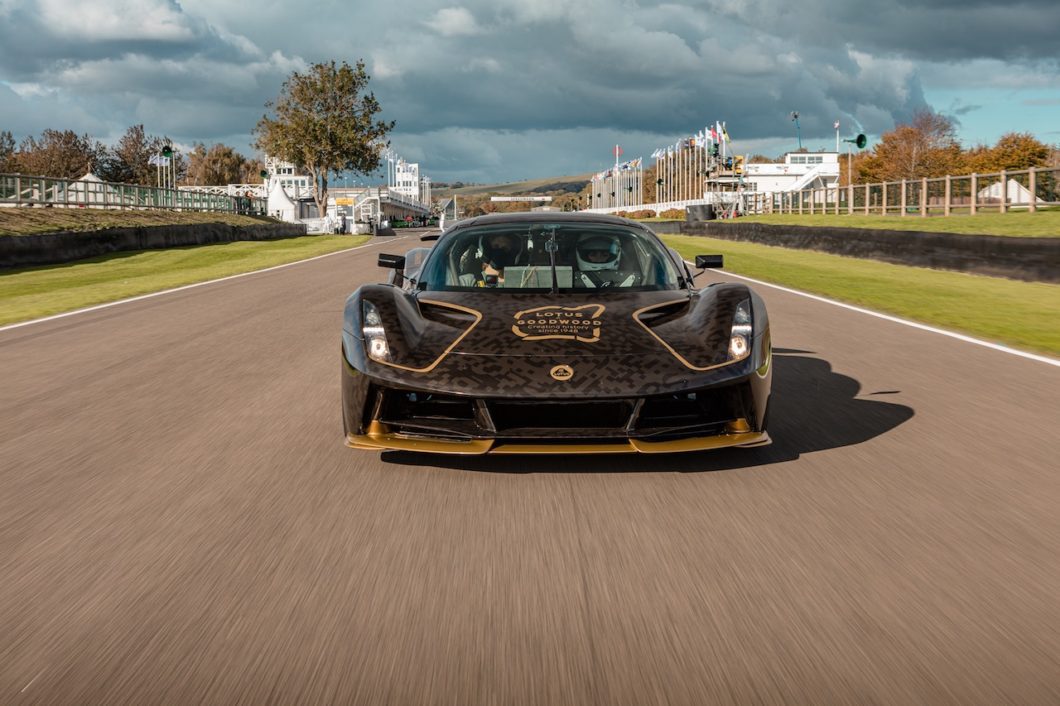 At the recent Goodwood SpeedWeek the Lotus Evija made its live dynamic debut in a highly distinctive colour scheme, the black and gold recalling iconic Lotus liveries of the past. The car also featured a stylised image of the famous West Sussex circuit, accompanied by the words ‘Lotus x Goodwood: Creating history since 1948’.

The names of Lotus and Goodwood race circuit are part of the very fabric of British motorsport, their stories intertwined since each came into existence in that very year. Lotus founder Colin Chapman himself raced at the West Sussex track in the very early days of both, and together they have been making motoring history ever since.

For example, not many people know that Lotus’ first F1 win was at Goodwood in 1960. Most remember the celebrated victory by Stirling Moss in a Rob Walker Team Lotus 18 in the Monaco Grand Prix on 29 May that same year. But on 18 April – six weeks earlier – driver Innes Ireland, in a Team Lotus Type 18, beat Stirling Moss in a Cooper in the Glover Trophy, a race under F1 regulations at Goodwood. It wasn’t part of the Grand Prix calendar, but the result was a forceful statement of intent about what was to come from Lotus and it echoed around the motorsport world.

Fast-forward five years to 1965 and Lotus had truly made its mark on international motorsport, with an F1 world championship, an Indy500 victory and class wins at Le Mans. And on 19 April 1965 Lotus driver Jim Clark set a new lap record at the Goodwood circuit in a Lotus 25. The time was 1:20.4, equalled later the same day by Jackie Stewart. The Goodwood Road Racing Club still acknowledges this as the definitive circuit record – even though modern cars have gone much faster – as it was done during a formal motorsport meeting rather than in a festival or other track activity.

Goodwood closed as a premier motorsport circuit in 1966, still the early years of Lotus’ top level motorsport domination. But almost three decades later, in 1993, when the Duke of Richmond began the Festival of Speed, time had not dimmed the link between Lotus and Goodwood. Countless Lotus cars have attended in the years since; through the Festival, Revival, Members’ Meeting or this year’s SpeedWeek, Lotus has always been part of the grid.

Memories of the Goodwood Festival of Speed include Lotus F1 World Champion Emerson Fittipaldi offering to drive Colin Chapman’s widow, Hazel, up the Goodwood Hill in the late Nineties in an Elise Type 72 Black and Gold Special Edition. Mrs Chapman stated quite forcefully, “Now, you won’t drive too fast, will you!” Those who were there will never forget seeing Emerson drive close to flat-out up with Mrs Chapman in the passenger seat trying to keep her elegant hairstyle in place! Afterwards Emerson asked if she had shut her eyes, to which she replied ‘Only once, at the start, and I did not open them until after the finish.”

Lotus has been the ‘Featured Marque’ twice at the Festival of Speed, in 2002 and 2012. At the latter, such was the excitement of Lotus taking centre stage that on the media launch day – held on a sunny but cold March day – it felt like a bigger event than the first Festival.

Come the 2012 Festival itself, Lotus was the theme of the famous Goodwood sculpture, and artist Gerry Judah created an infinity loop in the form of a race track with a line-up of the actual Lotus F1 cars mounted as though racing. It’s remembered as one of Judah’s finest Goodwood installations.

That same year saw numerous famous drivers reunited with their cars – Stirling Moss and John Surtees each with a Lotus 18; Emerson Fittipaldi in a Lotus 72; Jackie Oliver in a Lotus 49; and Doc Bundy in a Lotus Esprit X180R.

In other years guest drivers have celebrated Lotus legends, including Jackie Stewart and the Duke of Richmond in the then-recently restored Jim Clark Lotus Type 38, the car which Clark had won the 1965 Indy500. Bruno Senna is remembered for driving his uncle Ayrton’s Lotus 97T, and multi-Le Mans winner Tom Kristensen has roared up the Hill in a near-identical one.

At the Goodwood Revival Lotus has won the blue riband event, the prestigious Glover Trophy, more times than any other marque. Many motorsport commentators will readily explain that this is due to the fact that the Lotus 25 was the quickest car in the early 1960s, so is still the quickest today against competitors of that era. This explanation, however, ignores the fact that the tremendous performances of these Team Lotus cars is down to the impeccable preparation – often by Classic Team Lotus – and the brilliant racecraft of the drivers. These include Andy Middlehurst, who has won the Glover Trophy more times than anyone else.

It is not just the Lotus race cars that have set Goodwood alight – the road cars have also created memorable moments. The stand-out would be the world debut of the 3-Eleven in 2015, which drew such a crowd that surrounding marques had to limit fans clambering on to their stands just to get a better view of the Lotus!

It was also a Lotus road car which took centre stage at this year’s Goodwood SpeedWeek – the Evija all-electric hypercar making its televised dynamic debut.

Like all brands with a genuine motorsport heritage, everyone at Lotus is looking forward to next year’s Goodwood calendar and the prospect of three exciting festivals. Whatever happens, Lotus will be there, making history as always.