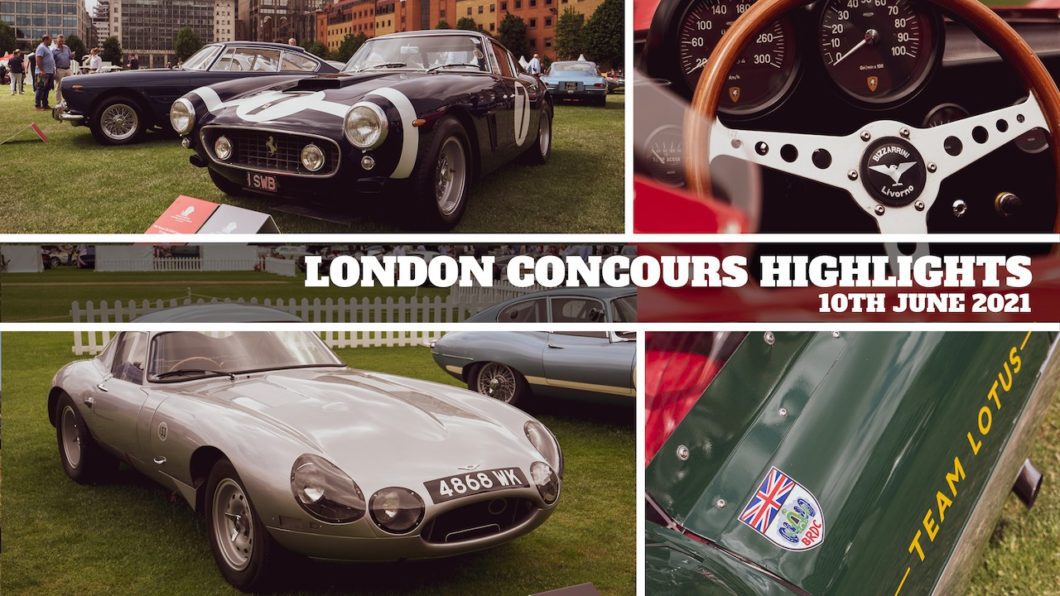 The London Concours returned in style to the grounds of the Honorable Artillery Company Headquarters in central London. The spectacular event, which took place from Tuesday 8th – Thursday 10th June, saw the addition of a new third day to the schedule. It was a huge success with over 7,500 guests attending the sell out concours and Take to the Road attended on the final “Super Car”, to soak up the sun and the glitch and glamour of the capitals finest classic car show.

This years event had a very different feel to last years London Concours, with the crowds noticeably more upbeat thanks to the recent easing of COVID restrictions. The glorious sunshine also played its part, with the show enjoying what was probably its warmest ever event, with temperatures reaching highs of 25 degrees in the capital.

The hot temperatures set the tone for the three days, such was the quality of the classic collector cars and supercars on display. The selection of cars that graced the well manicured lawns was top notch as always with more than enough gems to satisfy even the most discerning enthusiast.

A grand total of 100 cars were on display a the five acre site, with eleven classes competing for individual category prizes and of course “Best in Show”. This years main concours event classes included the ‘200MPH Club, ‘Young Timers, ‘Great Marques – Porsche, ‘Great Marques – Lotus’ and ‘The Italian Berlinettas’. Each of the classes were packed with wonderful rarities, from the Ferrari 250 SWB/Comptezione Sefac Hot Rod to the Bugatti Chiron and the Jaguar XJR15.

The selection of cars chosen for the honour of displaying at the HAC was mouthwatering, but as ever there could only be one ‘Best in Show’. That prize went to the fantastically well-preserved Lotus Eleven LM50. This particular Lotus Eleven is chassis no. 11-332 and was a Team Lotus works entry, which raced at Rouen and Reims in 1957. It was driven by American Herbert Mackay-Fraser, who was more commonly known as ‘Mac’ Fraser.

Sadly Frazer became the first Lotus works driver to lose his life, when he fatally crashed at Reims in 1957. The Eleven LM150 was later sold to Carroll Shelby Sports Cars, and was raced in many US events by Jim Hall, later of Chaparral Cars fame. It returned to the UK in the 1970s and was restored in 2006.

Since then the Lotus has competed in many historic race events and in the 2017 it took home the Goodwood Revival Madgwick Cup. With such incredible heritage the Lotus Eleven LM50 was a very worthy winner of the London Concours 2021 ‘Best in Show’ and it will now have the honour at displaying at the Concours of Elegance at Hampton Court later this year.

Another notable winner was the sharp suited 1969 Maserati Ghibli, which faced some stiff competition in the Italian Berlinettas class to take home the top prize in its category. Finished in a gorgeous blue, the Ghibli is one of Maserati’s finest ever creations.

Continuing the charge from the Italians was the iconic 1991 Ferrari F40, which took home the top prize in the special and rather exclusive “200MPH Club” category. The owner even brought along a super rare F40 fitted luggage set, which was itself worthy of a prize.

There was also success at this years London Concours for one of the most beautiful British sportscars ever created, the sumptuous AC Ace. This particular example, which was built in 1961, was on display in the “Lost Marques” class and it was a well chosen winner.

Another timeless classic that was well chosen by the Concours Judges was the beautiful 1955 Porsche 356 Carrera Coupe, which was on display in the Great Marques – Porsche class. This particular example is a super rare RHD 1500 GS Carrera Coupe, one of 10 built and this was actually the very first one!

Following the success of the first ever Hot Rod display at last years event, the organisers continuied with the custom car theme which a special “Kustom Class“, which was won by a super cool 1941 Ford Coupe.

Making its global debut at London Concours 2021 was the impressive Everrati Porsche 911, which was unveiled at Joe Macari last month. The electric Porsche is a sublime example of bespoke, high end re-engineering of an old school 964 911. And it caused quite a stir at the show, especially when it wafted in silence past the “200MPH Club” display.

Other displays of note was the impressive Jaguar E-type selection, which was gathered specially to mark the 60th anniversary of the worlds most beautiful sportscar. One standout was the famous Lindner Nocker Low Drag E-type, which was brought along by Girardo and Co.

Another absolute gem that on show in the HAC grounds was the one and only Toyota 2000 GT. Quite arguably one of the finest Japanese sportscars ever created, the 2000 GT drew a lot of attention and deserved a prize for being the only example driving on UK roads.

Special mention also goes to the legendary Italian marque Bizzarrini, which announced its return earlier this year. The legacy of the engineering genius Giotto Bizzarrini, the manufacturer is back and it brought along two wonderful examples of Bizzarrini design. One was a stunning  original 5300 GT Strada and the other a Lamborghini V12 powered P538 race car.

Always a rare sight at car shows, it was a great moment to see these two very special cars on display and to also to see the famous Bizzarrini name live on once again. The firm is expecting to launch its new Revival series of 24 hand built cars in 2022.

Commenting on the success of the show, Andrew Evans, London Concours director, said: “As the sun set on the third day of London Concours, it was great to reflect on what I think was a very successful event. Supercar Day was a real highlight, with 50 of the finest supercars from Drivers Union adding to the already fantastic line up of rare and collectable vehicles at the Honourable Artillery Club. I’d like to extend thanks to all of our partners for making the London Concours a success, and I look forward to welcoming everyone again at the Concourse of Elegance in September, and back to the HAC next June.”