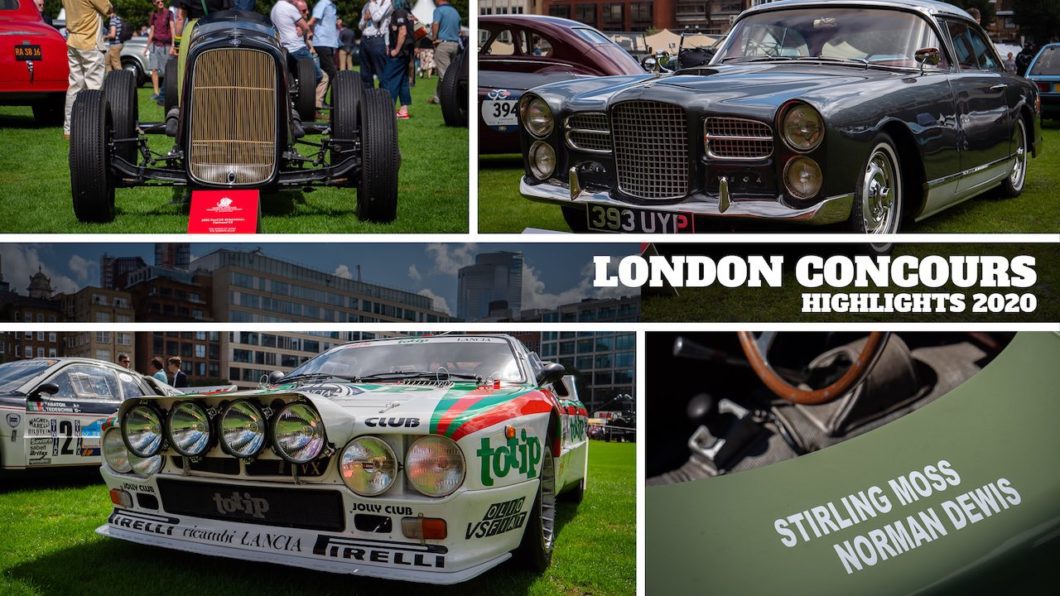 London Concours 2020, the warm up event for the Concours of Elegance, made a welcome return to the capital on Wednesday 19th and Thursday 20th of August. Originally scheduled for June, the event was postponed due to COVID restrictions on public events. Fortunately these restrictions were lifted which allowed the organisers to re-schedule and press on with hosting the capitals finest classic car show.

Once again the lineup of cars on display was a testament to the quality of the two day event, with rare and highly collectable motors gracing the lawns of the Honorable Artillery Company. Despite an unfortunately wet day on Wednesday, the weather improved on Thursday, with glorious sunshine welcoming visitors to the event.

Of course this years London Concours was different to previous years, with social distancing measures in place to ensure guests safety. For many visitors and even owners of cars on display, it was their first classic car show to attend this year, making it a slightly surreal moment. What was certain however was that everyone who attended, especially the orgnaisers, were delighted that the show went ahead. Even more delighted were the lucky owners whose classic drove away with the top concours prizes.

Speaking of prizes there was some notable winners at this years London Concours. The Best of Show award went to the stunning 1967 Ferrari 330GTS Spider. It also won its group class, “Convertibles: The Golden Era”, making it a very successful event for the Ferrari Spider. This example was originally displayed at the Torino Motor Show in 1967, before being sold to a US buyer in 1969.

Previously restored to a concours level, this Ferrari 330GTS is no stranger to concours wins, taking home the Best in Class and a Platinum Award at the Ferrari Owners’ Club National Concours in 2019.

There was further success for Italian marques with YouTuber and Gentleman farmer Harry Metcalfe’s 1970 Lamborghini Espada winning the “Great Marques: Lamborghini” class. This particular Espada is probably the most well known example on YouTube, thanks to Harry’s hugely popular motoring channel.

It recently received a complete engine rebuild to Miura SV specification, which was installed only a couple of weeks ago… just in the nick of time for the show!

Another notable winner at this years London Concours was the fabulous 1961 Facel Vega HK500, which took home the top prize in the “Lost Marques” category. Finished in a stunning dark grey with a light silver roof and a contrasting red interior, this fine example of French luxurious motoring was imported to the UK in 2016. Since importing it the current owner has restored the car while maintaining as much originality as possible.

The event also continued with its strong Italian theme with a wonderful selection of Lancia’s through the ages. Such was the calibre on show, it was probably the most significant collection of Lancia’s ever gathered for a UK concours event.

There was also a very familiar sight on the lawns of this years event, with the 1966 Unipower GT, the very car that Take to the Road featured earlier this year, enjoying its moment in the sun. Unfortunately for owner Tim there was no class prize for his plucky GT, but he was delighted to get the opportunity to showcase Chassis No 1 at one of the UKs finest concours events.

And guests at the show were very fortunate to get the chance to see the UK’s only road going Unipower GT, making it as rare as many of the other marques on display over the two days.

With that it is time to bring Take to the Road’s highlights of the London Concours 2020 to a close. The sun may have set on this years event and who knows what the future holds with so much uncertainty on the horizon. With that in mind it is worth congratulating the organisers for staging such a successful event in such challenging circumstances. Here’s to London Concours 2021!