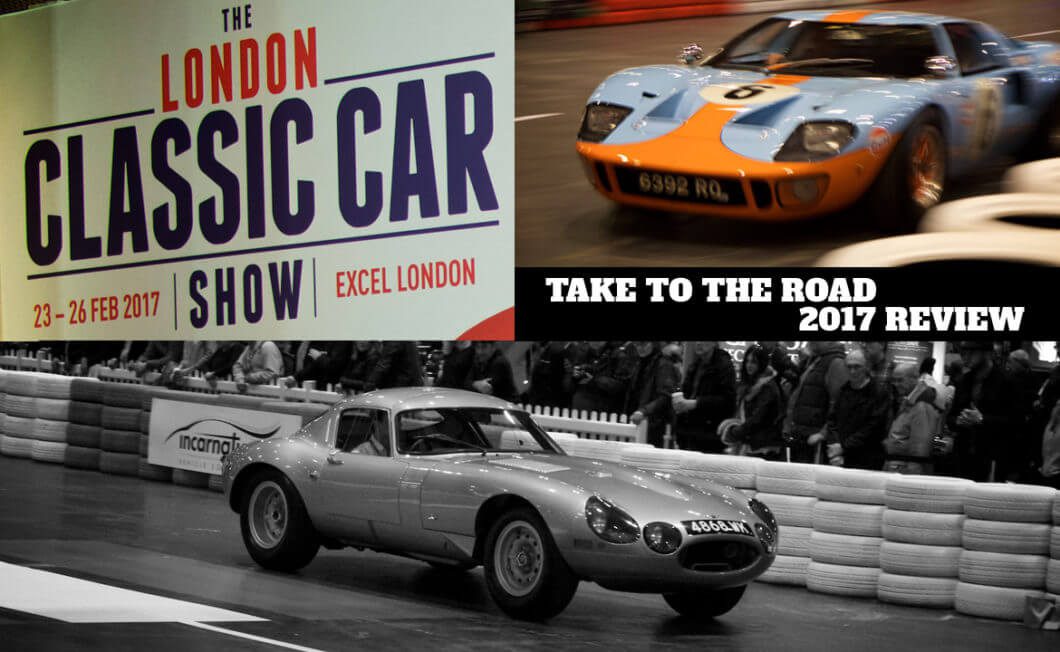 The dust has settled on another London Classic Car Show at the ExCel Exhibition Centre. It is hard to believe that only a few days ago I was surrounded by some of the finest collections of classic cars in the whole of the UK… even Europe. There was everything from a brash Ford GT40 to a compact Goggomobil. Over 37,000 people descended on the ExCel over the 4 day event, an increase of 11% on the shows 2016 visitor numbers. So what did Take to the Road this of this years show? Read on to find out more in London Classic Car Show Review 2017.

One of the first things that will hit first time visitors to the ExCel is the sheer size of the building. It is vast and its central corridor appears to stretch off far into the distance. Visitors to this years show were treated to an even bigger display thanks to the addition of the new Historic Motorsport International, an even longer Grand Parade in the main hall and the addition of a special auction lead by Coys of Kensington. And the positioning of a rather splendid Ferrari 365 GTB/4 Daytona in the main corridor was a taste of what was to come inside.

I’ve been to the London Classic Car Show for the past two years, each time attending just one day. This time I decided to spend two days at the show, as I felt it was the best way to truly appreciate the classic cars on display. It is very easy to run around a show like this and glance at everything and then leave. But by doing this you miss the special cars and their details. And sometimes its nice to just stop at a stand and just chat about the cars on display.

Of course a show of this standard gives visitors a chance to blag a photo with some motoring celebrities. I was lucky enough to bump into Edd China of Wheeler Dealers and he kindly obliged a quick photo. Which was very good of him.

I also spotted Le Mans racing legend Jackie Icyx after his talk though I didn’t get a chance to have my photo taken with him. Still though it was nice to see the six time Le Mans winner.

With the celeb spotting over, it was time to get down to business. This time around I was fortunate enough to obtain press access to the event, which meant I was able to get into the show early on the Thursday and the Friday. This was a wise move as I was able to wander round the displays and enjoy the cars without having to fight my way through large crowds of people. Having been to the 2015 and 2016 shows (each time on a Saturday), I realised how busy it can get and if you want to take as many photos as possible, with as little interference as possible, the only way to do so is to try and get in as early as possible!

The London Classic Car Show is of course all about the cars and visitors really were spoilt for choice. The entire collection in both halls was valued at a staggering £500m with the Ferrari Tribute Collection provided by Ferrari specialist Joe Macari, estimated to have been worth a conservative £150m. This gives you an idea of the caliber of classics on display.

Last year my favourite car of the show was the iconic Alfa Romeo Tipo 33 Stradale. This time round the choice was made just a little bit harder thanks to the vast range of rare delights on offer. First of all there was the Ferrari Tribute Collection. With 21 greats of the prancing horse stable on display, there was everything from a Ferrari 288 GTO, Ferrari F40 to a Ferrari 365 GTB/4 Daytona Spyder. But the stars for me were the legendary Ferrari 250 GTO and the Ferrari 375 MM racer. Both were built to race… the GTO being the most beautiful of all Ferrari racer cars… and the 375 MM was a fascinating slice of the early days of Scudiera Ferrari. It was a car with character and detail in abundance. It is little wonder I spent quite a bit of time just looking at it. (More photos of the Ferrari Tribute Collection can be found here)

Moving on there were other delights such as the 1955 Mercedes 300 SLR “Silver Arrow” and a Fiat Abarth 1500 Corso. I could go on… there were so many great cars that would fill any enthusiasts garage. But for me the real star of the show was the incredible 1952 Alfa Romeo 1900 Sprint. Yes I have chosen an Alfa as my favourite show car two years in a row. And yes I have a thing for classic Alfa’s. But this car spoke to me. The coachwork by Touring of Milan was just exquisite and the whole car oused both charm and class. It really was a beautiful Alfa Romeo Sprint, a tru GT that hails from an era when the Italian marque consistently produced beautiful cars. So there we have it, Take to the Road’s star of the show is the 1952 Alfa Romeo 1900 Sprint.

As always, the Grand Parade was the highlight of the London Classic Car Show. Being able to see so many iconic cars in action inside the ExCel… it is just superb entertainment for the crowds. And I have the say the decision to run the track the full length of the venue was a very good move. In 2015 it was too short. In 2016 the parade stretch was lengthened and for 2017, they got it just right! It really was a visual and audible treat!

So that is a wrap for the Take to the Road London Classic Car Show Review 2017. I’m sad that it is over for another year but there is always 2018 to look forward too. I hope you enjoyed my photos from the show. Let me know which is your favourite in the comments section below.