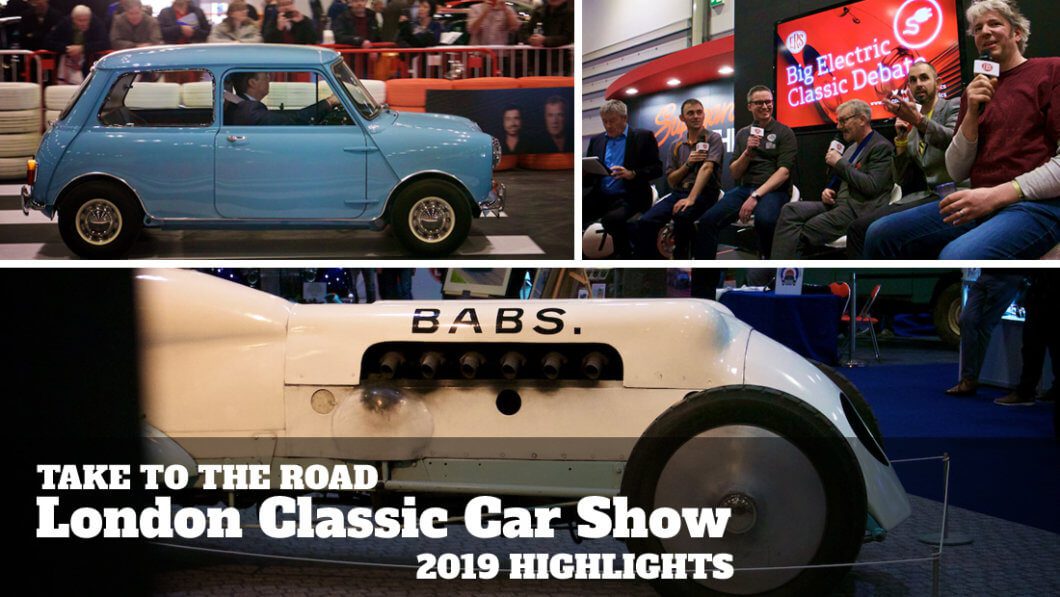 The dust has settled on another London Classic Car Show at the ExCel. Take to the Road had the pleasure of spending two days at the show, courtesy of event sponsors ERS. And what a great show it was.

As is always a case when you step into a car show of this caliber, the big question is “where to start?”. Such was the vastness of the displays, with automotive gems lined up as far as the eye could see and the Grand Parade once again taking centre stage at the heart of the show.

Some of the key stand out displays was the special Aero Engines curated by Edd China. He specially selected some incredible machines that represented the pinnacle of raw engineering. The sound they made was simply glorious. It was impressive to get up close to these historic machines, especially as they rarely appear in public. It was a real treat.

Another standout at the show was the ERS Great Electric Classic Car Debate on the Supagard stand. Take to the Road got a front row seat for this discussion which saw Tiff Needel, Edd China, Jonny Smith and Richard Morgan of Electric Classic Cars (who we featured here on Take to the Road back in 2016) debate the virtues of converting our cherished classics to run on electric. Not everyone in the audience agreed, but the general consensus was that the future for many of our classic cars is electric.

Below is a sneak peak of the rather electric debate highlighting some of the points raised by the panel. Have a watch and see if you agree with their views on where the classic car world is heading. And if you want to have your say head on over to the ERS website to vote.

Also in keeping with the electric theme was our friends of London Electric Cars who brought along their latest conversion project, a classic Land Rover. Who would have thought you’d ever see a rugged old Land Rover ditching it’s diesel engine for a electric motor!

We of course couldn’t forget our friends at the Waterloo Classics Car Club who had another impressive stand at this years show. There was everything from an Austin Allegro SS to a Jaguar XK120 to a rare Alfa Romeo 8C recreation, which for us was one of the stand out cars at the show.

Also wowing the crowds was the 96 Club stand which had the pleasure of displaying a fascinating Ford GT40 with a rather unique history. It isn’t often you can stand in front of a car that is actually a creation of two different racing GT 40s, both of which competed at Le Mans.

Which brings to a close Take to the Roads London Classic Car Show Highlights for 2019. Roll on 2020 at the ExCel!