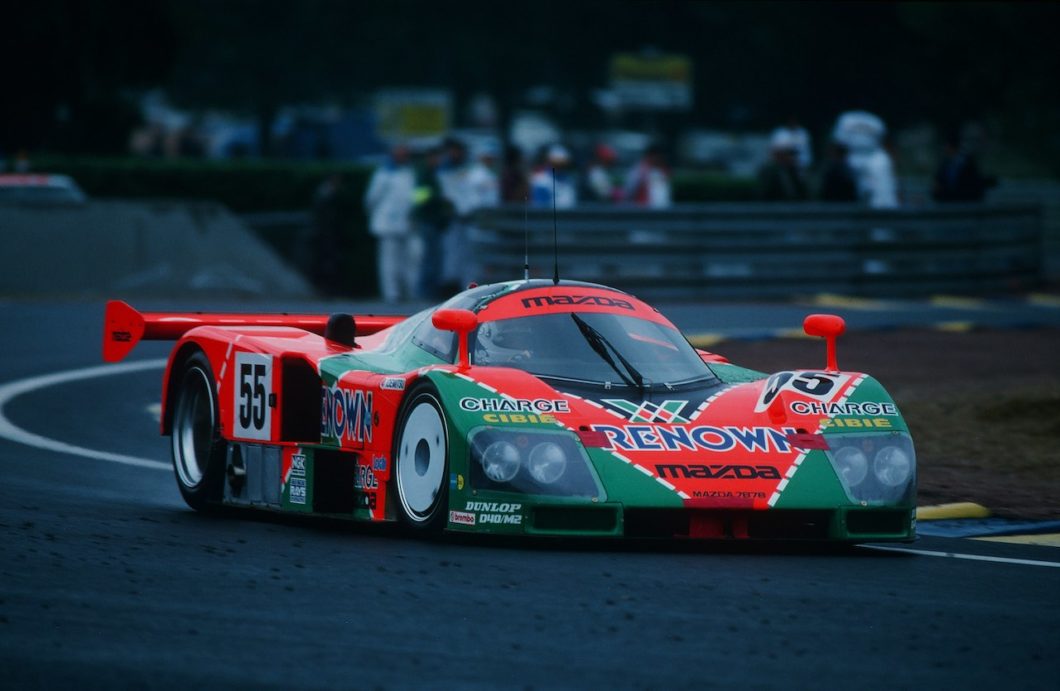 Mazda Motor Corporation has confirmed that its iconic 1991 Le Mans winning Mazda 787B is set to demo at the 2022 Le Mans Classic. This year’s Le Mans Classic takes place from the 30th June to 3rd July, with the Japanese rotary engine legend taking part in demonstration laps at the historic circuit. The ultimate example of Mazda’s ‘Never Stop Challenging’ spirit, the four-rotor Mazda 787B became the first Japanese car to win the 24 Hours of Le Mans when Johnny Herbert, Bertrand Gachot and Volker Weidler took the flag in 1991.

For the first time in almost a decade, spectators at Le Mans will be able to witness the thrilling and distinctive sound of the Mazda 787B’s rotary engine echo around the famous French Circuit as it appears at Le Mans Classic 2022.

The Mazda 787B was due to run at Le Mans Classic last year to mark the 30th anniversary of its victory. Unfortunately, the event itself was postponed due to Covid-19, but now thanks to support from model car company Spark, the 787B will be demonstrated this year by 29-time competitor in the 24 Hours of Le Mans, Yojiro Terada. Dubbed as “Mr Le Mans” in Japan, he will drive the Mazda 787B during demonstration laps* on the 1st and 2nd July.

The hugely popular Le Mans Classic event takes place every two years on the Circuit de la Sarthe, and while the Mazda 787B will take part in demonstration runs, many of its in-period rivals will be in action in a pair of one-hour historic Group C races that form part of this year’s Le Mans Classic line-up. Still a period of sportscar racing loved by fans the world over, the Mazda 787B’s victory in 1991 was the pinnacle of Mazda’s three-decade involvement at Le Mans.

Over the weekend of 22nd and 23rd June 1991, the number 55 Mazda 787B covered 362 laps of the famous French circuit and over the course of its 28 pit stops the winning Mazda had received just one oil top up, a change of brake discs and pads, plus a nose change. Aside from that, the 700bhp four-rotor R26B powered 787B just required fuel and tyres as it faultlessly proved the reliability, efficiency and performance of Mazda’s unique rotary engine technology.

Sharing the winning car with British F1 star Herbert were fellow Formula One drivers Volker Weidler and Bertrand Gachot, and for this trio of young chargers it was a largely uneventful race.

A strong start saw Weidler make places from the 787B’s 23rd place on the grid and by 6pm number 55 was into the top ten. By the halfway point of the race at 4am the Mazda’s pace and reliability meant it was running in third place, and with three hours to go, the Mazda was in second place when the leading Mercedes-Benz suffered engine troubles and retired.

This left the number 55 Mazda 787B to click off the laps and cross the line to take overall victory for Japan in a race that Toyota and Nissan had tried and failed to win throughout the Group C era. Yet it was the relatively small manufacturer from Hiroshima and its rotary engine that had taken the first outright win at Le Mans for a Japanese brand.

Even more poignantly, Mazda already knew the rotary engine would be banned from Le Mans in 1992, so the 1991 victory was the last chance to win with a rotary. With a chassis designed by Briton Nigel Stroud, the Mazda 787B was also the first car to win Le Mans with carbon brakes. To top off a great race, the sister number 18 Mazda 787B finished in sixth with the older number 56 Mazda 787, with Yojiro Terada on the driving team, in eighth – a huge achievement for Mazda and culmination of a story at Le Mans that began 21 years earlier.

Helped by the bold livery of Japanese clothing sponsor Renown, the Le Mans winning number 55 Mazda 787B has become one of the most famous Le Mans winners. Immediately retired from competition after the race, Mazda 787B chassis 002 now takes pride of place at Mazda’s recently updated museum in Hiroshima. Maintained in full working order it still captures the hearts of car fans the world over when it’s demonstrated and the 2022 Le Mans Classic is a rare opportunity for fans in Europe to see it in action.