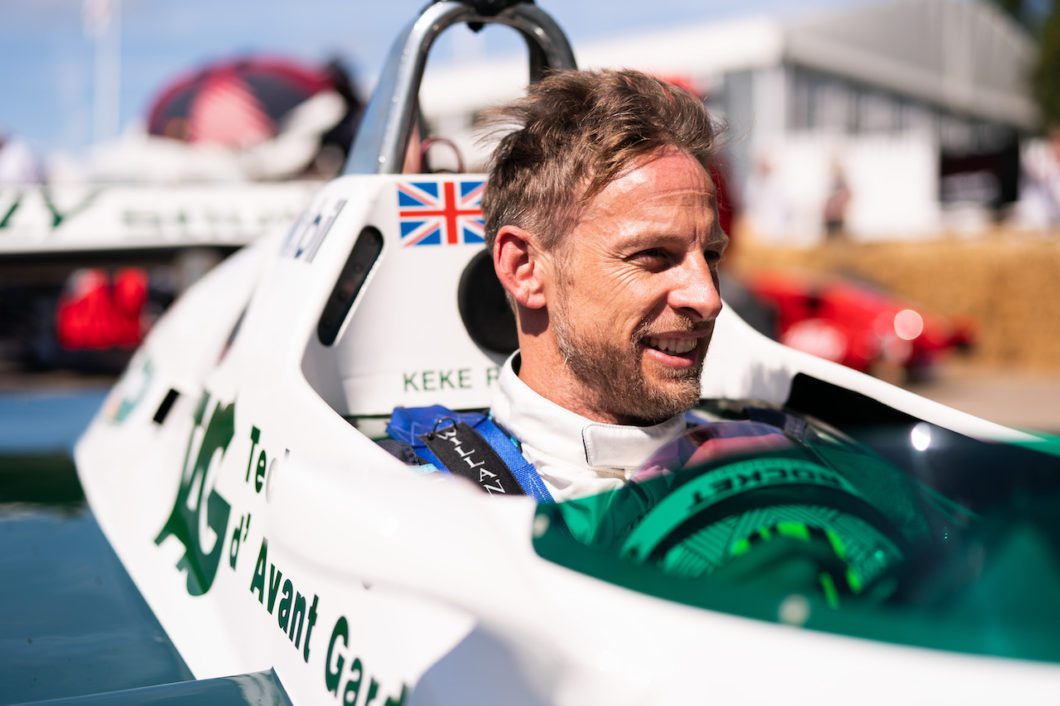 On the Friday evening of the Revival weekend, Button will take part in the Stirling Moss Memorial Trophy. Formerly known as the Kinrara Trophy, the sunset race which was first held in 2016, will see Ferrari 250 SWBs take on the likes of Aston Martin DB4GTs, AC Cobras and a host of early-60s GT racers. Button will be sharing the driving seat with Alex Buncombe as they race in a Jaguar E-type, which is being run by RJN Motorsport.

Button was last seen in action at the Goodwood Festival of Speed earlier this year, when he got behind the wheel of Keke Rosberg’s 1982 Williams-Cosworth FW08. This time he’s be swapping a demonstration drive for the excitement of an adrenaline fueled race around the historic Goodwood Motor Circuit.

The dynamic duo will be back in action on Sunday afternoon in the Royal Automobile Club TT Celebration, one of the most prestigious races in all of historic motorsport. The one-hour, two-driver event, will see the finest closed-cockpit cars go head-to-head, with Button and Buncombe competing in their 1963 AC Cobra. Originally a factory-prepared racer for Shelby American, the car is now race prepped and run by DK Engineering.

The race starts at 2.30pm and will form part of ITV1’s live broadcast of the Goodwood Revival on Sunday 19 September.

After the cancellation of last years Goodwood Revival, ticket goers and racing drivers alike will be looking forward to a weekend full of nostalgia and historic motorsport action. Already confirmed for this years event is the Goodwood Revival Victory Parade which will honour local key workers and personnel.

2021 also marks 70 years since the Festival of Britain and the foundation of the National Hot Rod Association. To celebrate the occasion, Goodwood will be recreating a slice of that festival atmosphere at Gate 2 of the Motor Circuit.

Goodwood will also be marking 70 years since Wally Parks founded the National Hot Rod Association in America. One of the largest ever gatherings in Europe are set to gather at Goodwood with Hot Rod owners bringing one car for every year of the NHRA’s age. This iconic slice of Americana will be celebrated at a relocated Gasoline Alley which will feature bleachers, a mock drag strip, performance stage and dancing.

Goodwood will also be reviving the Festival of Britain Trophy which first made an appearance at the Whitsun meeting at the Goodwood Motor Circuit in 1951, which was inspired by the events that took place on London’s South Bank and across the UK in that year. Fast forward to 2021, the Goodwood Trophy has been renamed to celebrate 70 years since the Festival of Britain and will be contested by some of the finest Grand Prix and Voiturette cars of the 1930s and ‘40s, recapturing the derring-do atmosphere of inter-war racing as English Racing Automobiles take on the likes of Maseratis, Alfa Romeos and Talbots.

More details of the confirmed Revival Race Schedule are available here on the Goodwood website, with further driver details due to be announced in the coming weeks.