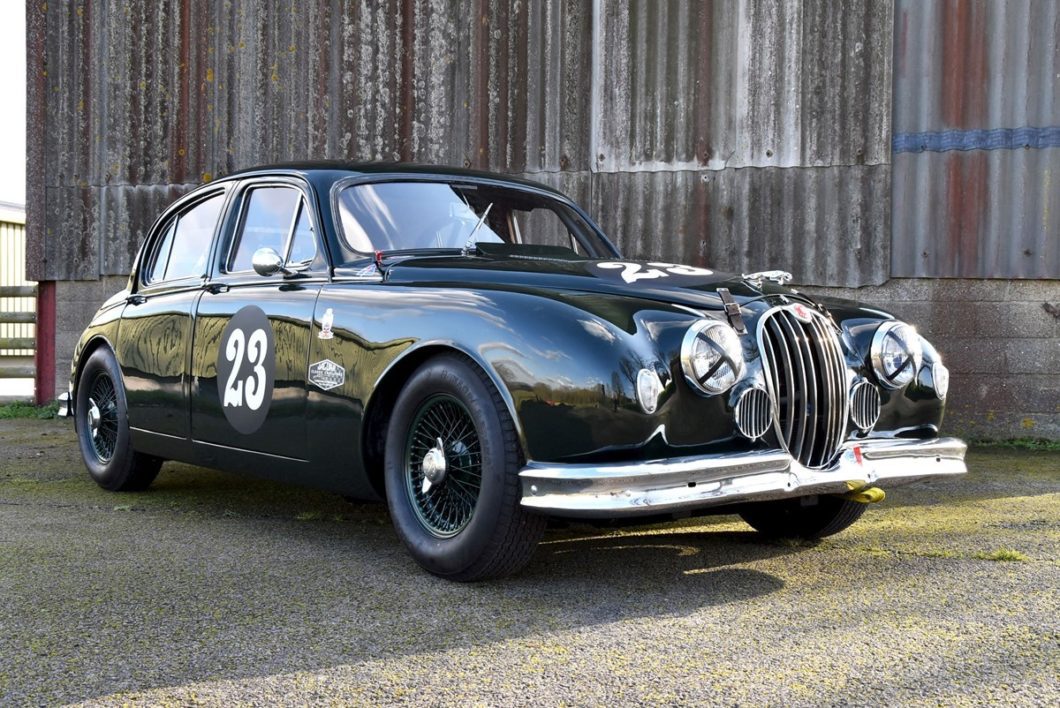 Historic motorsport specialist, DM Historics, is offering a fully FIA-qualified example of one of the most iconic Jaguars ever built, the Mk1 saloon. This 1959 Jaguar Mk1 comes complete with a fantastic racing heritage, that includes it being driven by British Saloon Car Champion Win Percy.

The iconic ‘Mk1’ Jaguar spearheaded the British company’s foray into the small luxury car market, running in production between 1955-1959.  This particular Mk1 is a stunning late ‘50s example with a proven competitive track record in prestigious motoring events.

First prepared for the track in the 90’s by its owner at the time, it was treated to a full race conversion enabling it to compete at the highest competitive level on the historic racing scene.

The story of this vehicle gets truly special under the ownership of historic driver Leo Voyazides. In partnership with Win Percy – British Saloon Car Championship winner in 1980, 81 and 82 – this Mk1 was driven to pole position at the 2002 Goodwood Revival.

Win Percy’s legacy continued beyond his pole in 2002, after close friend, Leo Voyazides, launched a fundraising campaign for Percy following a tragic medical error left him unable to walk in 2003. Voyazides with the help of HRDC Founder, Julius Thurgood, launched the ‘Top Hat Win Percy Fund’, raising enough money to custom fit the Mk1 with hand controls, allowing the Saloon car champion to get back on the track at the 2004 Goodwood Revival.

Purchased by an avid historic racing enthusiast in 2014, the car was recommissioned to full racing standards, removing the previously installed hand controls and undertaking a full race engine rebuild to further increase its competitiveness on the track, the Mk1 has performed admirably at Jaguar Heritage Challenge events across Europe.

Rebuilt by Rob Beere, the 3.4L engine is capable of producing up to 300 bhp and when paired with its straight cut close-ratio gearbox, competition clutch and uprated braking system, delivers maximum performance and exceptional handling.

Finished in a classic British Racing Green the Mk1 remains in a highly presentable condition for a well-tracked veteran. A combination of the Mk1’s classic finish with the exterior brightwork creates a deep and eye-catching shine, making it hard to miss on the track.

In accordance with FIA regulations, the Corbeau racing seat is pinned in by a Sparco 6-point harness. Completing the interior and giving a fantastic Green over Red look, is a heritage correct Red trim and period-correct wood veneered dash and fascia.

Complete with FIA racing papers valid until 2026, it has been expertly engineered specifically with historic racing in mind, appearing at countless Jaguar and Touring car events across Europe and the UK, offering eligibility to such events as Goodwood Revival, Le Mans Classic, Spa Six Hours and other HRDC & HSCC historic challenges.

This FIA prepared Jaguar Mk1 is ready to hit the track once again and is now for sale with DM Historics with an asking price of £85,000. More information about the 1959 Jaguar Mk1 can be found on the DM Historics website.