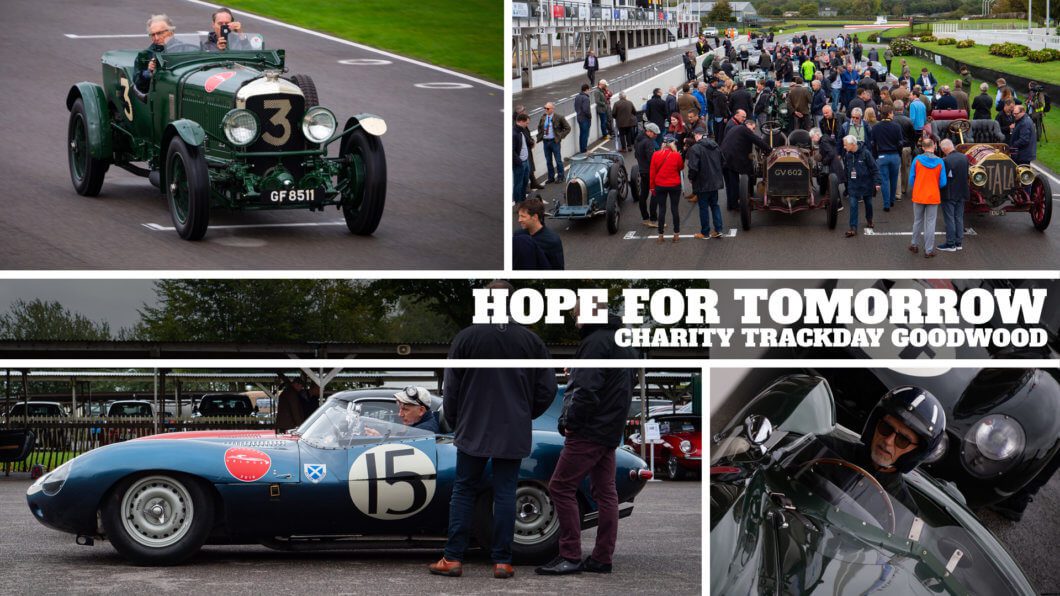 Legendary racing drivers from the world of F1 and major motorsport descended on the historic Goodwood Motor Circuit on Wednesday 25th September for a very special track day event organised by Veloce, all in the aid of cancer charity Hope for Tomorrow and the Halow Project. Take to the Road was there to take in the action on what was a superb day of charity racing.

Now in it’s third year, the Veloce Trackday is the brainchild of Peter Neumark the Chairman of Classic Motor Cars Ltd, who has supported numerous charities over recent years and who is a lifelong classic car and motorsport enthusiast.

The weather on the day threatened to ruin the spectacle for drivers, their passengers and spectators. However the wet autumnal conditions did little to dampened the spirits in the paddock as the cars and their A list drivers made their way to Goodwood’s iconic grid.

The Veloce Track Day kicked off on the Wednesday morning with a relaxed gathering of cars and their drivers in the paddock, before making their way to the grid for a photoshoot followed by a brisk warm up lap around the track.

With the pleasantries complete the drivers took the cars out for a warmup lap before returning to the pits and collecting their paying passengers for their opportunity of a life time lap of Goodwood.

With their passengers all aboard the cars headed to the track for two laps before coming back into the pits to collect their next batch of paying passengers. The sight and sound of these fabulous machines as they roared out of the pit lane and around the circuit was just sublime.

While drivers and their cars were restricted to a 70MPH speed limit on the track, it was easy to tell it was a fun and breathtaking experience for their passengers, who enjoyed a view rarely experienced by many on the famous Goodwood tarmac. The car driven by Derek Bell was the 1930 Bentley Speed Six “Old No 3”, a famous historic Bentley, which was on display at this years Concours Elegance at Hampton Court Palace, as part of the Bentley Centenary celebrations.

Commenting on the growing popularity of the Veloce Track Day, Peter Neumark said: “This is certainly the track day of the year with famous drivers, driving legendary cars, to raise money for deserving charities. What could be better?”

Claire Cosgrove, Head of Fundraising and Communications, Hope for Tomorrow said: “Veloce really is the Greatest Track Day on Earth and Hope for Tomorrow, it’s racing driver patrons and supporters are thrilled to be involved. This fundraising day will go a long way towards keeping the wheels turning on our Mobile Cancer Care Units.  Our thanks go to Peter and the people at V Management”.

Even as the mist and rain descended for the final few hours of the track day, the buzz in the pit lane was mighty, fueled by coffee and the smell of petrol and legendary race cars. It really was a superb day of racing and all for a good cause as by the end of the day, over £100,000 had been raised! For more information on the important work carried out by the Hope for Tomorrow Charity, head on over to their website.

Additional Photos from the Hope for Tomorrow Goodwood Veloce Trackday