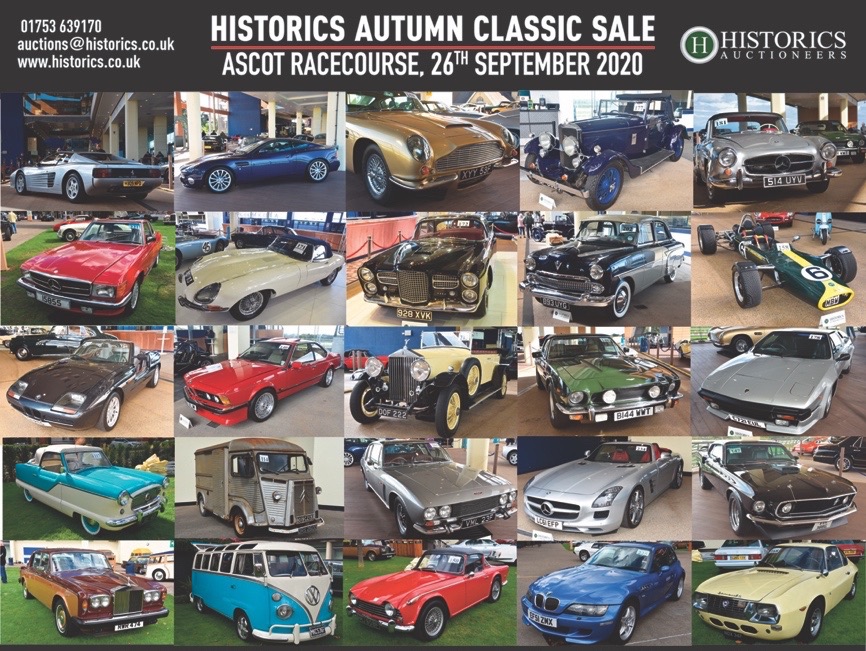 Classic car auctioneers Historics enjoyed a very successful sale on Saturday 26th September, raking in an impressive £4.47m and achieving a sale rate of 80%. Over 186 classics were on offer with a total of 149 sold. The headline sales from the weekend were the 1989 Mercedes 300 SL Roadster and the 1956 Vauxhall Cresta E, both of which sold for what is believed to be world record sums.

The socially distanced 3 day event at Ascot racecourse attracted over 750 visitors, with the auction day itself attended by over 900 people. Reflecting the current times we live in, many punters took to the internet to attend the auction, with a total of 72 lots sold to online bidders, which accounted for approximately 50% of total sales.

There was a fantastic selection of entries on offer at the Historics September sale, with some significant motors on offer. These included Lot 208, the 1987 Peugeot 205 GTi 1.9 that was once owned by the late Sir Stirling Moss.

Delivered new to the British racing legend, the 205 GTi hot hatch was Stirling’s everyday driver, which he also used to tow his motorbike. Personal touches such as the tow bar fitted by Sir Stirling and the BRDC sticker on the back windscreen, plus a letter from his son Elliot remembering the car when it was new, added to the cars wonderful history file.

It is little wonder then that the Peugeot 205 GTi soared past its original estimate of £13,000 – £16,000, selling for an impressive £20,160. No doubt the new owner will be delighted with owning Sir Stirling’s former daily driver.

Also catching the bidders eye was Lot 163, an impressive 1975 Maserati Merak. With just 2,136 miles on the clock, the Italian sports car is probably one of the lowest mile examples in the country. Having had only two owners from new, the Merak was described as being in time warp condition, which is pretty much as close to factory fresh as one can now get for a 45 year old sports car.

Finished in silver with a black interior, the condition of the Merak was impressive. It was little surprise then that bidding was very strong for the Maserati Merak, which sold for £62,260, comfortably beating its estimate of £53,000 – £60,000.

The cars that grabbed the headlines however were the 1989 Mercedes 300 SL Roadster and the 1956 Vauxhall Cresta E, both of which saw furious bidding from determined buyers.

The 1956 Vauxhall Cresta E presented at the auction is one of just 840 produced in that year. This example was described by Historics as an obsession for the owner, who embarked on a substantial two year restoration of the car. Such was the vendors love for the Vauxhall, the cost of restoration was estimated at being in the region of £50,000.

This example was originally dispatched to New Zealand and despite hailing from a more favourable climate than the UK, the Cresta still required substantial work, with the vendor determined to return to car to as new condition. This resulted in one of the finest examples of a Cresta E currently on the road in the UK. And with just 4 Cresta’s currently taxed and 3 on SORN, the chances of bumping into another on the open road will be few and far between.

Historics rounded off its impressive weekend with Lot 221, a 1989 Mercedes 300 SL Roadster. Prices have been steadily climbing for the venerable Mercedes convertible, but the final price achieved for this example was incredible. So what made this SL so special?

For starters it had just 10,393 miles on the clock, making it one of the lowest mile examples on the market. Originally sold to its first owner who lived in Jersey, the Mercedes never left the island which accounts for the remarkable low mileage. The car eventually made its way over to Guernsey and was then subsequently imported into the UK.

Finished in red with a mushroom leather interior, this one owner Mercedes 300 SL Roadster was supplied with a hardtop which was never removed from the car. As a result the convertible hood was never used and remains in as new condition. Other details such as an unused original spare wheel and an unopened first aid kit still in its cellophane packaging, demonstrated the originality of the car.

It clearly struck a cord with buyers with the Mercedes 300 SL Roadster selling for a stunning £70,184, blowing its estimate of £25,000 – £30,000 completely out of the water. With low miles and low owners, the opportunity to acquire an SL that is almost factory fresh was too good an opportunity to miss. And this record price will certainly set a benchmark for future Mercedes 300 SL Roadster sales.

A full round up of all the results from the September sale can be found on the Historics website.

Historics is now consigning for its Winter Sale which is due to take place on Saturday, 28th November.

Historics Heads to Europe for the first time

After its successful sale Historics also announced their first ever international auction. The ‘Historics Monaco Classique Sale’ will be staged on Friday 23rd April 2021, at the Principality’s spectacular Chapiteau de l’Espace Fontvieille. Over 100 fine classic motor cars will be presented for sale in front of an international audience, in-hall and online. The Monaco sale will be in addition to Historics’ well-established UK auction schedule.