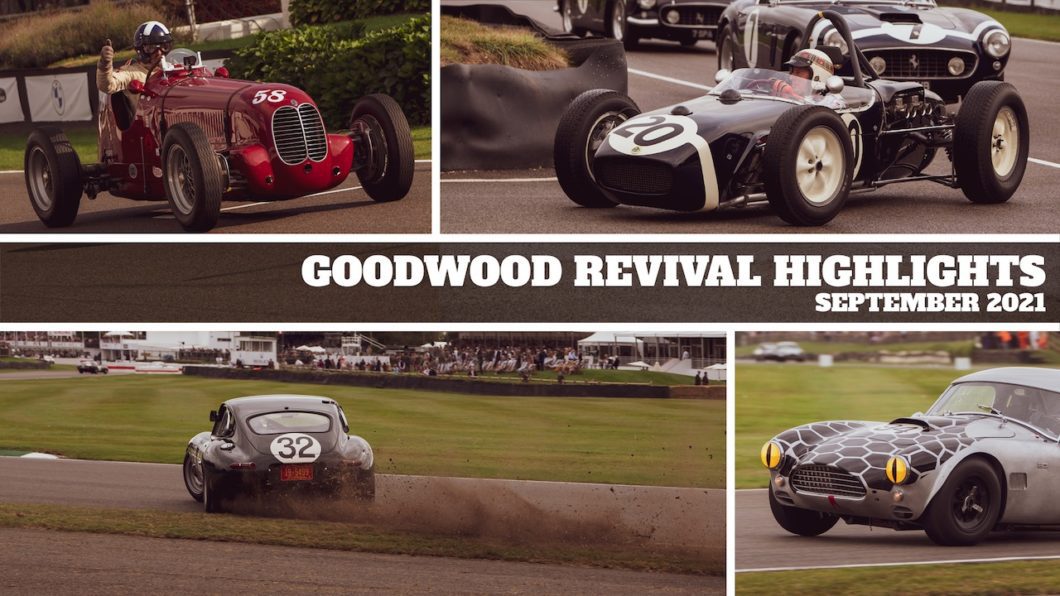 Historic Motorsport made a glorious return at the Goodwood Revival 2021, which took place last weekend. It seemed like a eternity since the last event was held in 2019, with the hallowed grounds once again filled with the buzz of excited spectators, eager to put on their vintage outfits and soak up some good old fashioned nostalgia.

The atmosphere for the 78th Revival was carnival like with the glorious late summer weather basking the circuit in warm sunshine. At times it was baking hot which would have challenged both drivers and their cars as they fought for Goodwood glory. There was a slight blip on the Sunday morning when heavy rain showers threatened to spoil the party. It certainly made for greasy conditions out on the track, but the weather improved for the final afternoon and fans were rewarded with a wonderful spectacle of competitive racing, which brought about more than a few thrills and spills.

Take to the Road attended this years Revival on both Saturday and Sunday and the experience was thoroughly satisfying. While the Goodwood Speedweek made up for no Revival in 2020, the lack of crowds meant the atmosphere was not quite the same. Fast forward to last weekend and the legendary Goodwood Revival fun was back in style, with thousands of fans packing the grandstands and all along the circuit.

Walking through the crowds you could sense the tremendous joy and relief from spectators who were delighted to be back at Goodwood. It was smiles all round and the atmosphere was positively electric. And rising above the hustle and bustle of the crowds was the roar of race engines as they charged down the main straight. The Revival was back!

The first race on the Saturday morning was the Festival of Britain Trophy, a 25 minutes race that featured Grand Prix and Voiturette cars from 1930 – 1951. These historic open wheel racers are always a firm favourite at Goodwood, with a host of ERA, Maserati and Talbot-Lago’s in action. The sight of these rare cars from the golden era of Grand Prix racing broadsiding their way round corners is always a delight to behold, their drivers requiring a healthy mix of skill and bravery to push these machines to the limit.

The serious racing took a back seat for a short while later that morning as the mighty little J40 pedal cars took over the main straight for one of the most adoring races of the entire weekend. A whole troop of budding little racing drivers lined up with their parents and “team owners” in a recreation of Le Mans style sprint racing starts of old. Kids of all ages raced a colourful selection of the Austin J40 pedal cars across the finish line. Some 32,000 of these were built between 1949 and 1971 and they have become a stand out feature of the Revival since the race was introduced in 2012.

Around the grounds of the circuit, it was a hive of activity as mechanics worked feverishly on cars, moved them round the paddocks and fed the thirsty engines, while entrants soaked up the nostalgic and perfectly period themed automotive atmosphere.

One of the highlights of the weekend was the very poignant and wonderful celebration of the life of the late Sir Stirling Moss. Held on each of the three days, the parade brought together an amazing collection of 60 cars, all of which were either raced or owned by the legend himself. It was a moving tribute and his wife Lady Susie Moss was present in the famous 1955 Mille Miglia winning Mercedes-Benz 300 SLR.

Thankfully the morning rain had cleared in time for the third and final parade to honour the Wonder Boy of motorsport. Once again a glittering array of Moss era cars took to the grid, along with notable stars such as Ross Brawn who was at the wheel of his Ferrari 250 GT/SWB, the Rob Walker team car that Moss drove to victory at Goodwood in 1961. Sir Jackie Stewart was also on hand to pilot the famous 1961 Monaco winning Lotus 18.

The St Mary’s Trophy, which features saloon cars that raced between 1950 and 1959, always promises to entertain the crowds. With lightweight and plucky entrants like the Austin A40 Farina’s going head to head with substantial saloons like the Jaguar MkVII and the canal boat sized Ford Thunderbird, it is a race of wills, terrier like nimbleness and sheer horsepower.

The 1950s saloon car action returned on the Sunday, with the drivers having to contend with cooler and damp conditions, though by mid afternoon the track had dried up sufficiently to allow for some spirited driving. Victory in race two went to Bill Shepherd in the Ford Thunderbird, with Grant Williams 2nd in the Jaguar Mk1 and 3rd went to Richard Meaden in Alfa Romeo Giulietta Ti.

The Royal Automobile Club TT Celebration race brought God like quantities of horsepower to the Goodwood Circuit and a star studded selection of drivers. Saturday saw the drivers take part in qualifying for the weekends biggest race, which took place on the Sunday afternoon after lunch. The action on the track during qualifying and the race itself was fast, furious and at times fractious as numerous cars came to blows on the Sunday afternoon, as drivers fought for the coveted podium positions.

Victory in the RAC TT Celebration went to Oliver Bryant and Darren Turner in AC Cobra No 1, with Emanuele Pirro and Frederic Wakeman taking 2nd place in the Lister-Jaguar Coupe no 17 and 3rd place went to Shaun Lynn and Andy Priaulx in the AC Cobra Le Mans Coupe No 13.

The RAC TT Celebration race brought to a close a hectic but thoroughly enjoyable two days of motorsport action at the 78th Goodwood Revival for Take to the Road. The Rolex Driver of the weekend was Phil Keen, who was presented with a Rolex Oyster Perpetual 41, as shown below with Sir Jackie Stewart’s helmet from 1966.