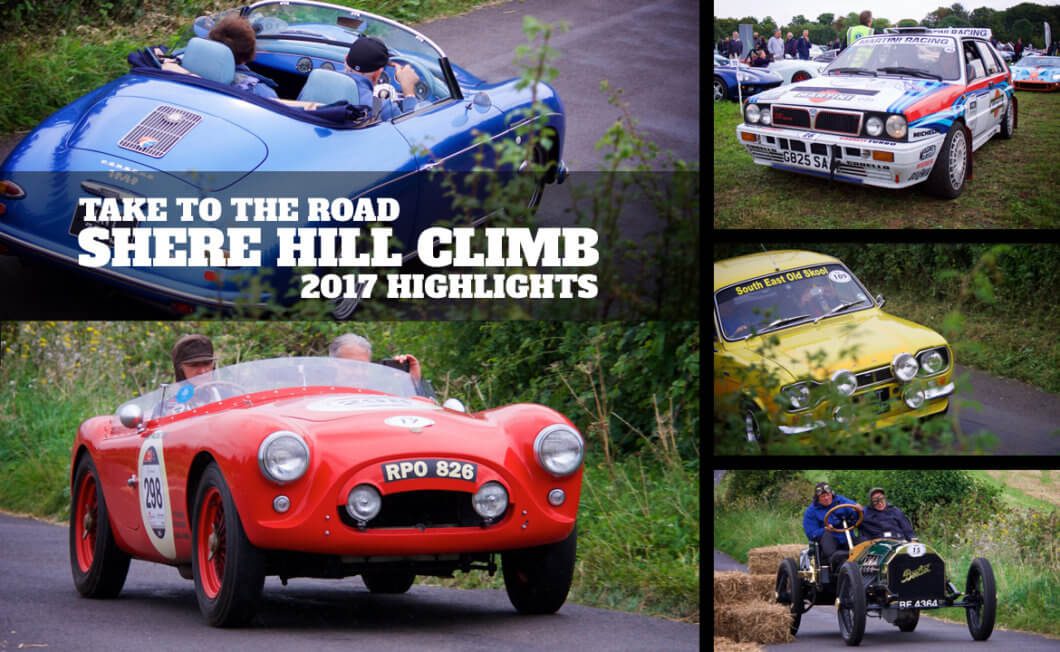 On Sunday 3rd September Take to the Road attended the Shere Hill Climb for the very first time. This hugely popular event first started four years ago and has grown to be come one of the top hill climbs in the south of England. The selection and diversity of the vintage, classic and modern classics taking on the hill climb was impressive to say the least. Everything from pre war cars to Milla Miglia competitors to modern day sports car were in action. And it was quite a spectical! In total an impressive 150 cars were entered for the days action.

After spending two days at the Concours of Elegance at Hampton Court Palace, it was time for a change of pace and scenery. As luck would have it the trip down to Shere Hill Climb, just east of Guildford, was a just a short one. On arrival I was met by a sea of cars and furious activity in a very large field. A large banner with the words “Start” was unfurled across the road, a hint that I was getting close to the action.

There is something to be said for seeing a field in the countryside swapped with classic cars. It was an impressive site with hundreds of vehicles and spectators milling about the main paddock and display area.

A quick walk through the lines of cars revealed an incredibly diverse range of cars, all entered an waiting their turn to attack the hill climb. After taking in the many rows of classic cars, it was time to check out the action at the start line.

Shere Hill Climb itself takes place on Staple Lane, which looks like most country roads. But it is the topography, gradual elevation and its numerous bends that make it an ideal hill climb road. The course is approximately one mile long and has four chicanes, with numerous humps, bumps and blind corners to challenge even the bravest drivers.

Watching the cars line up and wait their turn at the start line, I wished my Bertone x1/9 wasn’t suffering from electrical issues. This course looked a perfect test for the little mid engined rocket. Maybe next year!

The event organisers set up numerous viewing platforms along the course, with additional viewing areas on both side of the road. Peering through gaps in the hedges it was exciting hearing the cars burn off at the start and then crouching, waiting to see what classic blasted around the corner.

What really impressed about this event, in addition to the large numbers of cars taking part, was the running time for the course itself. The Shere Hill Climb is a full on event from 9am to 6pm!

Shere Hill Climb is one of the best hill climb events Take to the Road has attended to date. The scale and the diversity of the cars is brilliant and it is a wonderful day out for any classic car enthusiast. And the great thing is that all the proceeds from the day go to charity! Even though the rain and mist did start to fall, it failed to dampen spirits on the course. Fingers crossed that by this time next year, my Bertone x1/9 will be ready to take on the run itself!

See our Highlights from Motorsport at the Palace 2017