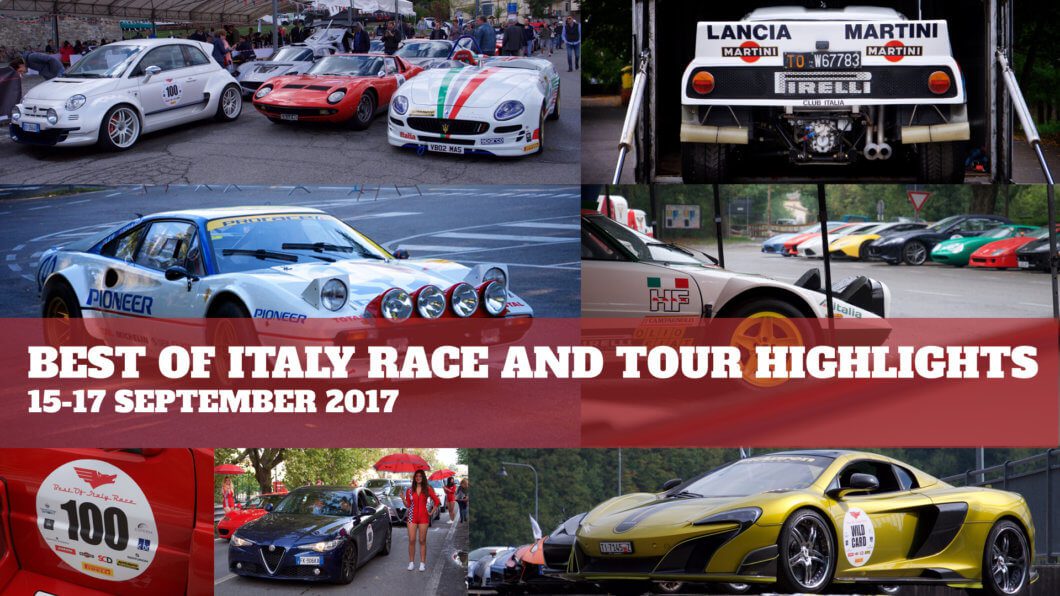 Working in the classic car industry brings with it many benefits. The most important of these is getting to spend quality time with great classic cars. And then there are the events and shows where these old cars really come to life. One such event is the Best of Italy Race and Tour. It is a car event to best all others and one that I was very fortunate to be invited to.

The Best of Italy Race and Tour is based in the small hill top town of Castell’Arquato, in the heart of the province of Emilia Romagna. For those not familiar with the area, head southeast of Milan and then up into the foothills of Val D’Arda. Castell’Arquato is a quaint yet busy little Italian town.

The skyline is dominated by the old and impressive Visconti castle, sitting high about the rest of the town. The narrow, cobbled medieval streets, wonderful piazza and the impressive 8th century Collegiata church all add a sense of grandeur to the spectical that is the Best of Italy Race.

The event itself is set over 3 days. Friday was arrival and registration day, the sleepy little towns slumber awoken to the roars of countless V12, V10, V8 and V6 powered supercars. All descended onto the town in a steady and seemingly endless convoy. It was quite a sight!

The weekends racing began on the Saturday with entrants given the chance to race their rare classics and supercars on the course. The route itself was an impressive 25km run from Castell’Arquato to the town of Morfasso futher up the valley. The public road was closed for each race, meaning drivers could max their cars out and really attack the very channeling, twisty tarmac all the way up to Morfasso.

When the cars started to arrive on the Friday, I was given a taster of what to expect. And the calibre of those entering was exceptional. One of the first cars I spotted in the paddock was David Pipers stunning Ferrari 250 LM. David is the famous racing driver who contributed to the highspeed scenes in one of the greatest racing films of all time, LeMans. He had brought his super rare 250 LM to take part in the race and its presence was a real statement of intent for the Best of Italy Race. You can’t get better than seeing legendary Italian race cars competing on their home turf.

Then things turned up a notch when two large car transporters arrived. As the trucks began to open their trailer doors, race founder and organiser Enzo Scalzo mentioned to me that something very special waited inside. When the doors finally opened I was greeted to a glimpse of racing livery that is one of the most iconic of all time. I saw flashes of Martini and Alitalia. My heart skipped a beat!

Before me were two trailers filled with the Lancia Works Martini cars! One by one the team unloaded iconic car after iconic car. Lancia Delta S4… Lancia Delta Evoluzione HF… Lancia Rally 037… Lancia Beta Montecarlo… Lancia LC1… and the one and only Lancia Stratos! The Best of Italy Race had brought together the very best of the Lancia Martini Works cars. This paddock was officially petrolhead heaven!

Saturday morning saw furious activity as team engineers fine tuned carbs, check tyre pressures and loaded race fuel. The paddock was a buzz of excited banter mixed with rumble of lots of horse power. And as the cars lined up on the start line, I got into position.

The most thrilling aspect of the Best of Italy Race was being able to get so close to the action. Stood there on the start line as the cars roared off into the distance, it was an adrenaline fueled experience. This was street racing, Italian style. One by one the rare classics and supercars launched themselves from the start line, disappearing around the first bend and on towards Morfasso. The noise, the smell… it was just exhilarating.

Sunday morning saw a repeat of Saturday’s action, with spectators treated once again to a fabulous display of smoking tyres and massive horse power. As I stood once again on the start line, watching Joe Macari’s insane Maserati MC12 GT1 deafen everyone (and myself) with its ear piercing roar, I really felt privileged to be witnessing such a special event.

My Italian my not be the best but when it comes to cars, we petrolheads all share a universal language. I had many moments with fellow spectators and race competitors, pointing, nodding, grinning with child like excitement and giving thumbs up to car after car. It was very special.

And the icing on the cake came when I got a ride down from Morfasso to Castell’Arquato in a Metro 6R4 Group B Rally car (you can watch the film of this here).

Very few classic car shows these days let you get this close to the action. In many ways it felt a bit like Group B Rally of old. Yes there were Group B Rally cars taking part in the race which added to the nostalgic atmosphere. But here at the Best of Italy Race, petrolheads young and old could come together to experience the true nature of all these cars. It was loud, it was raw. It was spectacular!

Additional Photos from Best of Italy Race and Tour 2017