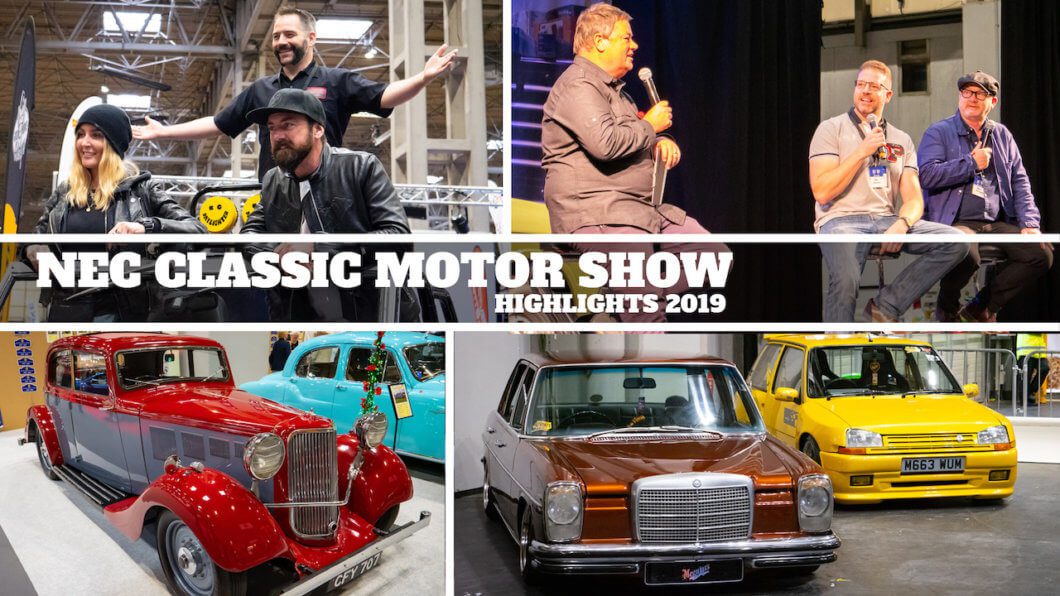 Over 71,000 classic car fans descended on the NEC in Birmingham over the weekend for the 2019 Classic Motor Show. This year was the shows 35th anniversary and classic motoring enthusiasts were treated to 3,000 cars and 300 clubs, all under one roof of the National Exhibition Centre. Take to the Road attended the show for the very first time and is still very much on a high after a buzz filled weekend.

If you’ve never been to the Classic Motor Show before, it is easy to feel a bit overwhelmed by it’s sheer scale. This really is the UK’s largest classic car show and then some. So much so that the smell of old cars actually wafts through the corridors as far back as Birmingham International train stations concourse! This years show was spread over six halls with an estimated 3,000 cars taking over a sizeable chunk of the NEC.

As well as the superb range of car clubs promoting their marques, there were live demonstrations, trade stands, the UK’s biggest autojumble, the Silverstone Auction and the Discovery Live Stage to keep visitors busy over the three day event.

Fans were also treated to special appearances from a host of personalities from the TV world, all presented by the Governer of classic car TV Mike Brewer. The Wheeler Dealer himself was master of ceremonies for the weekend and he gave fans a sneak preview of his brand new Wheeler Dealer’s Dream Car series, which will debut in January (stay tuned for an exclusive Take to the Road interview!).

Taking centre stage in front of the Discovery stand were the Goblin Works Garage crew, who were showing off some of their awesome custom car builds from Series 2, plus a few from their brand new third series which will be breaking cover in January.

Take to the Road got to chat to the Goblin Works crew, which was a nice follow on from our Series 1 interview with the gang and more recently with Jimmy De Ville himself for Series 2. The stand was literally mobbed as fans queued up for photos, with Jimmy stating that he was simply blown away with the response from the fans. Roll on Series 3!

Also on stage were Drew Pritchard and Paul Cowland from the hit show Salvage Hunters Classic Cars. They chatted to Mike about some of the cars they’ve bought and restored for the series. Plus they gave the lucky audience a sneak peak of some of the new episodes of the brand new series of Salvage Hunters Classic Cars, which will be airing in the new year.

Moving away from all the glitz and glamour, there were hundreds of car club stands to satisfy enthusiasts of every marque, with a few familiar faces among the crowds. Which goes to show that you can stumble into old car friends, even at the UK’s largest and most hectic classic car show.

One such meet was a rare 1978 Fiat x1/9 Lido that Take to the Road actually featured for sale back in 2015. Take to the Road has never seen a Lido in the flesh before and it was great to see this rare car on the x1/9 Owners Club stand. It is perhaps the most sought after of all Fiat x1/9 models, after the Fiat x1/9 Abarth Prototipo rally car, which was also on display on the club stand. What a pair of Italian stallions!

Next up was the 6R4.net club stand which had on display the Metro 6R4, the very car that Take to the Road experienced a passenger ride in at the Best of Italy race in 2016. Owner Dan Ellmore wasn’t there on the day, but fellow club co-founder Nicky Lindon showed us round Dan’s pride and joy. Since we saw last this pocket rocket, it has been subject to an engine and gearbox rebuild, tune up, new panels and new paint plus a few other tweaks. Quite a bit of work! All just in time for Dan to take it on his first ever rally stage race in a couple of weeks time!

The other Metro’s on the stand also saw action at last years 6R4.net Track Day at Curborough Sprint Course and it was great to see these beasts once again.

Another familiar face at the Classic Motor Show was Studebaker enthusiast Greg Diffen, who was displaying his wife’s 1963 Studebaker Avanti on the club stand. Take to the Road interviewed Greg and his two Studebaker GT Hawks back in 2016. Since the feature film he has sold his Hawk’s to refocus on the rest of his collection. But last year his wife bought his former Avanti, which Greg had actually owned when he first courted his wife in the late 1990s. Who said romance isn’t dead?! It was great to catch up with Greg at the show and talk cars and all things Studebaker.

Another club stand at this years show that is worthy of a mention is the Armstrong Siddeley Owners Club, which was marking 100 years since the marque was founded in 1919. Although the former Coventry based car builder stopped automotive production in 1960, the club has a dedicated group of enthusiasts who are helping to keep the name of the former British luxury car manufacturer in the public eye.

The Siddeley’s on display included some very fine coach built saloons from the 1930s right through to the final year of production in 1960. All superb examples from a firm that produced some of best engineered cars in Britain. Armstrong Siddeley is no longer with us but the marque very much lives on!

After a superb two days at the NEC, Take to the Road can confirm that the Classic Motor Show really is the biggest and the best. It really is a highlight of the calendar year and what a way to sign off on the classic car show circuit as winter draws in. And the good news is that the 2020 Classic Motor Show at the NEC has already been announced and will take place from 13-15 November. That’s good news all round for us classic car fans!