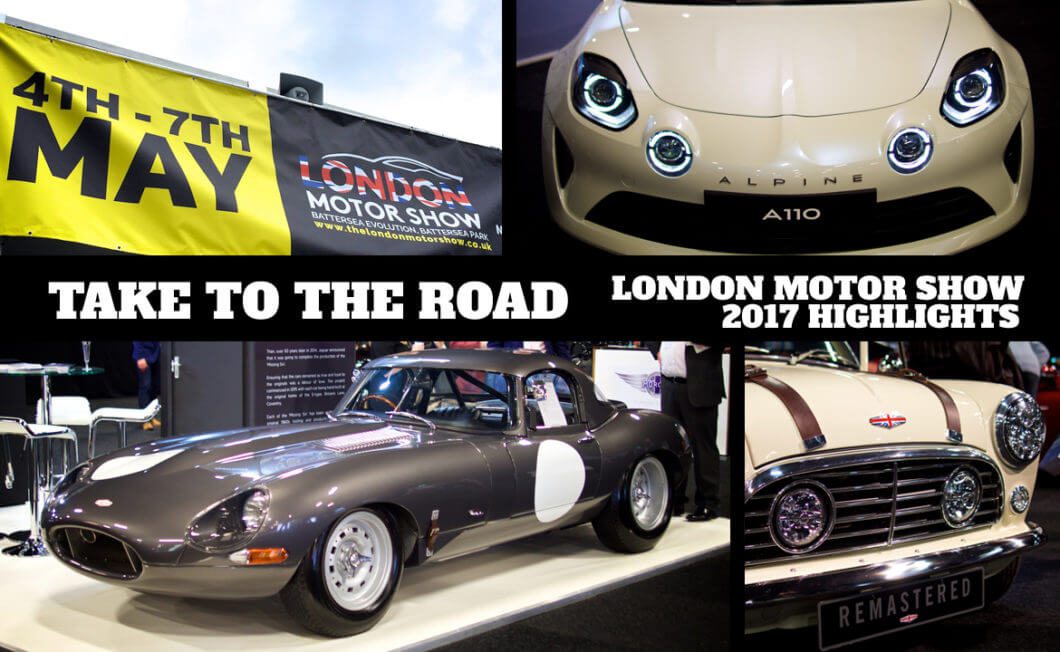 Last Thursday Take to the Road paid a visit to the 2017 London Motor Show at the Battersea Evolution centre in Battersea Park in London. It was actually my first time to visit the show and I was very kindly invited by Stratstone to get a sneak peak of their centre piece display, the Jaguar E-Type Lightweight Continuation Series. This was just a little bit exciting as it was the first ever public display of the rare continuation of the legendary lightweight E-Type. So I could not wait to get the to the show and spend some time drooling over the gorgeousness that is the Jaguar E-Type Lightweight.

The London Motor Show is not traditionally a show that leans heavily towards classics as it is more for modern cars and the launching of new models. Naturally on arrival I made a bee line for the classics, which included the E-Type, David Brown Automotive’s Mini Remastered, their Speedback GT and the new Alpine A110. Now some of you might point out that the Alpine is a new car and not a classic. This is indeed true. But for me the new re-imagining of the legendary French rally car was an instant classic as soon as it was unveiled last year. We’ll take a closer look at it in just a moment.

But first lets focus on, what was for me, the centre piece of the London Motor Show and that was of course the Jaguar E-Type Lightweight Continuation Series. For those of you already familiar with the racing version of the road going sports car, the Jaguar E-Type Lightweight was originally created in the 1960s. Eighteen cars were planned but only twelve were built, leaving six chassis numbers unused.

That all changed in 2014 when Jaguar announced they would be making six new Lightweight Continuation Series cars using the unused chassis numbers. Each car was to be built using the same hand built techniques and standards of the original car. Stratstone acquired car no 15 which is now currently valued at £1.5m.

For me the Lightweight or “Low Drag E-Type” as they were also called, is the pinnacle of the E-Type line. While the roadster and the 2+2 coupe are very pretty cars, the Lightweight takes that to a new level, enhancing what is already a pretty shape and making it more aggressive. The stance of the car is dramatically improved and it just looks meaner. But at the same time it retains the grace that was key design philosophy for so many of William Lyons designs. This E-Type is a very special car and I have to say a big thank you to Stratstone for giving me the opportunity to get up close and appreciate their Jaguar E-Type Lightweight.

Next up was the David Brown stand and their newly announced Mini Remastered. This was actually the UK Public launch of the Mini Remastered and I have to say I was intrigued to see what David Brown was offering. (I have already talked about this new take on the classic Mini in a recent news post which you can read here).

On display at the show was the Mini Remastered Cafe Racer model. At first glance this classic Mini is instantly recognisable but look closely and you will spot the subtle changes that David Brown has made to Alec Issigonis’ design icon.

Noteable changes on the exterior include the revised front grill and rear tail lights. Look more closely and you will notice that the car’s shell has been de-seamed, giving the body a more smooth and streamlined look.

On the inside the interior is the most luxurious you will ever see in a Mini. Everything you’d expect to find in a modern luxury car is here, from leather seats, to air conditioning, central locking, keyless stop start and a modern infotainment system.

The seats are very comfortable and I found the cabin to be spacious and airy. Little details like the arm rests, storage in the door cards, a glove box with USB sockets and a handy cupholder are all welcome touches that original Mini owners back in the day could only have dreamed of.

And customers who buy one of the 25 limited edition Cafe Racer’s can have a retro style racing helmet, which is very cool! I thought the Mini Remastered looked great. It combines everything you want in a classic with sensible modern upgrades. The Mini Remastered works for me!

Also on display was David Brown’s Speedback GT. This impressive looking 2+2 GT dwarfed the Mini. Much like the Mini it combined a classic look with modern refinements. And with a 5ltr Supercharged Jaguar V8, it is good for 0-60 in 4.6 seconds.

Not that this car encourages you to break the speed limit in a hurry. This car is all about luxury, highlighted by the lashings of wood, leather, aluminium and of course, the rear bench seat, which was just fantastic. The Speedback GT is an interesting offering and a complete contrast to the Mini Remastered.

My final task at the London Motor Show was to investigate the new Alpine A110 Premier Edition. I was as excited about seeing this as I was about seeing the Jaguar. I’ve wanted to see one in the flesh since the new sports coupe was announced by Alpine and Renault last year. And finally my wait was over! It really is a very pretty car and I spent a lot of time just looking at it.

The links to the original A110 are clear to see but the design is done tastefully and respectfully. The exterior lines are sharp but curvaceous, giving the car a compact, agile appearance. One that isn’t far off the original A110.

The interior is comfortable and spacious with nice bucket seats, quilted leather panels, carbon fibre and nice detailing that enhances the Alpine look and refers back to the original car. Modern tech touches include push button start, flappy paddle gear box, cruise control and a built in sat nav.

Sitting in the car for a few minutes it felt good, like a drivers car. And with a 1.8ltr 249BHP turbocharged engine installed in a body that weighs just 1,080kg, I expect the new Alpine A110 to more than just a little bit quick!

So while we wait on real world reviews of the A110 to emerge, we can sit back and enjoy what is a beautiful looking sports coupe that harks back to the rally history of the legendary Alpine A110. I can’t wait to get the chance to drive one!

So that’s it for my London Motor Show 2017 highlights. Maybe next year they’ll have a few more classics on display!